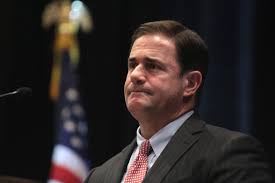 Since Gov. Doug Ducey signed the Arizona Opioid Epidemic Act in January of this year, opioid and drug related crimes are still a common occurrence in our state, according to Sgt. Mercedes Fortune.

On Wednesday, a subcommittee of the Homeland Security Committee held a meeting to discuss this opioid epidemic that has taken over the nation.

Ducey spoke on behalf of Arizona at the hearing about the current plans of action being administered to get a handle on this crime epidemic.

Ducey also said that the flux of crime has a lot to do with the number of drugs being carried across the border.

In Ducey’s testimony, he said Border Strike Force has kept more than 15 hits of heroin from coming into Arizona, but the opioid issue itself has “indeed reached crisis levels.”

According to the Arizona Department of Health Services (ASH), there have been over 1,000 suspected opioid deaths since last June.

Since Phoenix is the largest city in Arizona, with a population of nearly two million people, this crime issue is hyper-present in our community.

According to Neighborhood Scout, a website used to track crime rates in cities getting its data from all local law enforcement agencies, Phoenix ranks a nine on the safety scale with 100 being the safest.
Sgt. Mercedes Fortune of the Phoenix Police Department said it is too soon to see if the Opioid Epidemic act has helped decreased drug-related crime here in Phoenix, but “almost every call we respond to has a drug nexus.”

When someone searches “Phoenix crime rate” the first link to show up will be the Neighborhood Scout showing that Phoenix is seemingly very unsafe, but the Phoenix PD is looking to increase that number by doing their part to help keep the streets clean of opioid paraphernalia.

“As a police department, we work with many different entities to help our communities stay safe,” Fortune said.

ASH also reports that Naloxone, a drug used to treat narcotic overdose, has been administered more than 5,000 times since last June.

“In general, our officers do not carry Naloxone,” Fortune said, also adding that Phoenix PD are trained to contact fire personnel instead if there is a medical emergency such as an

Fortune did not say if officers will carry Naloxone in the future, or if fire personnel are only authorized to do so.

However, Ducey said nearly 1,000 law enforcement officers in the state have been trained to administer the anti-overdose drug.

Further attempts to put an end to this crisis include putting red caps on all opioid prescription bottles “to alert patients to the high-risk of these drugs and the need to keep them away from children, Ducey said.

“We have certainly made progress, but we know that this fight remains deadly and it is far from over,” Ducey said.