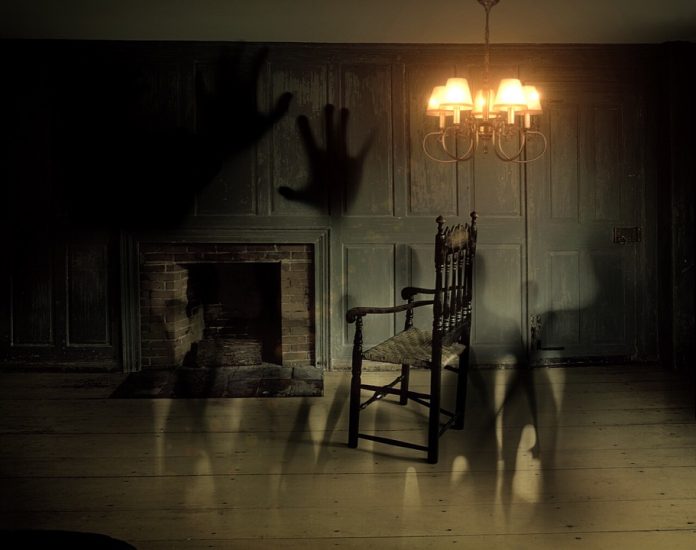 I remember as a child watching the television show Unsolved Mysteries and being scared out of my mind. Not only was Robert Stack and his voice quite terrifying, but some of those stories they had on there were spooky! I would have trouble sleeping for nights on end. Sometimes I would actually fall asleep under my bed so if an intruder broke in the house, they would not be able to find me. My little brother slept in the same room as I did, but I figured he was just a baby and an intruder wouldn’t even bother with him.

I had just moved into a huge 2,000 square foot apartment. It was in the upstairs of an old brick building that had recently been renovated. There was an antique store below me in the building, but other than that, it was just me. The store owners left around five each evening and then didn’t open back up until ten each morning. I thought it was the perfect place for a young teacher. The hardwood floors were original, but other than that, the whole place was brand new.

On the very first night I was questioning my sanity. A friend of mine was going out on the town that night for a few drinks. I gave him an extra key to my apartment and told him if he had too many, he could stay at my place instead of having to drive to his house fifteen minutes away. I said for him just to be sure not to wake me since I had to get up early the next morning to teach school.

It was a bit past 2 a.m. when I heard something. I am a heavy sleeper, and I have a small fan constantly running next to my head while I sleep. For something to actually wake me up, it had to be quite loud. I laid in bed listening as these heavy booted footsteps approached my bedroom. In my head, I thought that this had to be my friend just getting in after too many drinks. I thought he was probably drunk and getting ready to wake me. I continued listening as the footsteps were just outside my bedroom, literally a few feet from my bed.

Not wanting anything to disturb my sleep, I spoke loud and clear, “If someone is getting ready to interrupt my sleep, be prepared to have your butt kicked.”

The footsteps stopped right as I said it. There was complete silence other than my fan running. I waited and waited. I thought I would hear my friend’s laughter in a minute. There was nothing. I turned over and switched on the light. There was nobody in the room.

I climbed out of my bed and went through my whole apartment. My friend was not there. In fact, the front door was still locked. I actually went down to the small parking lot behind the building just to see if there was someone else around. My car was the only car there. I eventually went back to bed, convincing myself that I must have imagined everything.

As the weeks went by, I quickly realized I had not imagined anything. There were other things occurring, sometimes on a nightly basis. It was always between one and four in the morning. The footsteps happened frequently, but there was much more. Cabinets would open and slam in the middle of the night. The chairs at the kitchen table would scoot in and out by themselves. I would wake now and then to the faucet in the kitchen and in the bathroom running. My computer and television would turn on by itself. Hard, rapid-fire knocking was coming from inside my closets. Things were getting out of hand.

I thought of myself as a guy that did not rattle easy. I always enjoyed living on my own, and never felt like I should be alarmed about anything. This changed all that.

I did not share what was happening with anyone. Not even my friends or family. I felt like people would think I was crazy. As a school teacher, I did not want parents and their kids to be worried about having me as a teacher. In my head, I could see people rolling their eyes as I tried to confide in them.

Then one night, the unwanted guest turned it up a few notches. I was sound asleep with the fan on high next to my head, when someone or something sat down on the edge of my bed. I only had a full-sized bed, so it was a tight fit for even me. This thing that sat down was pressed up against my back as I laid on my side. I woke up right away, scared enough to lay still and hold my breath.

I waited and waited while this presence moved around on my bed. I kept my eyes closed the entire time. I didn’t want to see what was pushing against me. Finally, after a couple minutes, whatever it was stood up. I could hear the heavy booted footsteps walk away and leave my bedroom. Again, I searched the whole place after I regained my senses, but nobody was there.

I finally began to tell close friends and family of my experiences. I had waited six months to do so. Some would laugh, some would say they do not believe in ghosts, but a few were interested in hearing what was happening. I had ten friends in total spend the night at different times on my couch in the living room, skeptics and believers. One said they hadn’t heard anything. Five of them left in the middle of the night because too much supernatural stuff was happening. They couldn’t believe I had the ability to sleep through it. (It makes me wonder how much I slept through entirely.) Four of them made it through the entire night spooked out of their minds, and declared they were never going to step foot back in this place.

It all came to a breaking point in a few more months. Things were not letting up, and some nights I would sleep with all the lights on. At least once a week, something would sit on my bed in the middle of the night. Then it started to become worse. A few times I would awaken to something pushing down on my shoulders as I lay on my back sleeping. It would hold me down for a bit, and I would struggle to get to my feet.

Next, the unwanted guest became even more physical. I was getting these long scratches on my body as I slept. One morning I woke up with three long and bloody scratches on my neck. I tried to wear a shirt with a high collar to cover it up, but one of my students asked me first thing in the morning if a cat had scratched me last night and pointed to the marks on my neck.

I always thought that I was very tough. That I could handle just about anything. But after being assaulted by the presence, I decided it was best if I went ahead and found a new place to live. I told my landlords that I was leaving, and had explained what had been happening. I said they should make the place into a haunted bed and breakfast and make a killing (pun intended).

I bought a small house out in the woods close to a lake. It was entirely isolated except for one other vacant house on the street. People would ask me if I was scared living out in the middle of nowhere by myself. I would just smile and say I could handle it.

One day, the vacant house had a moving truck in front of it. An older couple were moving in. I was not going to be living alone on this street anymore. I was extremely busy for the next few weeks and didn’t get the chance to introduce myself to the couple. Then early one evening, there was a knock at my door. The woman from the other house on the street was standing there. After she introduced herself, she said this may sound crazy, but she was a third generation witch and even before they had moved in, she told me that she had been having dreams that she was sent here to rescue me. She asked if I believed in the supernatural.

It was not a normal introduction to a new neighbor. She seemed very earnest in what she was saying. I listened to her for a bit and said I keep an open mind to everything. Then some weird things started happening. But that story will have to wait for another time!