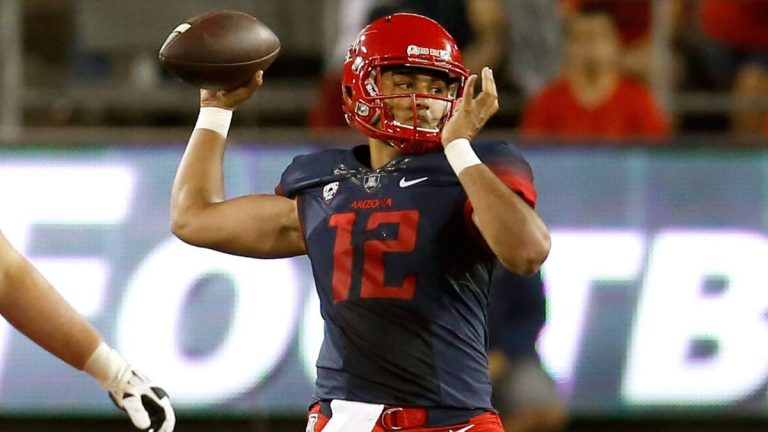 Fan favorite Anu Solomon has announced its intent to transfer schools on Tuesday.

Through a social media post on Instagram, the Arizona Wildcats quarterback wrote that he will be transferring from the University of Arizona, starting at an unannounced university to complete his senior year.

This announcement follows a disappointing season for the Rick Rodriguez-led Wildcats, dropping to a 3-and-9, earning them sixth place in the Pac-12.

As a senior, it is believed that Solomon will graduate before the next season begins in fall 2017. As a graduate transfer student, Solomon could be eligible to play immediately at an FBS school, which some speculate fueled his decision to leave University of Arizona.

Solomon played as the team’s starting quarterback in the 2014 and 2015 seasons. This year, he won the job coming out of training camp and started in the opening game against BYU. The following week, a devastating knee injury sustained during practice sidelined him for two months. He returned to the field in their game against Stanford on October 29, and started against Oregon State on November 19, but suffered a foot injury in the first half that sidelined him for the remainder of the season.

As a redshirt freshman in 2014, Solomon emerged as a star performer with great potential, passing for 3, 793 yards with 28 touchdowns and nine interceptions. He led the Wildcats to their first Pac-12 South title and earned them a berth in the Fiesta Bowl, making him a fan favorite for thousands of UA supporters.

With Solomon’s departure, there will be two scholarship quarterbacks remaining on the current Arizona roster, which are Khalil Tate, who started one game this season, and Brandon Dawkins, who started nine.

Two quarterbacks from the high school class of 2017 have committed to Arizona, including Rhett Rodriguez from Catalina Foothills High School and Braxton Burmeister from La Jolla, California.