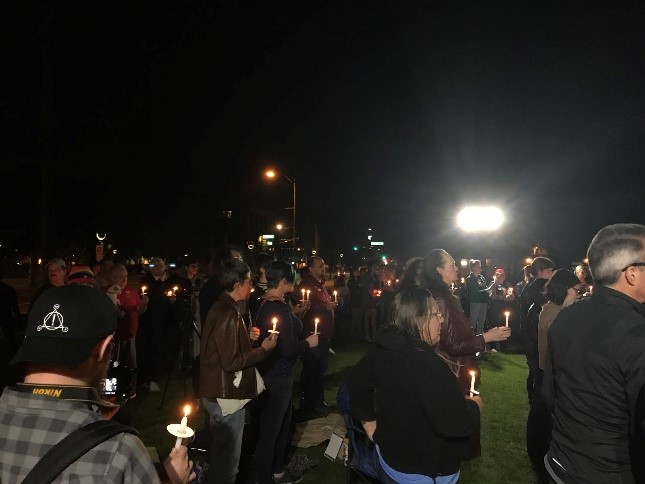 People of the transgender community gathered in front of the Capitol building on Tuesday evening for a candlelight vigil in remembrance of all transgender people who were murdered in the past year.

Kendra Tonan-Lizzarago, the president of TSAZ, said that the organization holds the candlelight vigil annually on Nov. 20 at the Capitol building, to not only honor those who were lost but to educate more people about the transgender community.

“Most LGBTQ organizations in the valley have some form of representation here,” said Tonan-Lizzarago. “I want people to come and learn and remember the people that were lost this year, and hopefully they will leave enlightened.”

Before the event began, those part of the community greeted each other with open arms, accepted candles that were being passed out and were preoccupied with the other activities available before the vigil. There were local art pieces made by the youth in community displayed as well as informational booths such as Aunt Rita’s Foundation, an organization dedicated to the elimination of HIV, and The Phoenix Shanti Group, a non-profit organization providing services to people living with HIV and AIDS.

Carnita Asada, a 33-year-old gender fluid community activist and host of the Queer Agenda, was one of the many volunteers passing out candles to be used during the vigil. She explained that she has attended the vigil for many years and it is important to attend these events to embrace everyone’s identities as a community even for those who have passed on.

“I think more than ever with certain politicians, they want to erase the transgender community or try to define them in ways that only they can define themselves,” said Asada. “I think it’s important embrace our differences that makes us so much closer in the community.”

TSAZ wanted to make the vigil as inclusive as possible for the entire community so from the beginning to the end of the vigil there were American Sign Language translators present and Spanish speakers to translate the prayers being said.

The opening prayer read by Sister Ivanna KnowU ended with a powerful inclusive message that resonated through the community members and allies present.

“To this we say Amen, A-woman, A-trans people, and all the rest,” said Sister KnowU.

After the prayers were said and the speakers, Eion Cashman, Brianna Westbrook, Dr. Neal A. Lester and singer Kaydee Cage finished their speeches and performance the community members stood together lighting their candles and listening to the names of the 369 reported murders of transgender individuals and gender-diverse people between October 1, 2017, and September 30th, 2018.

“Coming out to support the trans community is something very important to me because we are all people we are all human beings,” said Sister KnowU.

While the names, initials, or the country and sexual identity of the passed individuals were called out the community stood together in respectful silence with only sniffles and tear-stained eyes being present.

“Hearing the names of everyone who have died shows how much we have we have to grow as a country and as a world population, and it is really the most humbling experience you can ever have,” said Asada. “Even if you don’t know them, you do know them because we’re all connected.”