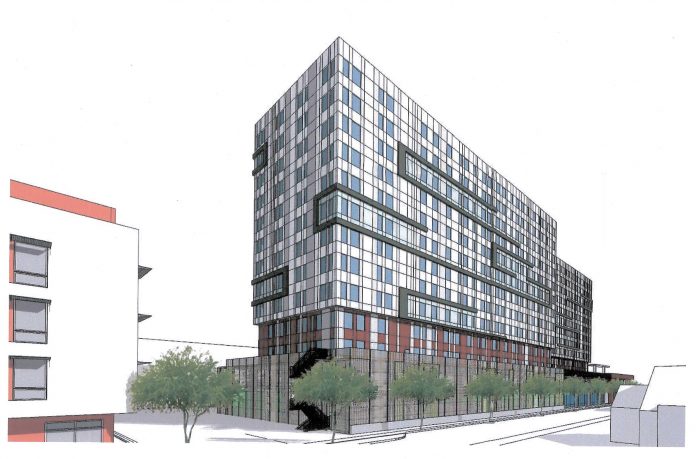 TEMPE, Arizona – With the City Council scheduled to hold a hearing this Thursday April 14,2016 to decide whether to adopt an ordinance for an Amended Planned Area Development Overlay for the Farmer Arts District development project, it may be helpful to take a trip back throughout the past decade to determine how the deal got to where it is today.

In his experience as an attorney, Huellmantel has represented a number of Tempe developers— many of whom have likely found themselves before the DRC.

More recently, Charles Huellmantel, along with his partner Todd Marshall, appears as the applicant on the Development and Disposition Agreement (DDA), as well as its three subsequent amendments, for the Farmer Arts District development project.

On January 18, 2006, the city announced a Request for Proposal (RFP) for two parcels of land located between Fifth Street and University Drive, from Farmer Avenue to the Union Pacific railway just west of Ash Avenue. In total, five companies responded to the RFP; Avenue Communities, Barton Homes, Inc., The Lab, SunCor and Farmer Arts District.

According to a document obtained from a confidential source, Best and Final offers, which were submitted on June 27, 2006, were listed as follows:

As part of the RFP process, respondents agreed to a standard evaluation process, in which each company is scored according to a number of criteria. As a result of this evaluation, per the aforementioned source, the five respondents scored as follows:

Following this evaluation, the source reports that the City made a rare decision to conduct a reevaluation, although the choice to amend the process was never made public. The results of this new evaluation are listed as follows:

Suddenly, things seemed to be going well for Farmer Arts District, who, after bidding lowest and coming in second in initial evaluation scoring, emerged as the highest scoring company in the second evaluation.

Next, in another unusual move, the City Council convened an Issue Review session to hear presentations from each of the developers, which was scheduled a mere two days after Final and Best offers had been submitted. During the session, which occurred on June 29, 2006, representatives from each of the respondents gave what was essentially a reiteration of their initial pitches to the council.

According to the minutes from the Issue Review session, “Mr. Huellmantel responded they are proposing a library of approximately 16,000 sq. ft.,” as well as a “linear park system from University to the lake,” which, he described, “has two pedestrian paths, one for walking and one for bikes or skateboards. There are also a number of hidden pocket parks to provide areas out of the faster-paced environment.”

At one point in the presentation, Huellmantel responded to a question about ownership and management of the proposed library, which the minutes indicate the group “are not asking for incentives.” Regarding a question about density he stated that there would be “112 workforce units and 85 market rate residential units, which is roughly 20 units per acre.”

Ultimately, Farmer Arts District was the winning proposal. On May 31, 2007, they entered into a Development and Disposition Agreement (DDA) with the City of Tempe. Curiously, by the time of the signing, the group’s original bid of $3,062,311 had come up significantly, with an updated amount of $6,200,000— $3,100,000 for Parcel 1 and $3,100,000 for Parcel 2. According to the contract, “the relevant portion of the Purchase Price shall be paid in full in cash by Developer at each Closing, subject to the City’s credit to the developer of the purchase of the Public Amenities as described in Section 2.10 and the prorations and other adjustments as hereinafter set forth.”

Put simply, in exchange for public amenities (park, library, etc.), the City essentially agreed to credit all but $50,000 of the price of the land back to Farmer Arts District. Some might argue that $50,000 is a far cry from some of the bids made by other companies.

In addition, the same company whose representative stated that they were “not asking for incentives” certainly received some big ones. In addition to a Government Property Lease Excise Tax (GPLET) incentive, which has essentially become a de facto perk for anyone developing in the area, the City agreed to dole out a Construction Sales Tax Rebate under which 100 percent of all construction sales tax revenue generated is credited back to the developer. The agreement also awarded Farmer Arts District a sales tax rebate, for a period of 15 years for an amount of $3.2 million which escalates annually at a rate of 8%. An additional incentive was awarded for $300,000 in Home Investment Partnership Program (HOME).

Throughout the years, three amendments have been made to the contract— the first and last of which have effectively extended the required time frame for acquisition and development. The first amendment, which was signed on November 19, 2009, gave the group an extension of 96 months (eight years) to complete the acquisition of the property.

Meanwhile, in Amendment Two, signed on November 4, 2010, the City moved to secure its $6,100,000 credit by requiring a priority Deed of Trust at closing. This ensures that the City is first in line to recoup their money in the event that a project ends in bankruptcy.

The amendment also required the builder to “provide not less than 100 underground parking spaces” on Parcel 2. This requirement was reportedly included as a means of retaining some value for the land. Because the park did not ultimately price out at $6.15 million, the prospect of the 100 spaces being given to the City would make it possible to recoup Public Amenities value.

The third amendment, which was signed January 14, 2016, contains extensive changes to the original DDA. According to Exhibit C, Farmer Arts District was given an extension of five years, meaning that by the time they are required to perform, the land will have sat for 15 years without once being re-appraised and adjusted for a current market rate value.

The amendment also deletes all language referring to the once-proposed library (5a), and the Linear Park, originally proposed as a 60 foot wide, 2,000 foot long park, changes to “a dedicated north/south public access way of 15 to 20 feet on average.”

In Section 5c, the amendment changes the previous requirement of a deed of trust, allowing the developer the option to substitute it with, among other possibilities, a letter of credit, which is comparatively less protective of the City’s interests. What’s more, the 100 underground parking spaces agreed upon in 2.9.2 of Amendment Two become 20 surface-level parking spaces in Amendment Three.

Perhaps one of the most intriguing aspects of the third amendment involves the fact that the Purchase Price and Public Amenities Purchase Price— $6.2 million and $6.15 million respectively— remain the same, despite the removal of the library and the significant change in size of the park. Interestingly, on page 14 of the amendment, Schedule 2.10 provides an itemization of the purchase. For parcel two, the 16,000 square feet office space, enhanced streetscape pedestrian pathway, and parking now comprise $4,082,468 of the total $6.15 million being credited back to the developer by the City, thus fortifying the $50,000 cash-in-hand requirement for the land.

This is where the Farmer Arts District development plan stands today. On December 23, 2015, about a month before the third amendment to the DDA was signed, Farmer Arts District filed a request for an Amended Planned Area Development (APAD) Overlay. This PAD proposed that the project at Parcel 1 be extended to a 13-story mixed-use development, containing 281 dwelling units and 1,641 square feet of retail, as well as a five-story office building and five story parking garage on Parcel 2.  By comparison, during the City Council Issue Review meeting on June 29, 2006, Huellmantel stated with regard to the buildings, “They are within the 50- foot limitation that the proposal suggests throughout the site, including the area at University and Farmer which allows for substantially greater height.”

On February 23, 2016, the Development Review Commission, of which Charles Huellmantel was once chairman, passed a motion to recommend approval of the PAD in a 6-1 majority. Since then, there have been two City Council hearings on the issue, with the final hearing continued due to time constraints. That final hearing will resume Thursday April 14, 2016 at 6 p.m.

Incidentally, the current chairman of the DRC, Paul Kent, is the owner of Flagstaff Extreme, an adventure course in Northern Arizona, of which Huellmantel is listed as Developer and Principal.  What is perhaps most interesting about this business relationship is that it has apparently not kept Kent from voting in the affirmative on projects involving Huellmantel. In fact, a quick search reveals that throughout Kent’s time on the commission, he has voted in favor of amendments on projects involving Huellmantel on several occasions (1, 2, 3, 4).  It should be noted however that Mr. Kent was absent from the February 23,2016 meeting when the Farmer Arts District Application was heard and voted on by the DRC in a 6-1 decision in favor of the application.

In summation, the history of this project is unique, with an underlying agreement that contains a variety of incentives and time extensions to deliver a project that reflects little of what was originally proposed.

An analysis of the public documents reveals Charles Huellmantel was serving as chairman of the DRC when Farmer Arts District submitted a proposal for the development of the land in question. His group was the lowest bidder in terms of land valuation.

Following an unusual evaluation process, his group emerged as the highest scorer. In his presentation, Huellmantel described a park and library as part of his proposal. His group won development rights, with the City agreeing to pay for public amenities (library, park) in an amount that essentially requires Farmer Arts District to pay $50,000 for the same land for which other bidders offered upwards of $14,000,000, and which may be worth even more today.

Furthermore, after expressing that the group was not looking for incentives, it received many of the incentives the City had to offer. Since the initial agreement, amendments have taken out the library and substantially decreased the size of the park, without affecting the amount the City is crediting to the developer.

To be sure, there are a lot of moving parts with regard to this deal. With the Council Meeting ahead and roughly five more years remaining on the agreement, only time will tell what the future holds for Farmer Arts District.

At the outset of this series on the Farmer Arts District saga, MyLocalNews reached out to Charles Huellmantel for comment. To date, no response has been received.

Editor Note: An editorial in reference to this article can be read by following this link.