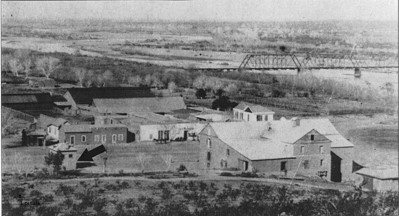 Four unknown reasons, when it was built next to an expansive shade tree about 1890, Tempe’s first identified jail was quaintly called the “Calaboose”  — derived from “calabozo,” a Spanish name for dungeon.

Although violent crimes were fairly rare in smaller towns, most communities still needed a place to temporarily confine their miscreants. Tempe was no exception.

No one quite knows for sure if the Calaboose was the first town jail. But its existence just southwest of the Hayden Flour Mill was long acknowledged. Until recently, however, its precise location and other information remained illusive. It took Archeology Consulting Services to flesh out the story.

ACS was contracted in the spring of 2006 to undertake a comprehensive archaeological survey of the Flour Mill site — from prehistoric times to the present day. The results of an 18-month study were compiled into a massive three-volume compendium.

The Tempe Historic Preservation office has made the complete report available online at http://www.tempe.gov/haydenflourmill/archaeology.htm

For years Sanborn Fire Insurance maps and one lone photograph provided what little was known of the Calaboose. Once part of the county jail network, it may have been overseen by Carl Hayden while he was County Sheriff from 1907-1912.

ACS discovered the Calaboose first appeared on an 1890 Sanborn map. And that the only known photograph showing the jail, long mislabeled as c1912 was actually made between 1890 and 1903. Using that information and other research, ACS narrowed down the Calaboose’s construction date as 1887 to1890.

With most of Tempe centered around Hayden’s Mill, it makes sense the jail would be built in the area of most activity. Whether Hayden paid for the building or permitted its construction on the southwestern-most corner of his property has yet to be determined.

The 1890 Sanborn map identifies the jail as a small, single-story, rectangular, brick structure with either a tin or slate roof. However the contemporary photograph taken from the Butte clearly shows a two-story structure.

Within the building, prisoners were confined in what was described as a “steel cage” — either locally made or purchased.

Through its fieldwork and research ASC has provided a significantly greater insight into the building’s history. Regrettably though, few accounts relating to the Calaboose or its occupants exist.

ACS unearthed tantalizing bits of physical evidence — an 1893 “V”-nickel, a 1908 Barber dime and some beads. Chicken and beef bones were also discovered. Whether the fare was served to the prisoners or consumed by their keepers is still uncertain.

The Tempe News reported the jail’s demise came on February 22, 1912 after Tempe’s first City Hall was designed with accommodation for a lockup in the basement. Apparently the Calaboose had to be demolished in order to move the “steel cage” to its new location.