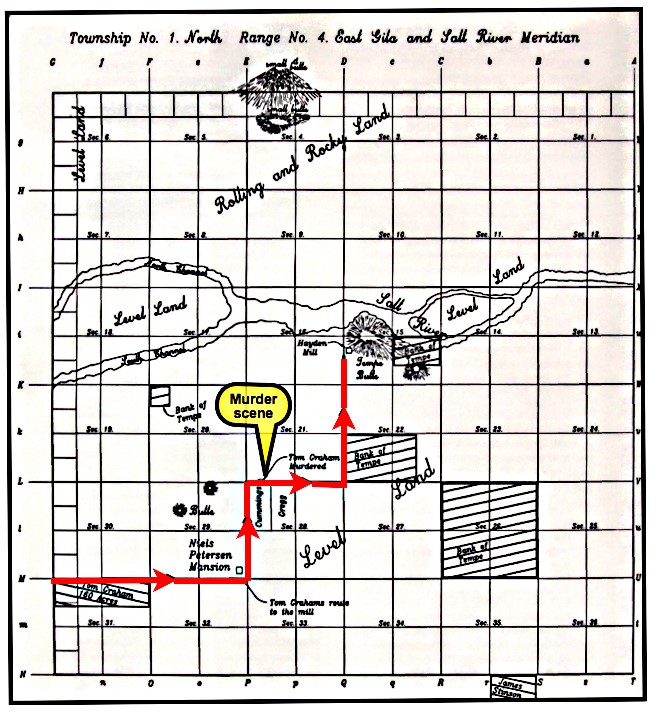 Originally published August 10, 2012 – Like the notorious Hatfield’s & McCoy’s feud in Kentucky, the range war between the Graham cattle family and the Tewksbury cattle and sheep family in Pleasant Valley about 140 miles northeast of Phoenix resulted in a decade of carnage.

As many as 50 were dead by 1888. Both families were all but annihilated – only one from each survived – Tom Graham and Ed Tewksbury. Leaving his guns behind and hoping to escape the brutal feud, the 38 year-old Graham along with his wife Annie and daughter left Pleasant Valley in 1892 for a more tranquil life on a 160 acre farm near the present–day intersection of 48th Street & Southern.

But the bitterness of the war continued festering. Just months after the move, an un-armed Graham was ambushed by Ed Tewksbury and Tom Rhodes who had married John Tewksbury’s widow.

After spending a night at the Arlington House on 3rd Street west of Mill Avenue, Ed Tewskbury rose early and joined Rhodes to carry out their carefully planned assassination. After Graham was left on the road with a mortal wound leaving him the 27th and final casualty the conflict imposed on his family, Tewksbury and Rhodes fled. Rhodes didn’t get far. He was quickly apprehended in Tempe by Constable Tom Elder. Fearing “…that a lynching would be attempted,” Elder transported Rhodes to the Phoenix jail.

According to a contemporary newspaper account: “During the forenoon a sensation was caused by Charlie Duchet, Graham’s partner in the cattle business, going down Mill avenue on the run, rifle in hand, with the avowed intention of killing Rhodes. He was persuaded (into not taking) the law into (his own hands) and bloodshed was (averted).”

Tewksbury, on the other hand, successfully executed a carefully planned escape back to Tonto Basin. Clad in a disguise and mounted on a powerful horse, Tewksbury headed east on the Mesa Road.

Writing about the incident, the Tempe Daily News reported “…a description was telephoned to the (Mesa) officers at that point which was received five minutes before the murderer reached there. A misunderstanding as to his description caused the officers to allow the fugitive to pass unchallenged…” allowing an unimpeded flight back to the safety of Tonto Basin. The only relic from that fatal day is Ed Tewksbury’s Winchester rifle now owned by his brother John Tewskbury’s great-grandson Bill Brown. Whether or not this was the weapon that actually dispatched Graham is still open to question.

Nonetheless it is an important emblem of the infamous feud. Brown has loaned the weapon to the Tempe History Museum where it is now on display. How many were killed by this rifle’s bullets, we’ll never know. But it remains a direct link to one of the nation’s most infamous feuds.

Were Tewksbury and Rhodes ever tried for the murder? We’ll take up that part of the story next week.