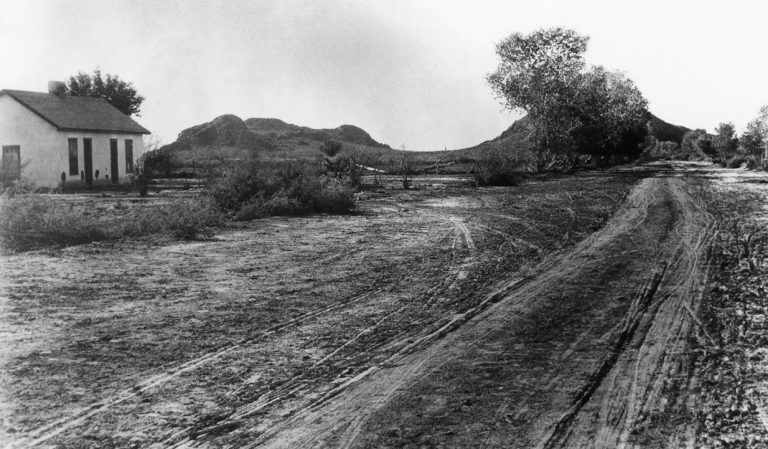 Originally published August 3, 2012 – Tuesday, August 2, 1892, 120 years ago yesterday, dawned like most August days in the Salt River Valley – stiflingly hot and muggy. If cooling monsoon rains were going to come, it would be late in the day, after giving time for the heat of the sun to build billowing, rain-bearing cumulus clouds.

The searing summer sun had already been up for more that two hours when handsome, 38-year-old Tom Graham started out from his 160-acre ranch southwest of town, with a four-horse team pulling a wagon load of barley from his first crop of the season. Graham expected to make the nearly three-mile journey to Hayden’s Mill in a little more than an hour – hoping to complete his delivery before the real heat of the day set in.

Earlier that year Graham relocated his wife Annie and daughter Estella from Pleasant Valley to a quarter-section ranch near present-day 48th Street and Southern Avenue. Graham’s trek to town took him along Double Butte Road, past the Double Butte Schoolhouse near the intersection of present-day Priest Road and Broadway. The simple adobe building was the school for children of farmhands working on ranches southwest of Tempe. What happened next occurred in plain view of the schoolhouse. It left an indelible mark on Tempe.

Graham’s wagon was between the ranches of Bud Cummings, and Tempe’s first physician, Dr. John Gregg. “…when, hearing a noise of horses’ feet behind him, (Graham) turned to see his mortal foes, Ed Tewksbury and John Rhodes in the act of leveling their rifles upon him,” reported the Phoenix Gazette.

“Graham, who was unarmed (since leaving Pleasant Valley), at once started to jump from the grain sacks, upon which he was seated, but was too late. Two shots rang out in almost perfect unison and he fell from his wagon onto the road with a mortal wound to his body.”

“The murders coolly rode up,” continued the account. “…Tewksbury…rode over to the prostrate man, and once more leveled his gun with the evident intention of finishing him. He was apparently satisfied, however, that the wound already inflicted was a mortal one…and rode rapidly away.”

Gregg’s 16-year-old daughter Bettie was milking cows nearby. Startled by the gunshots, she looked up to witness the carnage. First on the scene, Gregg was instrumental in helping move the mortally wounded Graham to Bud Cummings’ porch. Although the bullet severed Graham’s spine, paralyzing him from the neck down, he could identify his assassins by name. Before he died about 4 pm, Graham was able to say goodbye to Annie and his daughter.

The savage crime so mesmerized the Valley that it remained front-page news in the Arizona Republican for eleven days. All that remains of that tragic day is Ed Tewksbury’s rifle. It’s now on display loaned by John Tewksbury’s great-grandson Bill Brown. I’ll tell you where, and continue the story next week.