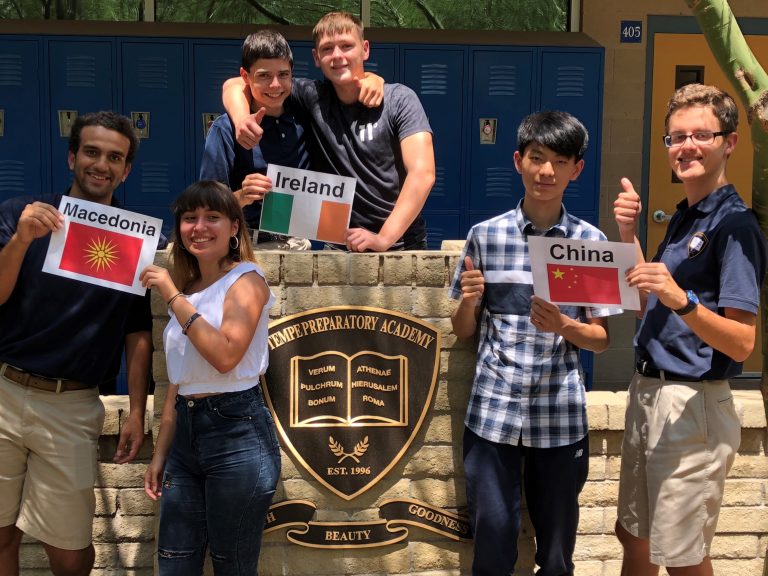 How would it feel to live in another country with another family for a whole month? Three Tempe Prep students share their experience of traveling to a different country and living the lives of different people. Isaiah Chadwick, Peter Surin, and A’ser Mostafa, all current Tempe Prep seniors, share their involvement in the Tempe Sister Cities program.

The program takes place the summer after junior year. Each student commented on the competitiveness of the applica­tion process. Peter states, “the process was pretty rigorous,” and Isaiah describes further, “there’s three interviews. The first one focuses on politics and yourself, and current events. The second one is more on politics – how America’s doing with the economy. For the final interview you need to know a bunch of information on the 10 Sister Cities of Tempe.”

A’ser especially highlights challenging aspects of the process: an examination of personality, political knowledge of both the United States and the country of choice, and a dinner with all the other candidates. While this process seems daunting, A’ser assures “if you just keep your head screwed on tight, you can get through it, no problem.”

Peter talks of his experience in his coun­try of choice, China, specifically Zhenji­ang, China. “I chose this [city] because I am very interested in China, I’m learning Chinese. I wanted to find the culture that was most different from my own and really learn about it.” Peter only holds positive praise for his host family and brother in China, but remarks on the slight homesickness he felt while away. Peter comments on the differences between his home life in Arizona and China, nam­ing the differences in food as well as the language barriers as challenges he faced. “Living a different life was a very enlight­ening experience.”

Despite the trials Peter went through, he still holds an optimistic outlook on his life in China. While in China, Peter visited multiple different cities and went to numerous tourist attractions, including the Terracotta Warriors, the Great Wall of China, and many Buddhist temples. Peter mentions the “very complex and interest­ing architecture” of the Buddhist temples as one of the highlights of his trip. Peter states that Tempe Sister Cities program is completely worth it and encourages all juniors to definitely apply to the program.

During his summer, Isaiah traveled to Carlow, Ireland, where he lived with his Irish family. Isaiah speaks of his time with his host family and the novelty of living as a regular Irish person. He explains his ancestors lived in Ireland, which acts as a main reason for his visit there. While in Ireland, Isaiah participated in plenty of adventurous outings with his host brother, including cliff jumping, adventure courses, and visiting beaches.

While Isaiah enjoyed his trip to Ireland, one of the biggest challenges he faced was living independently: “You’re thousands of miles away from your parents, you’ve got to learn how to live alone.” Unlike Isaiah, Peter, did not have to overcome the challenge of a language barrier, although, that did not stop him from learning some Irish anyways. Isaiah learned much from his trip to Ireland, including knowledge of Irish culture and this impactful piece of information: “Even though we have teenagers on the other side of the world, they’re not nearly as different as I thought they were.”

A’ser chose to go to Skopje, Macedonia, over the summer. A’ser shares his inter­est in the Balkan eastern Europe region, remarking on the hardships the area has been through in the last 20 years. “I thought it would be really cool to get to go to a country where you don’t necessarily have a super-preconceived notion of what you’re going to expect.” While he greatly enjoyed his time with his host family, A’ser comments on some cultural differ­ences he faced, such as differences in meal times, public and social interactions, and language barriers. While in Skopje, A’ser did a variety of activities, including canoe­ing, hiking, touring the city, attending concerts, along with day-to-day activities like hanging out with friends.

A’ser mentions, “Macedonia is a very young country, so a lot of the people there … are younger, so during the summer … they plan all these festivals and open air concerts.” In addition to all these rec­reational activities, A’ser visited many different historical and religious sites. He mentions sites like the house of Mother Teresa, mosques, churches, synagogues, and even a running monastery from the 11th century. A’ser mentions he especially appreciates the history of the country: “It’s a country with many different histori­cal figures, such as Alexander the Great, Mother Teresa …” Along with his appre­ciation of the history, A’ser also praises the people, commenting on their kindness and respectfulness.