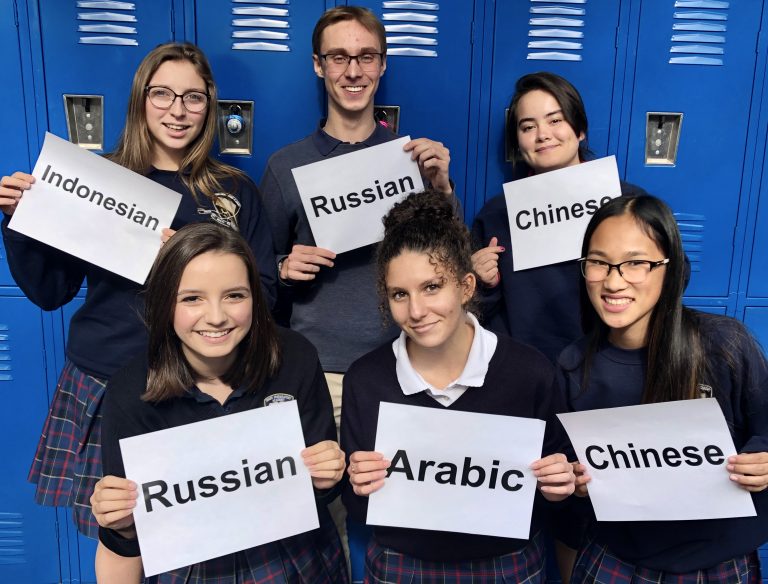 How would you like to travel to a unique country over summer for free? The National Security Language Initiative for Youth is a program that provides scholarships from the U.S. State Department for high school students to learn less commonly taught languages in summer and academic-year overseas immersion programs. This year, Tempe Prep has six semi-finalists in the prestigious NSLI-Y program. These students are all interested in learning a unique language and visiting a new country to experience a different culture.

Tempe Prep senior Rochelle Lilly has applied to study Chinese and travel to China. In her junior year, Rochelle was accepted to the NSLI-Y Chinese summer program. She said she loved her Chinese host family and the culture made her want to do a gap year college in which she can hopefully travel to China again and become fluent in Mandarin. Rochelle first applied because she was intrigued by the idea of studying a non-Western language such as Chinese or Korean.

She says, “I was really drawn to the aspect of language learning by immersion and being forced to practice your skills from the classroom. I’ve also always dreamed about studying abroad in an Asian country since I was in 7th grade.” Rochelle has a sibling in college and is very thankful that the NSLI-Y scholarship can make her dreams come true.

Freshman Catherine Ross has also applied to study Mandarin Chinese. Catherine has been studying Mandarin at a Chinese school since she was only seven years old. Because she was adopted from China, Catherine has always been interested in learning about the Chinese culture. The NSLI-Y program makes it possible for her to experience it first-hand. She wanted to learn more about her culture and was interested in the idea of doing so by studying a language abroad rather than learning in a classroom.

She says, “I feel that this program would help me become fluent in Mandarin and I would learn so much about my race and culture.” Catherine, wants to deepen her appreciation for authentic Chinese culture and in doing so, discover more about where she is from.

Tempe Prep junior Noah Frazier has applied to study Russian. Noah has always found language fascinating and is very interested in traveling and studying abroad. He says, “I want to go to Russia because my mom spent a long period of her life living in East Germany which was a Russian controlled area, and that gives me a unique connection to the country. Speaking another foreign language is really beneficial for many different careers, including medicine and scientific research, which is what I’m interested in.”

Noah hopes to gain a broader worldview and is very thankful to have the opportunity to do so. Noah has been teaching himself Russian for a few months now and has been accepted into a new program called Virtual NSLI-Y and received a scholarship to take a three-month online Russian course for this semester.

Junior Sierra Smith wants to go to Russia as well. Sierra was accepted to the NSLI-Y program earlier this year and traveled to Russia over the summer. She has applied to go again because she found it to be such a life changing experience. However this time, she has applied for an entire academic year.

She says, “I wasn’t sure if my previous summer in Russia would help or hinder my chances of acceptance. Two months later, I happily received my semi-finalist letter.” When asked what made her want to apply again, Sierra said, “I fell in love with the language, and now I am interested in majoring in Russian in college. So, living in Russia for an entire academic year is the perfect fit!” Sierra learned so much on her last trip and really bonded with her host family.

Tempe Prep junior Sama Allam has applied to study Arabic. She has learned some Arabic from her parents and hopes to learn more. She says, “I’ve chosen to study Arabic for an academic year so I can improve what skills I already have in the language and form intercultural connections in my host country.” She finds NSLI-Y to be a great program because it provides high schoolers an amazing opportunity to study a language abroad that cannot be found anywhere else. This program would also allow her to learn so much more about her cultural background and explore her identity.

Sama has applied to study Arabic for an entire academic year which would allow her to become completely immersed in this culture and tremendously expand her knowledge of the Arabic language.

Junior Clara Moffitt hopes to study in Indonesia because she found it to be one of the less common options and wanted to experience an extremely unique culture that she thinks would be fun to immerse herself in. Indonesia is the world’s largest island country, with more than seventeen thousand islands She says, “NSLI-Y chooses those languages because they see them as critical languages to learn that are important to the government and maintaining world peace… I thought if Indonesian is on the list, then it must be important. I feel like not a lot of people are learning that.”

She considers it a great opportunity to learn a unique language that is also important to helping the world, which would help NSLI-Y achieve its main mission of helping students learn less commonly taught languages by traveling to different corners of the globe.

These students all have something in common: They have a great appreciation for other cultures and hope to learn a unique language that interests them. They have applied to be representing the United States, Arizona and Tempe Prep all over the world. Let’s wish these six students luck in the program!

About Tempe Prep: Tempe Preparatory Academy is a tuition-free public charter school in Tempe for students in grades 6-12 that provides a nationally acclaimed liberal arts education based on the Great Books of Western Civilization with an exceptional math, science, foreign language, humanities, and fine arts curriculum. Tempe Prep has been recognized by the Arizona Board of Regents as having the highest percentage of college graduates in the state and has been named the #1 high school in Arizona by Newsweek (America’s Top High Schools 2016). For more information about enrolling at Tempe Prep, including Tempe Prep’s High School Information Night on Thursday, January 30 at 6:30 pm for students in grades 8-10 and their parents to learn more about the exceptional curriculum and robust extracurricular activities at Tempe Prep, visit the school’s website at tempeprep.org.