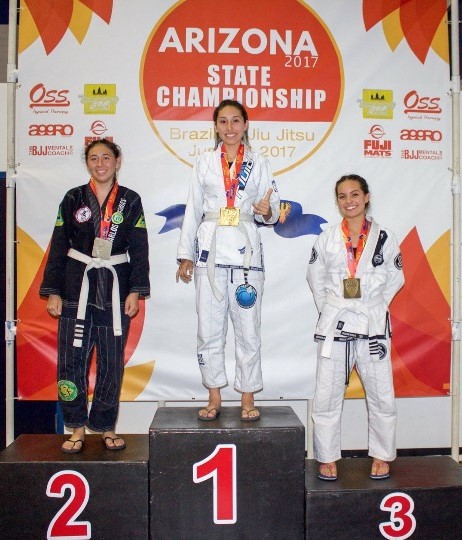 To stay healthy, some people run. Others might do volleyball or golf or maybe even fight people. Although the last type is very rare, one of Tempe Prep’s Seniors does this for sport and excels at it. Tempe Prep Senior Izzy Werner has been practicing Brazilian Jiu Jitsu since her Sophomore year and recently won the State Championship in her division.

She never sought out the activity. “I got into Jiu Jitsu because I live near school and we go to Sprouts. I just happened to see it and we decided to go in. My mom went first without me be­cause I was still doing cross country. After that ended, I tried it too and I liked it and I have been doing it for two years now.”

“I liked it because I felt like it was more personal [than most sports]. Rather than be­ing part of a team, I can have my own personal goals to reach so I can better myself. The system already has goals set into the system, so that is helpful. The belt rank­ings go white, blue, purple, brown, black. I recently got a blue belt, which was really exciting! It is the first major personal achievement I’ve made.

“Now I’m finally past that novice stage, especially because most people I practice with are blue belts and a few are purple.” In order to reach this goal, Izzy bravely chose to prac­tice with many people much more experienced than she is. “Even though I’m not the youngest one there, some people have been doing BJJ since they were just toddlers or have been competing for decades.”

Although practice can be fun and relaxing, the com­petitions can be different. “Competing is very chal­lenging because it’s totally different from what I was accustomed to. For my first competition, no one was in my division so I didn’t get to compete. For my second competition, the same thing happened so I had to fight a boy, which was interest­ing. For the first few, I let the nerves get to me, but as I grew more confident and comfortable, I began to do better. I got gold in the last two white belt tournaments I competed in [making me ranked first in the state for my division]. Now that I’m in blue, it is a bit more dif­ficult. The difference in level is very significant.”

Although Izzy has to face tough, experienced oppo­nents, she uses their power as motivation. “As the people around me have improved, I’ve realized I have to up my intensity as well. Everyone is pro­gressing, but so am I.”