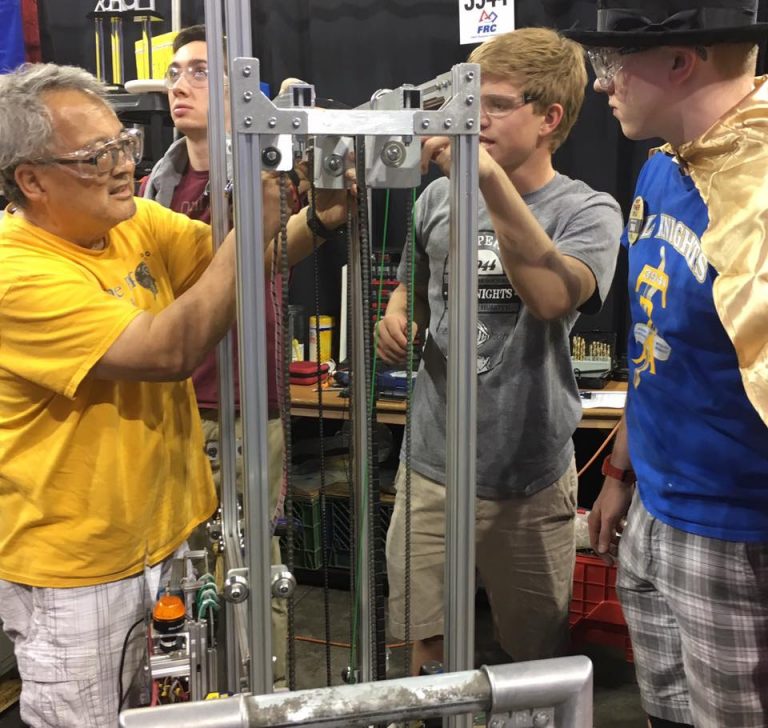 In the three years that I’ve been writing in De Equitibus, Tempe Prep’s student newspaper, I’ve noticed that robotics articles are some of my favorite articles to write. At first glance, robotics might seem a bit boring; you might think of members staring at computer screens and making blueprints the whole time. This is a real aspect of the team, but so are problem-solving discussions, hands-on work, and the occasional team member goofing off. Robotics doesn’t always take center stage in the school news, but it contains some incredibly dedicated and creative people at Temp Prep.

This last tournament was not the most successful in the Tempe Prep’s robotics history, and the robot had its share of problems. According to Olek Piechaczek, the whole building season was delayed by the late arrival of new parts. This kept the team working right up until tournament time, and they did not have a chance to practice with the robot beforehand. On competition day, they misunderstood a scoring rule and ended up giving more points to the oppos­ing alliance. It was a rough tournament.

The TPA robotics team may have met a bump in their winning streak, but the seniors will still be leaving with good memories.

For Sammy Nagy, robot­ics has been a mixing pot of practical experience and long-lasting memories. He says, “Robotics has been a part of my life since 8th grade, and I’ve become pretty close to a number of people from all over the state over the past couple of years because of it. For many of us looking to pursue STEM-type careers, robotics has been an incred­ible creative outlet, allowing us to design, build, and solve problems like actual engineers. Some of us (myself included) have grown to like the program so much that we plan on becoming men­tors for other teams around the country after graduation. I know we have one of the state’s most competitive, focused, and determined teams, and I know they’ll go on to win regional, state and even national championships in their future.”

His favorite memories are when Spencer Will fought the announcer of a tourna­ment, when they found out they won their regional in 2014, and singing Non Nobis at the Rams stadium after making it to the world championship semifinals.

Olek has mixed emotions about the end of his TPA robotics career. “I do feel sad to leave something that so radically changed my life for the better,” he says. “But, see­ing as how heated things got between the mentors and I, I do not fully regret this be­ing my last year. This year was just overall tough because all the seniors were busy between college apps, senior thesis, other clubs that we really couldn’t put as much time into robotics as previous years. And all this has taught me to be a better plan­ner and more kind-hearted leader. I will definitely continue being a part of robotics during my college time because I don’t think I could ever give that up.”

The excitement of a robotics tourna­ment is one to remember. Blake Carter says, “My favorite memory was placing second at the state competition; hopefully next year we can up that and place first! I’ll miss the competition experience and all of my teammates.” Cameron Pickard’s favorite memory is also placing second at state. He says, “The energy we had going into that is something the underclassmen are going to keep through next year.”

Jacob fondly remembers the achieve­ments and the people: “Over the four years my favorite memory definitely was getting 5th in the world at nationals; it was a re­ally fun once-in-a-lifetime trip. In the past year it would be leading the scout team with enthusiastic scouters like Jordan and Blake.”

For Daniel Burgin, the tenacity of the team made a lasting impression. He re­calls, “Throughout the entire competition at regionals this year, the team was strug­gling to get the robot working and it only really got to a stable state when there were 2 or 3 qualification matches left. Despite the team’s earlier struggles in the competition we put on a good performance in the last few qualification rounds. This caused us to be picked by the third seeded alliance in the finals. Even though we lost in the end the fact that we sprung back like that was still amazing.”

Congratulations to these Knights for all their hard work and we look forward to seeing what they will do in the future!

Article by Rachel Dinh, a senior editor and student staff writer for De Equitibus, Tempe Preparatory Academy’s student newspaper, who will be attending University of Notre Dame in the Fall on a full scholarship as an AnBryce Scholar.