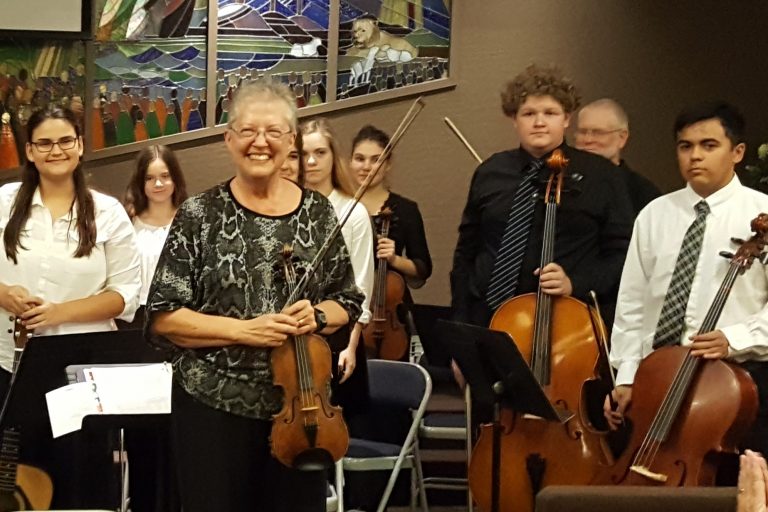 Many Tempe Preparatory Academy students know that their music teacher and Sinfonia director, Mrs. Wilkison, was in the Phoenix Symphony, but not many know how hard she worked to get there. Mrs. Wilkison grew up in a musical home. She was the youngest of her siblings who all played instruments and she wanted to do everything her siblings could. She began her music training at a very young age and began piano lessons when she was only three years old. She began guitar at nine years old and violin at ten. She later learned how to play the viola as well! When Mrs. Wilkison joined a youth orchestra at the age of eleven, she knew that her passion for music would be a huge part of who she was.

Mrs. Wilkison found out she has perfect pitch at the age of two. She says, “When I was two, while taking a nap and listening to one of my sisters play the Chopin Revolutionary Etude and struggling with a passage in which she knew something was wrong but couldn’t figure it out, I shouted out from my bedroom, in complete exasperation, “It’s supposed to be an F#.” My mom immediately began to test to see if I had perfect pitch.”

Mrs. Wilkison worked diligently and with invariable determination to achieve the skill level that she has. She had private violin lessons from age ten through high school, in addition to playing in a fantastic school orchestra program and youth symphony system in Los Angeles. Then she had three years of college and two years of grad school, during which she typically practiced 6 to 8 hours per day! Mrs. Wilkison joined the Phoenix Symphony at age 22 in 1976.

To audition for the Phoenix Symphony, Mrs. Wilkison had to play some of the hardest pieces that the Symphony plays. There were rounds where they would narrow down the candidates for a certain position. The process was very competitive for Mrs. Wilkison. She explains, “For a symphonic-musician wannabe coming out of college and grad school, the competition for a spot in a professional orchestra is mind-blowing. When I read about the opening in Phoenix and sent my resume, they whittled the pile of resumes down and invited 200 to the audition. I think every such musician used to learn to dread the word ‘next?’ Anyway, I got the job!” She learned to play masterfully while being her own harshest critic, expecting near perfection from each one of her performances.

During her 30 years with the symphony, Mrs. Wilkison has many memorable stories. She tells one of her favorites: “We used to divide into smaller groups to go out into the community. My group went several times to Phoenix Children’s Hospital. Each was memorable, but just as an example, we would always finish our performance, then invite children to come to the podium and ‘conduct’ Mozart’s Eine Kleine Nachtmusik. Our stage manager lifted one excited little girl onto the podium, who waved her hands as well as she could while we played. That night, it was shown on closed circuit TV in the hospital. She asked her parents if everyone in the world was watching her, and said it was the best day of her life. We received the letter from her parents a few days later, thanking us and saying that she had died the following morning.” This heartwarming story truly shows how impactful music can be on peoples’ lives.

Mrs. Wilkison has some advice for TPA students hoping to learn an instrument: “Do not be discouraged by early struggles. For my first year playing violin, my mother told me she used to go into the next room and turn the TV on as loudly as she could get away with without distracting me in hopes of drowning out all the squeaks and squawks. Practice regularly. I did not always practice long hours when I was young, but a small amount of focused practice regularly works wonders.” This advice can apply to goals that are not music related as well!

When she found out that she had arthritis in her hands and decided to leave the symphony because of it, Mrs. Wilkison was not ready to retire yet. She found that her love for teaching had grown exponentially and decided to pursue it. She earned a Masters of Education degree while she started teaching and then the opportunity arose for her to come to Tempe Prep. We are so lucky to have such an extraordinary teacher at our school who has such great experience in her field.