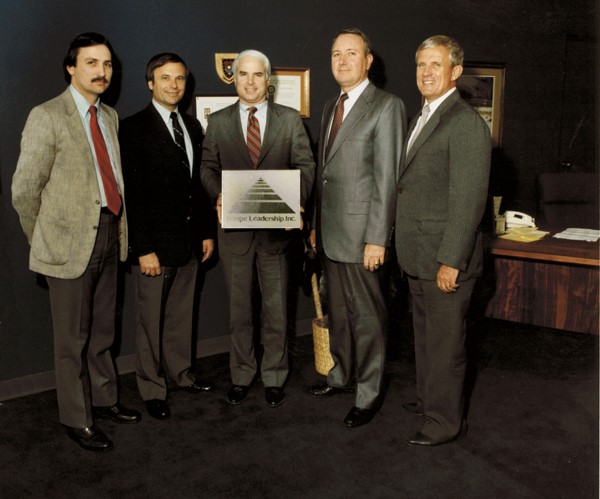 Originally published April 2, 2010 – What do you remember about 1985? Back to the Future was the top grossing film. We Are the World won a Grammy for Song of the Year.

Robert Ballard found the Titanic 2.5 miles below the cold waters of the North Atlantic.

Closer to home, the New Times in its Best Of issue declared Old Town Tempe the “Best Place for a Walk.”

By 1985 the once sleepy agrarian and University town had emerged as a powerful force in the Valley. A need for developing future leaders became apparent.

It came April 19, 1985 in the form of Tempe Leadership, Inc. when a first-term Congressman named John McCain, along with Mayor Harry Mitchell kicked off a recruitment campaign for Class I.

The accomplishments of Tempe Leadership and its hundreds of graduates over the last twenty-five years are well documented. A quarter century of contributions to the community is the powerful legacy of this important program.

How Tempe Leadership came to be is a fascinating tale of tenacity.

It begins with Tempe resident Hari Khanna, a planner at the Arizona Department of Transportation, who graduated from Valley Leadership Class IV in 1983.

Although not even a Chamber member, but recognizing the Tempe Chamber was the best organization to sponsor a leadership program, Khanna approached Executive Director Dennis Ricardo with just his plan in 1983.

Although intrigued by the idea, Ricardo didn’t offer much encouragement because the Chamber just couldn’t afford to take on an additional expense.

Unwilling to take no for an answer, Khanna began pressing Paul Wolfe, publisher of the Tempe Daily News. Wolfe supported Khanna’s vision ─ and used his paper as a bully pulpit, to promote the idea.

Meanwhile Khanna continued pressuring the Chamber. He even joined its ranks in 1984 to strengthen his lobbying efforts.

After nearly a year of cajoling Ricardo, Khnanna met then-Chamber president Don Cassano who recalls first talking to Khanna about Tempe Leadership “…over a glass of iced tea on a summer day.

Keeping up the pressure, Hari told Cassano “…(you) could become famous as the man who started Tempe Leadership.” Cassano (who served on the City Council from 1984-1994) convinced the Chamber Board to approve a Tempe Leadership program.

Graduates are a Who’s Who of local leaders ─ we’ll explore that part of the story next week.

Tempe Leadership will celebrate its 25th Anniversary with a gala celebration at the Tempe Arts Center April 9th from 6:00 – 10:30pm. Call Magdalena Warecka (480) 736-4281 for more information