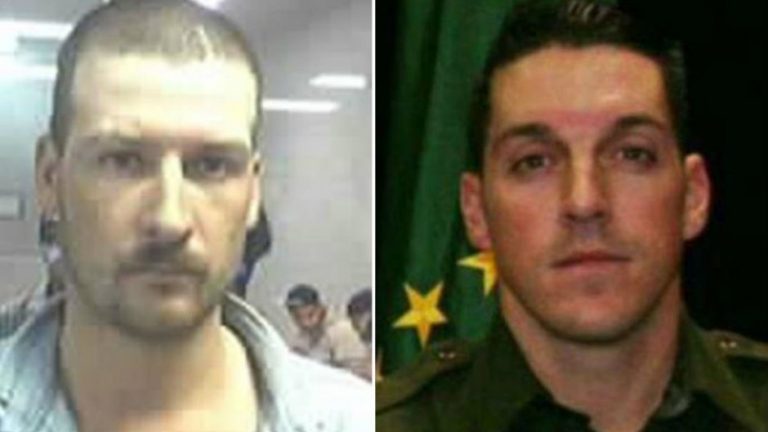 A suspect in the brutal killing of Border Patrol agent Brian A. Terry eight years ago has been extradited to the U.S. to face trial for his crime.

Investigators believe Heraclio Osorio-Arellanes is the sixth man to play a role in Terry’s 2010 slaying. Osorio-Arellanes, a Mexican national, has been charged with first-degree murder and was extradited to the U.S. on Tuesday, July 31.

Attorney General Jeff Sessions and U.S. Attorney Adam Braverman for the Southern District of California made the announcement this week as Osorio-Arellanes appeared in U.S. District Court in Tucson on the afternoon of Wednesday, Aug. 1. Donning ankle shacks and translation headphones, he submitted to detention and was escorted out of the courtroom by U.S. Marshals.

Osorio-Arellanes will be detained as his trial is slated for September 11, 2018. He must submit a plea by August 24. Mexican authorities arrested him on April 12, 2017, and he has been in custody awaiting extradition since then. Prosecutors say Mexico will not extradite suspects in cases where there is the potential for the death penalty. If convicted, Osorio-Arellanes faces a life sentence.

His charges include first-degree murder, second-degree murder, assault on a federal officer, conspiracy to interfere with commerce by robbery, attempted interference with commerce by robbery and use and carrying a firearm during a crime of violence. The indictment alleges Osorio-Arellanes is not only responsible for the murder of Agent Terry, but that he also assaulted the others who were on patrol with Terry during the deadly firefight with the “rip crew.” This includes U.S. Border Patrol Agents William Castano, Gabriel Fragoza and Timothy Keller.

“The Department of Justice is pleased that the suspected killer of Border Patrol Agent Brian Terry has been successfully extradited to the United States and will now face justice for this terrible crime,” said Attorney General Jeff Sessions in a recent news release. “We are grateful for the efforts of the Federal Bureau of Investigation, U.S. Marshals Service and U.S. Customs and Border Protection as well as our law enforcement partners in Mexico. To anyone who would take the life of an American citizen, in particular an American law enforcement officer, this action sends a clear message: Working closely with our international partners, we will hunt you down, we will find you, and we will bring you to justice.”

“The arrest and extradition of Osorio-Arellanes reflects the steadfast commitment and tireless work of the United States and our law enforcement partners in Mexico, who shared the common goal of seeking justice for the murder of Agent Brian Terry,” said U.S. Attorney Adam Braverman in the news release.  “When an agent makes the ultimate sacrifice while serving his country, we must hold all the individuals who played a part in this tragic outcome accountable for their actions.  This extradition moves that important goal forward.”

The U.S. Attorney’s Office for the District of Arizona is recused as the investigation is led by the FBI. Special Attorneys Todd W. Robinson and David D. Leshner of the Southern District of California are prosecuting the case in federal court in Tucson. The Mexican government assisted in arresting and extraditing Osorio-Arellanes, while the Justice Department’s Office of International Affairs also assisted.

Terry’s murder sparked national outrage when it was discovered the guns used in the gun battle were supplied by the U.S. government. The incident uncovered the “Fast and Furious” operation in which federal agents allowed dangerous criminals to purchase weapons. Although the plan was to track the weapons into Mexico, agents lost track of the majority of the firearms, so violent offenders were left to run wild with these guns.

Two of those weapons were located at the site of the firefight that killed Terry. According to Fox News, U.S. and Mexican authorities traced Osorio-Arellanes to a ranch near the border of Chihuahua and Sinaloa. His arrest came more than six years after the deadly December incident in the Arizona desert in 2010. Officials say a five-man rip-off crew was trying to rob marijuana smuggles when the group ran into federal agents on patrol. Terry was slain in the ensuing gunfire.

Six men have been arrested in the investigation and officials are still searching for Jesus Rosario Favela-Astorga, who faces charges of murder, robbery, conspiracy, assault and firearms. In addition to Osorio-Arellanes and Favela-Astorga, three other men were involved in the gunfight: Jesus Sanchez-Meza, Manuel Osorio-Arellanes and Ivan Soto-Barraza.

Soto-Barraza and Sanchez-Meza will spend the rest of their lives in prison, while Osorio-Arellanes is serving a 30-year sentence. Jaime Avila Jr. and Rosario Rafael Burboa-Alvarez are also serving sentences, and although they were not present when Terry was murdered, authorities say Avila bought the weapons and Burboa-Alvarez set up the rip-off crew. Avila was sentenced to 57 months while Burboa-Alvarez received 27 years.