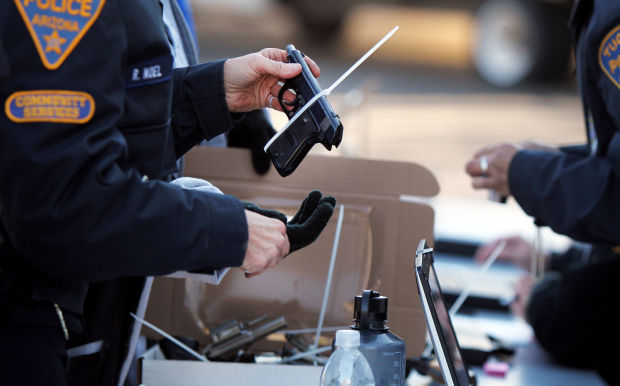 The City of Tucson has been working to get guns off its streets. On occasion, the Tucson Police Department will hold gun buybacks, and would often have a special way of disposing firearms it seizes as evidence in violent crimes.

A little more than 10 years ago, the city was looking for a way to get guns off the streets permanently, so it passed an ordinance requiring police to destroy seized guns.

The Arizona Supreme Court recently ruled that was in conflict with state law.

A lawsuit was filed by the state attorney general, Mark Brnovich, against the City of Tucson claimed that the gun-destruction ordinance was unconstitutional, and the Supreme Court agreed, basing it on a couple of laws that were passed before and after the Tucson ordinance was implemented.

The ordinance was passed by the City of Tucson in 2005, requiring police, once it had seized a firearm, to “destroy the firearm” as the primary means of disposal. In an extensively detailed ruling, Justice John Pelander wrote that chartered cities have no extraconstitutional authority except in matters “of local concern,” of which firearms was not.

Tucson attorneys argued that chartered cities such as Tucson have special authority to pass ordinances that are outside constitutional boundaries. However, the states’ highest court wrote that the state law on the books prior to the 2005 ordinance, which prohibited any city from passing an ordinance specifically addressing guns or ammunition, had supremacy.

To further clarify the point, the state legislature in 2013 passed a law requiring police to sell seized firearms back to licensed firearms dealers.

The city offered another legal argument to squash the lawsuit, claiming that the law that prompted the attorney general’s action was illegal in its own right. The law gave authority for a legislator to file a complaint with the AG’s office about the possible illegality of a local law or ordinance. There is no record who the legislator was who complained to the AG.

In the ruling, Justice Pelander wrote, “The legislature’s apparent objective in SB 1487 was not to usurp executive or judicial authority but rather to require and incentivize political subdivisions to comply with state law.”

There is no word whether the city will be held liable for any violations, but the city did incur legal costs from the case, which lasted a couple of years.