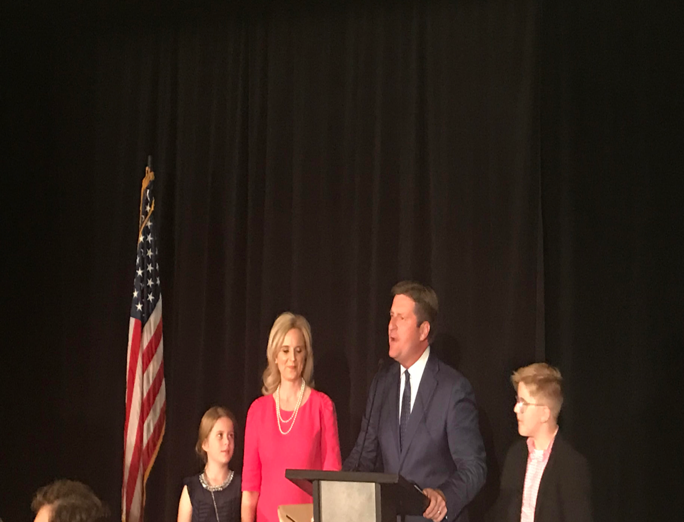 Former Phoenix mayor Greg Stanton is projected to end his congressional bid in a victory based off of early ballot results.

Stanton led the race by 19% against his opponent, Republican Steve Ferrara.

Stanton stepped down as the Mayor of Phoenix late May and announced his intention to run.

As mayor, Stanton worked on improving development in Downtown Phoenix and focused on various social issues such as homelessness, and women’s rights.

Recently, Stanton’s decisions in office were called into question when he was robbed outside of his favorite restaurant in early October.

Stanton was outside Thai Rama on Camelback Road and 15th avenue, when a man came up to him and asked for money.

He believed the man was homeless and was prepared to offer him money when he noticed the man had a hatchet.

He then gave the man his wallet and ran inside the restaurant to call the police.

When news of his robbery broke, the Phoenix Law Enforcement Association (PLEA) commented on Stanton’s decisions as mayor that left the reaction time and police presence in that areas lacking.

“It’s no secret the 73 Area of our Mountain View Precinct is one of the busiest in terms of calls for service.” PLEA said on Facebook, “However, response times are hampered its geographical footprint, brought on by a precinct boundary change and staffing shortage which are both coupled to and compounded by the City’s six year. How ironic that the man who helped run Phoenix into the ground by not advocating for sufficient police staffing is now a victim of that choice?”

Some voters outside ASU’s polling location agreed with the PLEA’s sentiments, thinking that Stanton’s choices in office made the robbery inevitable.

Sage Danner, 24, was waiting outside in the long line that trailed around many of the buildings on campus.

“He wasn’t very smart, he really just screwed himself over.” Danner said, “If he’s screwing that up than what is he screwing up that we don’t know about?”

Stanton stated to KTAR News in October that he had inherited many of the problems the PLEA discussed, including the six- year hiring freeze. He explained that he came up with an aggressive hiring plan before he resigned, often working to make room in the budget for more officers.

This incident did not cause his supporters to sway, many supporting him not for his work with the police department, but for his thoughts on social issues and healthcare.

Arizona State Director for the Feminist Majority, Carmen Linero Lopez says that her organization endorsed Stanton for his views on women’s rights and gender equality.

“Greg Stanton has a record of being pro- choice and pro- women. Not just about abortion rights, but about offering women positions in his administration.” Lopez said, “He is the obvious feminist choice.”

The Feminist Majority, an organization that works towards female equality, also endorsed Kyrsten Sinema and Ann Kirkpatrick, both pro-choice candidates.

One advantage Stanton had over his opponent was the fact that many voters liked the way Stanton lead the City of Phoenix while serving as mayor.

“I would vote for him if he ran for any other office.” Brad Bell, 24, said, “I kind of just went off of what he did as a mayor. I think he really went after and took a lot of insight from his constituents.”

Like Bell, Michelle Rose, 42, used Stanton’s record as mayor as the reason she voted for him.

“I really hope he wins,” Rose said, “I like his pro- LGBT record as mayor of Phoenix.  I understand he has been an advocate and a leader in fact to the whole country on getting legislation passed to protect the LGBT in our city”

Stanton ended his campaign with a speech to a Democratic viewing party at the Renaissance hotel.

“Voters sent a message, loud and clear, ‘we want political leader who will unite us. Not divide us.’ It is time to work together, because we are in this together.” He said.

“I am a proud Democrat,” Stanton said, “but make no mistake I would not be on this stage right now without the Independents who put their faith in me, or Republicans who crossed party lines to say that we deserve better than what we are getting in Washington now. I will work every day to be a representative for everyone.”