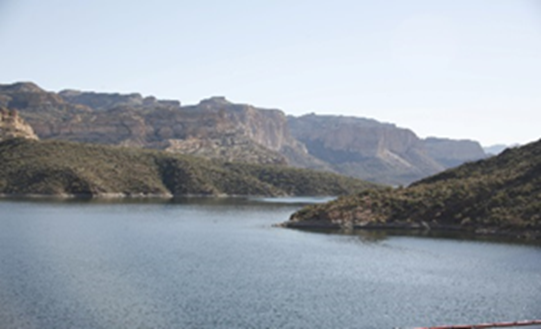 The 2016 winter runoff season, which over promised and under delivered, proved again that the Salt River Project water-storage system can handle just about anything.

SRP and central Arizona depend on wet winters and plentiful precipitation on the mountainous regions north and east of the Valley to replenish the reservoirs on the Salt and Verde rivers. El Nino 2016, which started out with such promise but faded into just another “first” in SRP’s 118 years of record-keeping annals, wound up producing  338,181 acre-feet – an unprecedented sixth consecutive year of below-median runoff into the two rivers.

SRP’s initial forecasts called for about 1 million acre-feet of runoff to flow into the system over the winter and spring. After the poor winter, the reservoir system today stands at almost the exact position as it was one year ago. The total Salt and Verde system is currently at about 50 percent of capacity, nearly the same on this date in 2015. Theodore Roosevelt Lake, which holds about two-thirds of the water SRP stores for use by Valley shareholders, stands at about 40 percent full – also about the same as 12 months ago. The two reservoirs on the Verde River are at a combined 42 percent of capacity, down from 52 percent a year ago.

“The good news is that we understand that we live in a desert, and we plan accordingly,” said Charlie Ester, SRP’s manager of Surface Water Resources.  “That means we plan for dry winters even when the conventional wisdom would suggest otherwise, like last winter.  I would much rather be surprised with water in storage I wasn’t planning for than to have the reservoirs be lower than expected.

“The better news is that we are still in good shape after six consecutive years of below-median runoff and more than 20 years of drought in central Arizona.”

Ester credited improved water conservation and significantly reduced water demand as the two primary reasons why SRP’s system remains strong despite another January-to-May runoff period that fell far short of the optimistic early predictions as well as the 30-year median runoff of 534,336 acre-feet.

This year’s runoff total still finished above the 2015 runoff total of about 327,840 acre-feet, which was about twice the runoff of the 2014 season of 148,038 acre-feet – the eighth-driest since SRP has been keeping water-gathering records.

Ester said tree-ring studies by the University of Arizona’s Laboratory of Tree Ring Research, which compared data from the Salt and Verde and the Colorado River watersheds over the last 1,200 to 1,500 years, have shown that drought periods of 20 and 30 years are common in central Arizona – as are wet “spike” years in the middle of long stretches of drought in which runoff can fill the reservoirs, such as 2010.

To help keep as much surface water as possible in the reservoirs – which have remained at about the same level for the last five years — SRP relies upon pumping from underground wells to supplement its surface water supplies.

“We are right in the middle of our peak water-demand time of the year, and our system is doing exactly what it is designed to do – store water during wet years for these kinds of dry periods,” he said.