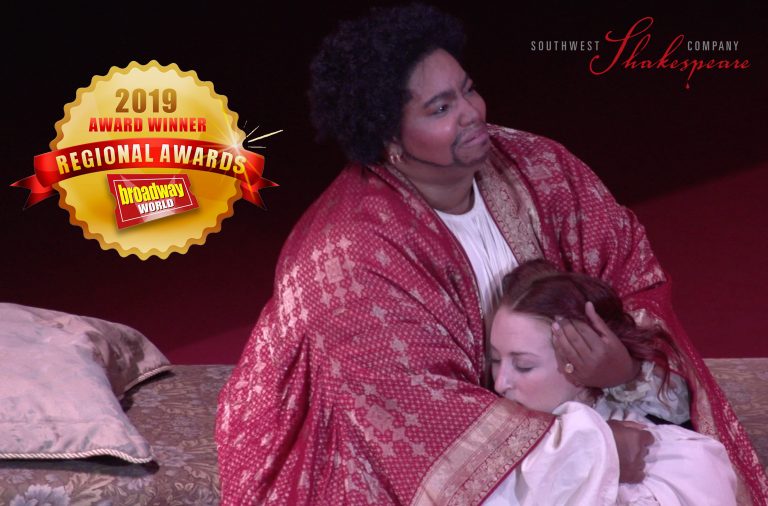 Founded in 2003, BroadwayWorld is the largest online theatre site, devoted to all things Broadway as well as theater around the world. This year, the BroadwayWorld Regional Awards included over 100 cities across America, Canada, Central and South America, Europe and Asia, honoring productions which opened between October 1, 2018, through September 30, 2019.

“We are extremely honored and grateful. Thank you Arizona for voting for Southwest Shakespeare Co. – time and time again! You have supported our commitment to broaden our scope and accessibility,” said Mary Way, executive director of the Southwest Shakespeare Company. “We sincerely strive to deliver the highest level of entertainment possible and it’s pretty darn exciting that contemporary audiences are inspired by the stories that have shaped us – not to mention some fireworks.”

Over the past 26 years, the Southwest Shakespeare Company has opened its doors to exploring the intricacies of language through the vibrant and passionate performance of works of classical theatre. The nonprofit’s vision to be the premier classical theatre company in the Southwest, building a cultural awareness of the classics that impacts the life of every person and reaching every student in Arizona, as they are the only mainstage and touring theater performing curriculum-based programming for the students of Arizona. They are currently serving 25,000 students annually.

“If you haven’t had a look —come! We have a fantastic artistic team and a wide variety of events and shows from all eras and for all generations. We couldn’t be more excited to give audiences a warm welcome and a great experience,” added Way.

In addition, the Southwest Shakespeare Company’s Spring Rep will include:

Founded in 1993, the Southwest Shakespeare Company has been the standard-bearer for classical theatre in Arizona. Founded on a mission to educate, elevate, entertain and inspire the communities of the Southwest, SSC has transformed itself from a small, inspired company of local artist/educators into a theatrical institution of the American Southwest. In its quarter-century SSC has expanded the classical audience in the Phoenix area beyond its home in Mesa to the communities and venues of Scottsdale, Tempe, Phoenix, Peoria and more. In recent years SSC has even brought the larger world of the theatre to Arizona, hosting and presenting classical, literary-themed productions from across the country and around the world; from the Harlem Shakespeare Festival to the Fringe Festivals of Los Angeles and London, England. SSC is now, and always has been, a company guided by the theatrical vision of William Shakespeare: utilizing simple theatricality to cultivate audience imagination and participation in the fundamental human act of storytelling. These original principles are the reason for SSC’s formation, the blueprint for its future, and the story of its history. For more information: https://swshakespeare.org.