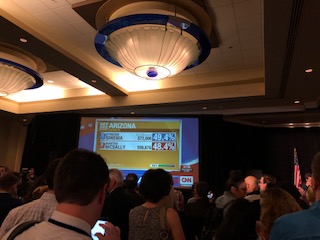 The two women were in a tight race to fill Jeff Flake’s senate seat for the next six years.

In Arizona’s 106-year history there’s been 12 seats for the senate, all filled by men. Sinema makes history as the first woman U.S senator of Arizona.

Arizonas political climate is going to change as this is the first time a democrat has filled the Arizona Senate seat since 1995.

At the Election Night Party at the Renaissance Hotel hosted by the Maricopa County Democratic Party voters seemed hopeful about the results.

All the way from Palo Alto California, Crystal Casey, 62 attended the Election Night Party. She donated to the Sinema campaign because she wanted to support the Arizona Democratic party as she is an Arizona Native.

The attendees cheered and yelled when they found out democrats won over the House. “We thank you the public for coming out tonight, give yourselves a round of applause. You the people have the power if you use it.”  Said Jevin Hodge Vice Chairman of Arizona’s Democratic Party. “We still have votes coming in but we have something to celebrate right here, right now and that is a democratic controlled House of Representatives,”

McSally has represented Arizona’s congressional district two since 2014. McSally was a Colonel in the United States Air Force and has a 26-year military career.

Sinema has represented Arizona’s congressional district nine since 2012. Sinema is an Arizona State University graduate and taught at the Arizona State School of Social Work. She started as a green party member before joining the democratic party.

McSally’s campaign continually slammed Sinema for her anti-war protests during the Iraq War and for being too much of a leftist for Arizona.

“I’m here for Kyrsten, I’m worried about healthcare it’s always going to be about healthcare as I am a diabetic. Of course, I am worried about preexisting conditions. I’m hoping Sinema will go to congress and be a female John McCain,” Michael Turner who’s an Independent said at the Election Night Party held by Arizona’s Democrats.

The McSally campaign made T.V ads attacking Sinema for protesting the Iraq war wearing a pink tutu during the 911attacks. In the ad McSally accused her of “denigrated” troops.

“Martha McSally is the best candidate out of the two she’s a retired military officer, she served in the United States Air Force and rose to the rank of colonel.  She was one of the first American women to fly in combat which is so extraordinary to me.” Carlos Cazares man in Avondale said.

In the only face to face debate on Oct. 15, Sinema accused McSally of making her entire campaign about a comment Sinema made about the Taliban in 2003.

McSally asked Sinema for an apology during the debate because of the comments she said.

“McSally never proved to me that she could give us a better Arizona. All she did was throw mud. The whole time I’ve been listening to her mud. I got mud in my ears from her, “Turner said.

Sinema and McSally were torn on issues like immigration, climate change, and health care. They both agreed with President Trump sending troops at the border US-Mexico border.

“Frankly I am presently philosophically unable to support any Democrat. I would have voted for McSally under any circumstance,” Robert Turner CEO of American Tissue Services Foundation said.

President Donald Trump endorsed Martha McSally and in a tweet on August 29 called her an “extraordinary woman.”

According to the New York Times strategists say the visit from Trump in October hurt McSallys campaign because she lost support from independent voters and moderate republicans.