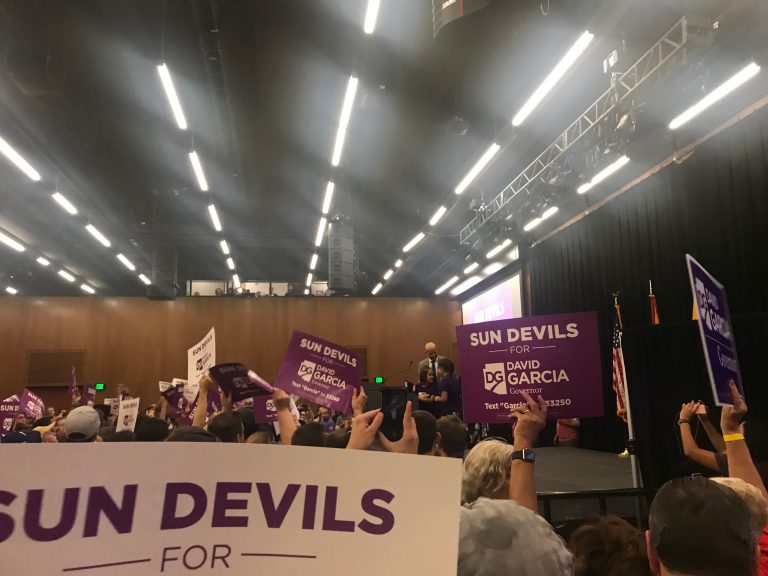 The sea of people in blue “Feel the Bern” T-shirts and holding purple “Sun devils for Garcia” signs cheered as gubernatorial candidate David Garcia talked about his vision for Arizona education.

Sen. Bernie Sanders and five other speakers took to the stage to support Garcia during his rally in Tempe on Tuesday night. A common theme throughout the speeches was Garcia’s stances on education, healthcare and immigration.

“Teachers, tell your friends that when I win I’m going to treat you like professionals, folks,” Garcia said in his speech. “Under Doug Ducey, 75,000 teachers had to march to his front door for him to listen and that’s not going to happen when I am governor.”

Garcia is running against incumbent Gov. Doug Ducey in the election taking place on Nov. 6.

The rally, which was sponsored by ASU Young Democrats, took place on the ASU Tempe campus. Sgt. Jennifer Bryner of the ASU police department said that the room had a cap of 1,100 bodies and people had to be turned away due to a full capacity.

There were a few protestors who lined up outside the building, but there were none inside during the speech.

The audience went back and forth between cheering “Gar-c-ia” and booing when President Donald Trump and Ducey were mentioned.

Sanders strongly criticized Trump for the majority of his speech. He listed moments in which he said the president had lied regarding healthcare.

“Trump told the people of Arizona that if he was elected he would not cut Medicare, Medicaid or social security,” Sanders said. “He lied again.”

Toward the end of his speech Sanders addressed the upcoming election and why he is backing Garcia.

“This election in two weeks is enormously important for so many reasons. It’s important that we will tell the world that we do not accept Trump’s demagoguery and his prejudices and his economic policies. It is important that we tell the world and our own people that we want a government for all of us and not just the few,” Sanders said. “In two weeks, you, in Arizona, can help make American history. Give us a strong progressive governor here. Please elect David Garcia.”

Sanders and Garcia also spoke at a rally at The University of Arizona in Tucson earlier in the day. The messages were the same, but the crowds were different.

One member of the crowd for the Tuesday night rally was Jacob Gryskiewcz, who wore a “Socialism sucks” T-shirt and a red “Make America Great Again” hat. He said he attended the rally, because he wanted to hear the Democratic message.

“People want to focus on what Republicans don’t like, but then the Democrats are the same way, too,” said Gryskiewcz. “It was nice to hear what Democratic leaders wanted to say and what the key issues were.”

Another member of the crowd was former Senate candidate Deedra Abboud, who said that Sanders supporting Garcia at the rally was significant.

“David Garcia has not only gotten the endorsement from Bernie Sanders, but Hillary Clinton and Barack Obama. So, as Democrats that should be a unifying factor and it should be so exciting,” Abboud said. “That’s one of the things that we’ve kind of had since 2016 — this division of the Bernie Hillary thing. David Garcia has actually managed to bring everyone on board.”