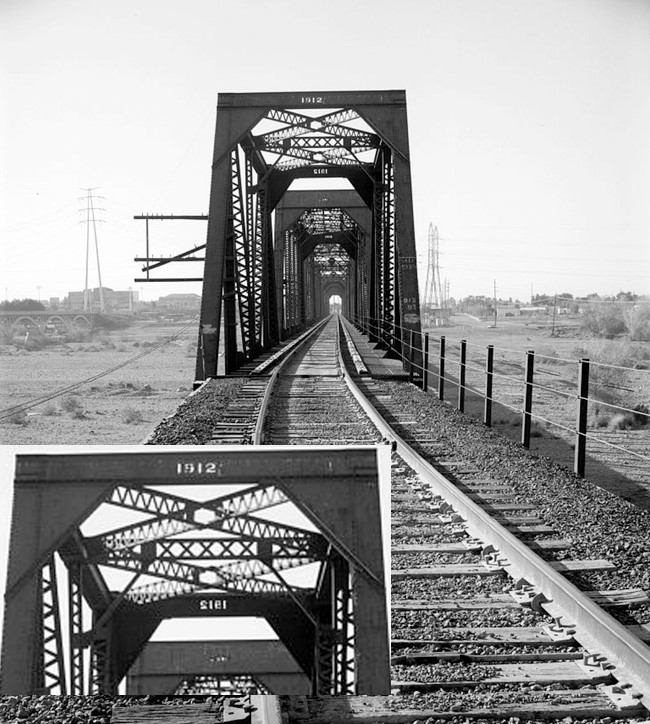 Originally published August 31, 2012 – During this Arizona Centennial year many are looking to commemorate anything that reaches 100 years in 2012. That got me thinking about what in Tempe is exactly a century old? It turns out there is an often overlooked landmark definitely worth recognizing.

If you have ever been to Town Lake, you’ve seen it. It’s hard not to notice. Just in case there is any doubt about its age, 1912 is prominently displayed numerous times. Not only is it a centenarian, but it is also the oldest span over the Salt River. And it’s located right here in Tempe. Figure it out yet?

Well, it’s the Southern Pacific Railroad Bridge that has been reliably carrying trains across the river, and later Town Lake, for 100 years. Given the size of our region today, it is difficult to understand that the elaborate network of rail lines threading through the Valley have never been part of the main line.

Even before the Southern Pacific Railroad was completed across southern Arizona from California to Tucson in 1880, efforts were underway connect Maricopa, the nearest point, to the Salt River Valley.

If the Valley was to grow successfully, it needed a direct rail connection – not the 30 miles or so of dusty roads that carried stagecoaches, and wagons hauling livestock and agricultural crops.

After years of debate about an alignment, Charles Trumbull Hayden’s handpicked Representative to the infamous “Thieving Thirteenth” Territorial Legislature, John S. Armstrong managed to include in a railroad bill the line would cross the Salt River “…at or near Tempe.”

The Maricopa & Phoenix Railroad official reached Tempe in mid-June 1887. Track over the river and into Phoenix was completed and celebrated on July 4. All went well until February 22, 1890 when after two days of rain, an untamed Salt River washed out 200 feet of trestle.

Just a year after repairs were made an even more powerful flood sent the three 150-foot spans of the bridge careering down the river. While an improved crossing was being built, traffic was carried over a temporary bridge just four feet above the water. Weather would continue to cause trouble for the M&P – flooding and washouts occurring with some regularity.

In 1902 a span collapsed plunging an engine and a couple cars to the river bottom below. Record flooding plagued the crossing again twice in 1905. A new alignment was constructed to safely facilitate movement of trains.

The last improvement came in 1912 when a “nine through-truss bridge” was ordered from the American Bridge Company. The new span covering 1,292 feet opened in 1913, two years after the completion of Roosevelt Dam.

With the threat of wild floods abated, a quarter century after rail reached the Valley via Tempe, engineers finally got it right – solid piers constructed in 1905 and a steel bridge still carrying trains a century later.