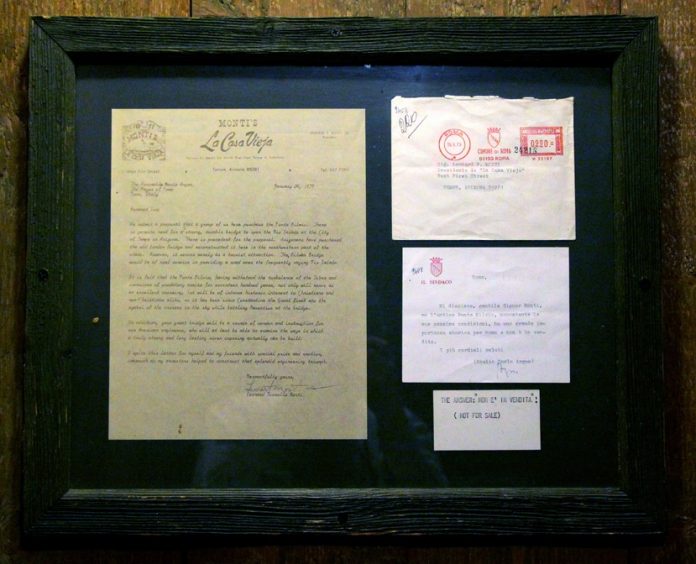 Originally published July 2, 1010 – Last week we were left wondering about an intriguing letter sent from Tempe to the Mayor of Rome in 1979 offering to buy the Ponte Milvio – a Roman landmark dating to 115 B.C.

Like Lake Havasu’s London Bridge, the proposal was to dismantle, move and reconstruct the Ponte Milvio over the Salt River at Tempe.

Monti had been a bigger-than-life figure in downtown ever since he acquired La Casa Vieja – Charles Trumble Hayden’s first home – in 1954. His legacy restaurant remains today a landmark at Rio Salado and Mill.

Since 1997 when Leonard died, Michael Monti, has been carrying on his father’s tradition. The younger Monti filled in many blanks.

According to Michael, Leonard often fortified by his pals and some glasses of good Italian Red was prone to dreaming up unrestrained antics. Michael says asking to buy the span was characteristic of his dad.

Leonard “…always made a point of visiting that bridge when in Rome,” Michael states. “The Milvian Bridge is where Constantine the great, on the eve of the battle against Maxentius that changed the destiny of the Empire, had a vision of three crosses in the sky and a voice saying “In Hoc Signo Vincit” (In this sign you shall conquer). Constantine attributed his victory, and conversion to Christianity, to this vision.

“The grand sweep of history–and grandiosity–were both in my dad’s blood,” Michael continues. “I don’t think he even remotely believed it was for sale, but he was inspired by the story of the London Bridge at Lake Havasu to float a trial balloon.”

Supporting that theory Michael notes “…that my father, in closing the original letter, deviated from his typical signature of “Leonard F. Monti, Sr.” and instead used his full name, Leonard FIORELLO Monti to underscore his Italian heritage.”

Michael adds that although Leonard “could have written the original letter…in Italian, he clearly wanted to make it available for public appreciation here in Arizona.  I am sure he particularly savored both the opportunity to show that off and, at the same time, use this stunt to express his exasperation at the constant traffic jams resulting from incompetent bridge-building going on here.”

Nearly 11 months later Leonard had a response. Written in Italian, was this terse reply from the Mayor (graciously translated by Michael Monti):

“I am sorry, my dear Mr. Monti, but the ancient Milvian Bridge, despite the terrible condition it is in, is of great historical importance to Rome and is not for sale.

Now you know the whole story. And as many of you gather at Town Lake on July 4th, contemplate how the Ponte Milvio might have looked standing proudly over the Rio Salado – lit up by the fireworks spectacular. If only Leonard Monti’s dream had come true.