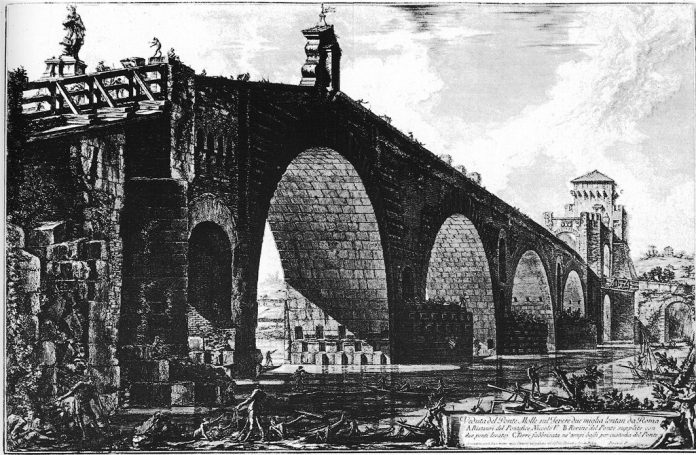 Originally published June 25, 2010 – The letter dated January 26, 1979 is addressed to The Honorable Mario Argan, the Mayor of Rome.

“We submit a proposal that a group of us here purchase the Ponte Milvio. There is genuine need for a strong, durable bridge to span the Rio Salado at the City of Tempe in Arizona.”

One of Rome’s oldest bridges over the Salt River?  What’s that all about?

“There is precedent for the proposal,” the letter continues. “Arizonans have purchased the Old London Bridge and reconstructed it here in the northwestern part of the state. However, it serves merely as a tourist attraction. The Milvian Bridge would be of real service in providing a road over the frequently raging Rio Salado.”

Bringing a nearly eight-century-old bridge to the Arizona desert undoubtedly served as inspiration for the letter – which goes on:

“It is felt that the Ponte Milvio, having withstood the turbulence of the Tiber and invasions of predatory armies for seventeen hundred years, not only will serve as an excellent crossing, but will be of intense historic interest to Christians and non-Christians alike, as it has been since Constantine the Great first saw the symbol of the crosses in the sky while battling Maxentius at the bridge.”

“In addition, your great bridge will be a source of wonder and instruction for our American engineers, who will at last be able to examine the ways in which a truly strong and long lasting river crossing actually can be built.”

Why such a strong disdain for American bridge builders?

Well, just five years earlier in December 1965 and January 1966 nearly every span across the Salt River was either washed out or damaged by the greatest floods since the completion of Roosevelt Dam in 1911. In Tempe floodwaters encircled Sun Devil Stadium.

That would certainly explain the desire for a really strong, time-tested viaduct crossing the Salt at Tempe.

“I write this letter for myself and my friends with special pride and emotion, inasmuch as my ancestors helped to construct that splendid engineering triumph.”

The referrals to the letter being written “for myself and my friends” and “ancestors” offer more tantalizing clues why it was authored in the first place.

Someone who has intimate knowledge of the letter writer has postulated that it was most likely penned as the result of a group of cronies getting together. Emboldened by Lake Havasu’s good fortune and fortified by a bottle or two of a good Italian red wine they contrived to secure an ancient bridge for Tempe.

So enough already. Who wrote the letter? Did the Mayor of Rome ever reply? Stay tuned. All will be revealed next week.