Home Uncategorized ROCK IT UP at Tempe Marketplace 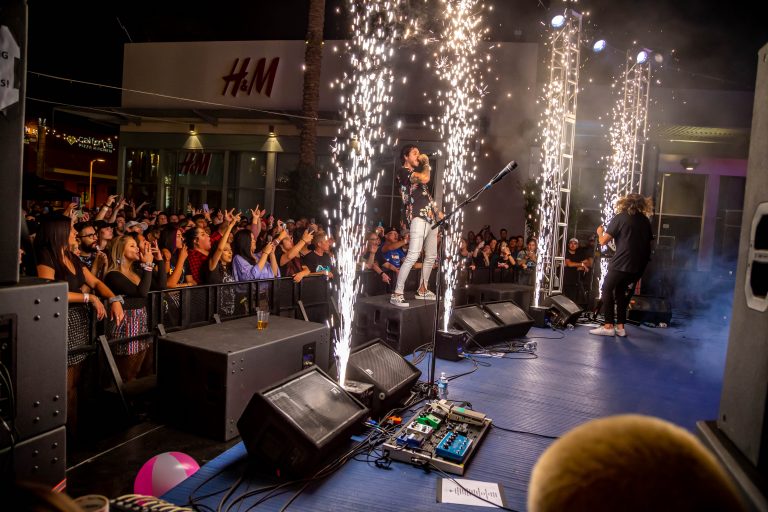 As the weather cools down, Tempe Marketplace, Dave & Buster’s and ALT AZ are heating things up with the ROCK IT UP concert series, featuring four free, full-length concerts from some of rock’s hottest national acts, including Mod Sun on October 6, Tessa Violet + Twin XL on October 30, iDKHOW on November 2 and Grabbitz on November 3. All four evening shows will feature an outdoor bar from Dave & Buster’s while guests rock out at The District Stage.

WHAT:           A FREE concert series at Tempe Marketplace in partnership with ALT AZ and Dave & Buster’s, featuring four nights of full-length performances from Mod Sun, Tessa Violet + Twin XL, iDKHOW and Grabbitz. An outdoor bar will be provided by Dave & Buster’s.

Standing for “Movement on Dreams Stand Under None,” Mod Sun, otherwise known as Derek Ryan Smith, began his music career at an early age. Mod Sun has released five mixtapes and three EPs throughout his solo career. Mod Sun’s style has been described as hippy hop adding an electric spin to hip-hop. Albums “Look Up,” “Movie” and “BB” have all made their debut on Billboard Top Heatseeker’s chart. His most recent album, “Internet Killed the Rockstar” was released earlier this year just in time to take the stage at Tempe Marketplace.

Tessa Violet wears many hats as an American singer-songwriter, video director, blogger, entrepreneur and actress. Kicking off her successful career on YouTube, Violet has now embraced the Indie-Pop scene. Tessa Violet is personable and connects with fans at every show and Tempe Marketplace’s upcoming concert is no exception. Join Tessa Violet in showcasing her recent album, “Bad Ideas” and newest singles “Role Model” and “Words Ain’t Enough.”

Los Angeles trio Twin XL is the creative crew of songwriters and producers. Twin XL is made up of Cameron Walker-Wright and Gomez brothers Stephen and John. Collectively, the three have written and produced for artists such as All Time Low, Lindsey Stirling, Life of Dillon, and have had their music featured in commercials and trailers such as Disney’s “Christopher Robin” and ABC’s “Lucifer.” This trio’s synergy is a perfect storm of glistening retro tunes, catchy bass lines and memorable melodies. Don’t miss Twin XL hit The District Stage when they open for Tessa Violet.

Short for “I Don’t Know How but They Found Me,” iDKHOW is a rockin’ musical duo based in Salt Lake City, Utah. Vocalist and bassist Dallon Weekes and drummer Ryan Seaman, merged in 2016 to create a blend of indie pop and electronic rock band. iDKHOW’s latest album, “Razzmatazz,” was released October 2020. The duo made their national television debut on Jimmy Kimmel Live! where they performed the single “Leave Me Alone” followed by a performance on The Ellen DeGeneres Show in February 2020.

Praised by the likes of Rolling Stone and Billboard, while notching over 80 million streams to date, Grabbitz (Nick Chiari) has allotted critical praise and adoration from a wide audience. He’s shown his voice and music have evolved in real time from his beginnings in dance music, to a more alternative, genre-less hybrid. Grabbitz has collaborated with heavy hitters like One Republic, deadmau5, Pendulum, NGHTMRE and now REZZ (with chart juggernaut “Someone Else”).

With cutting lyrics soaked in double entendre, “Someone Else” has an insanely infectious sound signature that weaves in and out of its verse, chorus, bridge structure with no-frills guitar chords and grinding industrial electronica. The crack-the-volume nod to Nine Inch Nails peaked at No. 15 on the Billboard Alternative songs chart, #1 in Canada, and hit No. 23 on Billboard’s Hot Dance/Electronic Songs chart. Grabbitz is primed to have an unmistakable voice in the music world and beyond.

WHERE:         Tempe Marketplace at The District Stage

Capacity is limited and will be handled on a first come, first serve basis.

Tempe Marketplace is committed to meeting and exceeding the hygiene standards established by the CDC and World Health Organization. Increased cleaning, sanitizing, and disinfecting occurs through the day, and throughout common areas of the property with a particular focus on highly trafficked locations. Hand sanitization stations are located throughout the center, masks are recommended for guests regardless of vaccination status and all staff are required to wear masks for the duration of the event.

Second to none, Tempe Marketplace is the ultimate interactive shopping, dining and entertainment experience in greater Phoenix. Situated in a vibrant, high-energy outdoor environment, it’s a shopper’s paradise, a diner’s dream and a resident’s cultural hub. True to its marketplace name, there’s something for everyone as more than 100 retailers and restaurants call the 1.3 million-square-foot retail destination home. The center’s dramatic lights and eye-catching laser elements give it a modern and energetic feel, yet the gathering spaces and entertainment areas make it a warm community hub. Located in the heart of the Valley at the Loop 101 and 202 crossroads, Tempe Marketplace is minutes from Phoenix, Scottsdale, Mesa, Chandler and Gilbert. For more information, visit tempemarketplace.com.