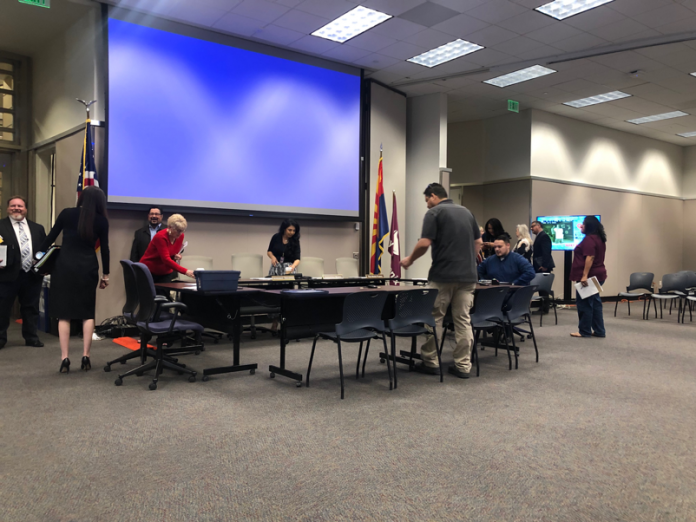 Phoenix City’s subcommittee on Public Safety and Veterans met on Wednesday to discuss the neighborhood block watch program and a bid for intersection cameras.

The subcommittee is looking to expand the number of intersection stoplight cameras that are in use throughout the city of Phoenix. There is currently a total of 12 cameras in the valley. Phoenix City Police Lieutenant Patrick Hofmann is in support of the addition of more stoplight cameras, believing that they will assist in reducing the number of red lights that are ran.

“Under the scope of work, the current structure is that the vendor is responsible for all infrastructure, equipment, software installation,” said Hofmann. “So, the cost to the city is zero and I would recommend that we certainly expand that and support that motion.”

Councilmember Michael Nowakowski attended the subcommittee’s meeting, giving his input on the motion to add more cameras to stoplights throughout Phoenix.

“You can work with the streets department and find out where the most high accident intersections in our city of Phoenix are,” said Nowakowski. “And if it’s just the 12 areas we have cameras for or if we should expand that.”

Thelda Williams, another member of the Phoenix City Council also attended the meeting. Williams is a supporter of stoplight cameras and think that the city should be adding more.

“I think it’s absolutely essential to have cameras because the city has grown and now there are other areas that need these cameras,” said Williams. “I think we can find intersections where this problem can be evaluated for cameras. And I believe the argument right now calls for 13, so we need to change that to add more.”

The motion was then voted on and approved by the committee, with all members voting yes.

The city of Phoenix implemented a Neighborhood Block Watch Grant Program, the program is now asking for an increase in the allocation of funds to be able and provide an adequate amount of money for their current block watch programs.

Carmen Arias of the Neighborhood Block Watch Grant Program spoke in front of the subcommittee to ask for this increase of funds.

“What’s happened this year is that we have a restriction on the amount of funding that we can allocate,” said Arias. “We would like to request that that number be increased to $1.5 million on a permanent basis.”

The previous approved funding for the Neighborhood Block Watch Grant Program was $1.4 million per fiscal year. All members voted yes, and the funding was approved, now set at $1.5 million permanently.