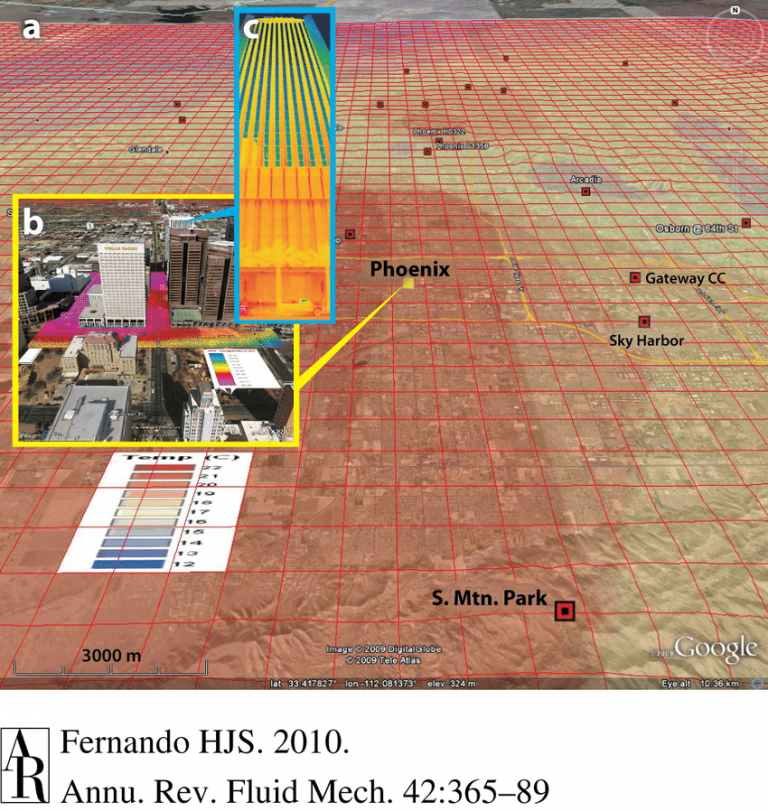 “We share the perspective that our city and region can and should be leading the global conversation about coping with heat, or perhaps even thriving in the heat,” said David Hondula, at a City of Phoenix Subcommittee meeting on Tuesday morning.

Hondula is an assistant professor for the School of Geographical Sciences and Urban Planning at Arizona State University, and has a Ph.D. in environmental studies. He was one of the three experts behind one of Phoenix’s newest endeavors in hopes of addressing one of the city’s most pressing issues— urban heat.

When the environment of an area changes to make way for urban regions, it creates something called an urban heat island (UHI). This then leads to temperatures anywhere from 10-15 degrees higher than surrounding rural areas.

“In June, Michael R. Bloomberg announced that he would be distributing $200 million to cities to address the most pressing challenges those cities are dealing with,” Hammett said. “Phoenix was one of the first cities to respond.”

The region’s rapid expansion has led to impactful climate changes that have become more and more evident as years pass. This phenomenon of urban heat, however, is not a new one, and is not one exclusive to Phoenix.

“Phoenix is actually the epicenter of heat research, and we were kind of unique in wanting to look at this particular issue,” Hartman said. “It is something that many cities are struggling with, yet none are actually looking at this problem, so we came up with the concept of a ‘heat-ready city’.”

By showing their interest in this program, the City of Phoenix and various community members and organizations were able to meet with experts at an accelerated workshop in hopes of advancing their idea for this challenge, prior to sending in the official application on October 20.

“Members from city staff as well as community organizations came together, and we began looking at our most pressing issue, which was urban heat,” Hammett said. “They didn’t want us to focus on solutions, but they wanted us to really look at the problem and what the causes of that problem would be.”

26,000 cities globally have passed certifications and evaluations to be considered a ‘storm-ready city’, but Hondula and his team of researchers at ASU came up with the concept of a ‘heat-ready city’ and hope to advance these efforts with the support of Bloomberg Philanthropies.

“Cities would go through a formal, self-evaluation process where they demonstrate effort and success in a number of different thematic areas,” Hondula said. “Not only mitigating heat, but other important areas like education and collaboration.”

The City of Phoenix already has many programs geared towards heat mitigation and the advocacy for those most vulnerable populations affected by the gruesome Arizona temperatures. Upon advancing in the Bloomberg Philosophies’ Mayor’s Challenge, the City of Phoenix would gain the resources and support to further those initiatives by looking beyond just the triple digits.

“It’s not about the temperature, but the building materials and how much heat they’re absorbing,” said Hartman. “It’s the amount of shade we have, and how much heat is produced from cars driving on our freeways. We want to look at how to mitigate that so we can really cool off in the evenings.”

Bloomberg Philanthropies will evaluate the applications from numerous cities in the U.S. on the grounds of their vision, impact, implementation and transferability.

After the approval at this subcommittee meeting, the City of Phoenix will move forward with the submission of the application. In January of 2018, Bloomberg Philanthropies will then select 35 cities to pilot their program, providing a $100,000 grant and technical support. After that, four cities will receive $1 million and the grand prize winner will be awarded $5 million to bring their idea to life.