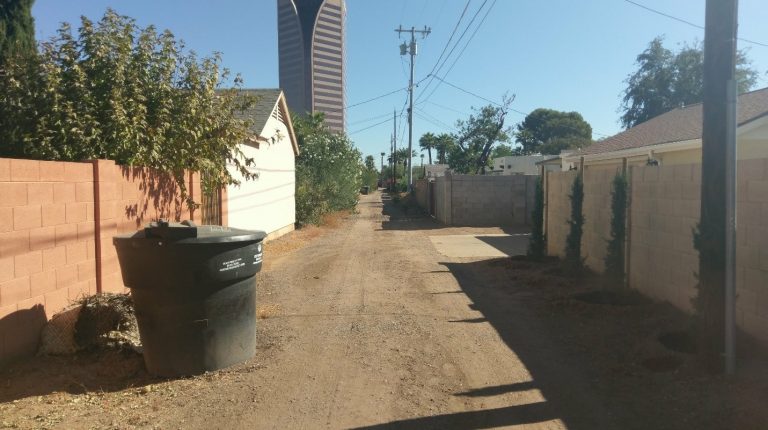 Increases in illegal use of alleys, to avoid traffic and maneuver streets by citizens, has led to a police campaign of enforcement and education.

Officer Benjamin Harris of the Mountain View precinct polices traffic around the residential area within Third Avenue and West Holly Street. Over the past few weeks, Harris noticed an increased use of alleys behind residential homes, by various vehicles, to cut through traffic and move around streets more easily.

Harris took it upon himself to begin a traffic enforcement and education campaign to curb the illegal use of these side roads by people in this area and Phoenix at large.

Upon review, Harris noticed that many of those who were contacted did not know thoroughfare law and thought alleys were permissible to use in these areas.

“Our alleys are easements for property owners to access their property/parking space, emergency vehicles such as Police/Fire Dept vehicles, and maintenance for Utilities such as telecom/ power/ gas…an alley..is…private property,” Harris said on nextdoor.com.

As a community action officer for the Phoenix police, Harris decided to post his findings on nextdoor.com, a social network app meant to connect neighborhoods and communities.

Harris plans to use social media and his traffic efforts to reduce these illegal actions.

“I will continue to conduct traffic enforcement for these and other issues I find. Please be kind to others, and respectful of other people’s property,” Harris said on nextdoor.com.

An action which the Phoenix police fully support.

“Through educational and enforcement contacts, Phoenix Police hope to redirect motorists away from the alleys and encourage them to use the city streets,” said Sergeant Jonathan Howard, spokesperson for Phoenix police.

Residents of the neighborhood have various responses to the city code and the police effort.

Local tenant Murray Carbonneau says that the use of the alleys, which are considered property of the house owners, can be rampant and is a nuisance to the community.

“Having the open alleys, it’s a nuisance, we get a lot of traffic, particularly rush hour time in the mornings and late afternoon, with people going down the alley fairly quick kicking up a lot of dust and that kind of thing,” Carbonneau said in front of his home.

Other residents agreed that when vehicles come down these alleys they are driving fast spreading dirt into the air and sending it into some yards.

However, not all residents agree with the effort to crack down on alley traffic.

Tony Vasquez, who lives in the neighborhood, is a third generation Arizonian who says his family has been in Phoenix since the early 1900s.

Vasquez holds special ties to the beginnings of the city as he remembers a downtown Phoenix empty of the skyscrapers and stadiums that now occupy it. He even has pictures of Phoenix before most of the streets and neighborhoods were established.

As a Mexican-American, Vasquez sees privilege coloring local opinions about these alleys. He also disagrees with prior city actions around streets.

“I don’t think [anyone] has the right to dictate to people where they can go through or not go through,” Vasquez said. “The streets [before] were thoroughfares, you could go in and out… it doesn’t mean that just because they live in this area, it gives them the right to cut off [alleys and streets].”

As someone who has lived all over Phoenix, Vasquez says it is the specific type of people in this area, ones from out of the state or who are less marginalized, that are bothered by this traffic behavior.

Alleys have been the focus of several debates and actions within Phoenix in the last year.

Azcentral.com reported on the Royal Palms neighborhood that requested the city of Phoenix gate off their alleys as they feared the crimes and disturbances that were committed in them. This lead to City Council approving a pilot program for the community and others like it.

A month ago, City Council also voted to abandon the historic Barrister Alley. A decision some urban activists did not agree with.

As talk of Phoenix alleys continue, it is unclear, in the long run, whether rampant illegal traffic occurring in and around areas like Third Avenue and Holly Street will move Phoenix to make these types of decisions citywide.