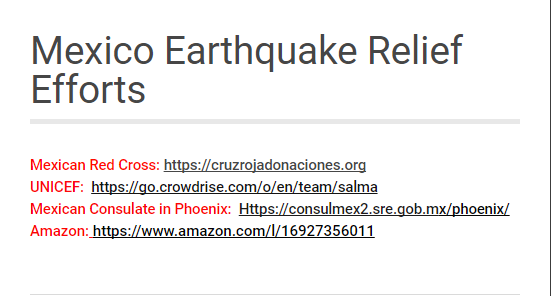 Phoenix and Mexico trade officials are collaborating on relief efforts, after a magnitude 7.1 earthquake shook Mexico City on September 19.

“The earthquake resulted in a loss of life and loss of homes, thousands of people are without homes right now and many can’t return to their homes because they are being evaluated for structural damages,” according to Margie Emmermann, Mexico trade representative for the City of Phoenix.

“We’re steering people to efforts that we know are going to be utilizing the resources in an appropriate way,” Emmermann said, their office has been working with the Mexican Consulate to let people know different ways that they can donate and help.

The Mexican government is really stressing that donations be spent in appropriate ways because Mexico cannot handle a lot of the storage of goods that have been sent to the country, said Emmermann.

Salma Hayek, who lived through Mexico’s 1985 earthquake that killed over 10,000 people, started a fundraising campaign for the United Nations Children’s Fund on the website, Crowdrise. Hayek, a Mexican- American actress, posted a video asking for people to donate to UNICEF, “to help the families that are going through this nightmare.” The campaign has raised over $700,000 in 15 days.

The City of Phoenix Mexico Trade Office was spared by the earthquake and suffered only cosmetic damage and things are returning to normal in their office. But, Mexico City and the surrounding regions are still in the rebuilding process, according to Ahlers.

Ahlers was told by Mexican government officials that fundraising donations would be most effective because of the shipping distance from Phoenix to Mexico City.

“As far as business interruption, there were a few days that the airport was closed. There was some major damage to the road… Not a whole lot could be done businesswise and we were just focused on the relief effort,” Ahlers said.

Natalia Perez, director of the Arizona Trade and Investment Office in Mexico City said, “Each one of the people on our team in our office went to help in different aid centers.” Perez said, there has been a workshop to help relieve the stress from the disaster, people were scared of going back to the office because of what would be there.

With the very close relationship with Mexico and Arizona, many people were concerned and following up on what was going on Mexico, Perez said, their building did not suffer any damage and they are now educating people inside the office on the construction of the building.

“It has been a difficult process because it was really a very bad moment,” said Perez.

For the people who lost their homes or lost someone close to them, there will more help needed later, said Perez, “You have to help them to find somewhere to stay where they can recover their home and then you have to support them to continue their lives inside. So that is what we are doing at this moment.”

There are many associations that gather materials for construction, furniture, clothing or home supplies to help these people recover, Perez said, but the better focus is reconstructing the lives of those who lost everything. She said after the initial emergency, people get back to normal and they don’t follow up as much with these people affected.

“We have been amazed and in awe of how the people of Mexico have all come together, they’re very resilient people,” Emmermann said.