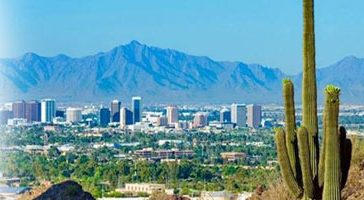 The Federal Bureau of Investigation released Preliminary Semiannual Crime Statistics that showed an increase in violent crimes between 2015 and the first half of 2016 in several major cities.

The largest increases for Arizona cities were in Chandler and Phoenix, while cities like Gilbert, Tempe and Mesa saw decreases, according to an article written in earlier September by AZ Central.

Sgt. Daniel Mejia, Public Information Officer for the Chandler Police Department, shared the information collected by the precinct on violent crimes dating from 2005 up until 2016. The statistics showed the worst year for Chandler was 2006. An increase from 2015 to 2016 shows rape went up from nearly eight percent to roughly 13 percent.

As of 2014, Phoenix is home to nearly 1.6 million people and this number is expected to grow.

The FBI statistics not only showed an increase in violent crimes, but also a decrease of property crimes in the first six months of 2016 and a very slight decrease in murders in Phoenix.

On the other hand, Tempe saw a decrease in crime.

Tempe’s Public Information Officer, Sgt. Josie Montenegro, said, “There are sometimes areas that are impacted more, as there is an increase of high density population in small areas,” Montenegro continued, “A lot of the crimes committed are often crimes of opportunity.”

Considering the violent crime increases, both Tempe and Phoenix police departments are actively trying to control the issue.

“We continue to build relationships with our community in order to help better solve these crimes,” said Montenegro.

A violent crime is anything ranging from murder, manslaughter and rape to aggravated assault and robbery opposed to property crimes, which is defined as “…a category of crime that includes, among other crimes, burglary, larceny, theft, motor vehicle theft, arson, shoplifting, and vandalism. Property crime is a crime to obtain money, property, or some other benefit.”

“We start by identifying our top offenders, victims, organizations, and other nexuses of activity,” said Montenegro. “Then we analyze the places that these people are located. We then try to identify patterns amongst both and what problems we can address to stop the long term issues. As a Department, our number one goal is to fight crime and the fear of crime.”

For more about police efforts, residents can check their city websites for an outline of specific community plans.