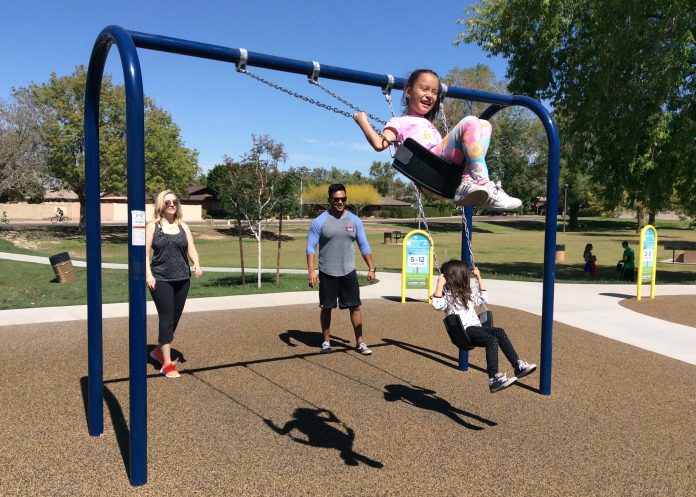 Chris Reyes remembers playing at Scudder Park as a young boy and over the decades, not much had changed there by the time he had kids of his own.

“It was the exact same playground!” he said.

But thanks to a major renovation at Scudder – one of more than 30 community-driven projects to update and enhance the city’s parks – Reyes and his daughters now have plenty of new things to enjoy when they visit.

A teeter totter for 8-year-old Lola. Swings and slides for 5-year-old Madeline. Grassy areas for running around. New lights if the mood strikes to walk over in the evening. Plenty of seating for Reyes and wife Jen to relax as they watch the girls have fun.

“It’s amazing what it’s done for the community,” Jen Reyes said. “It’s bringing triple, quadruple the number of people to the park.”

In 2015, the City Council committed $32 million to reinvest in Tempe’s parks as part of the citywide Capital Improvements Plan (CIP). In all, more than 50 parks and related facilities will receive improvements through the plan over the next several years. The projects are guided by input gathered from neighbors and other stakeholders near each park.

“Parks in the City of Tempe are really a gathering place for our residents,” said Mayor Mark Mitchell.

At about 42 square miles, Tempe boasts, on average, one park every square mile. Whether a cozy neighborhood spot or large amenity-laden space, these parks bring “a sense of community” that is vital in Tempe, Mitchell said.

As part of the CIP, park projects are prioritized based on several factors, including: public health and safety; maintaining existing assets; customer enhancements; and system expansion and new amenities.

Beyond that, city staff ranks park amenities by need to determine when each will be scheduled for improvements. Additionally, parks with fewer base amenities will take precedence over better-equipped parks. Ultimately, the goal is to ensure that park amenities are equitable and consistent across the city.

Once the city meets these base needs at parks, other enhancements could include dog runs, new sports courts, exercise equipment, community gardens, skate parks and walking trails.

So far, the CIP has touched parks in all corners of the city and breathed new life into neighborhoods. Selleh Park boasts a new playground, shade structure, swings and other amenities. Daley Park has new ramadas and game areas. Improvements at Harelson Park include renovated tennis courts with the addition of pickleball.

At Scudder Park, located west of McClintock Drive and south of Baseline Road, neighbors watched and waited as the improvements took shape.

Welcoming place to be

Dale Kiefer, who lives within walking distance of the 4-acre park, often brought his grandkids to the old playground. The aging and sparse equipment didn’t hold their interest for long.

But, on a recent day, two of his young grandsons ran back and forth across the new playground exploring slides and swings. They had played at the park the night before too, thanks to the new lights.

“I like how it’s designed, how it’s safe. I like the shade,” Kiefer said. “The colors really make it welcoming for the kids.”

The Reyes family has noticed something else at Scudder. They are amazed to see the birthday parties and other gatherings that now take place at the park. Even the simple act of flying a kite in the park stands out.

Brent Upstone, a Chandler resident, visits Scudder Park several times a week with his 2-year-old daughter Amaleia. She burns off energy while waiting for big sister Grace, who is 7, to end her school day at Rover Elementary School next door.

Upstone appreciates the two play structures for different ages and the openness of the space so he can easily watch both kids. The playground’s soft surface and shade structure are also a bonus.

“It’s a beautiful park,” he said. “It speaks volumes when you’re trying to benefit and bring a community together.”