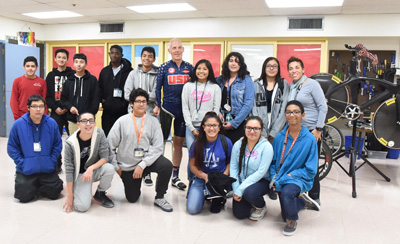 Life is full of challenges. It has its ups and downs. Some say it’s not about what one goes through, but how he or she deals with it. 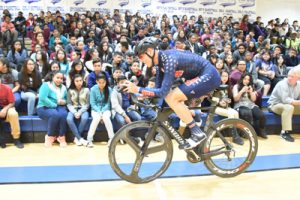 Perseverance, by definition, is the continued effort to do or achieve something or maintain a purpose in spite of difficulties, obstacles, or discouragement. Many would say Todd Key is the definition of perseverance.

Todd Key, a member of the 2016 U.S. Paralympic Para-Cycling National Team, visited Gililland Middle School on Monday, November 28, 2016 to talk to the students about perseverance, overcoming challenges, the effects of bullying, and never giving up on pursuing their dreams. First he spoke to the Recycle a Bicycle Class in their classroom. These students are learning about repairing and rebuilding bicycles as they recycle old bikes and bike parts, and then donate them to their community. Then he presented to about 600 seventh- and eighth-graders in the gym.

Key knows a lot about this. At just seven years old, Key lost the use of his right arm after falling out of a tree and badly breaking his arm. The compound fracture became severely infected and put Key in the hospital for nine months. His arm would never be the same. 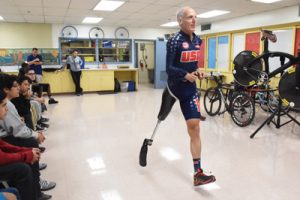 His fingers are now permanently closed, and his thumb can move ever so slightly, but has no function. His arm was left extremely misshapen, which meant, unfortunately but truthfully, that Key was a target for teasing and bullying.

As if this weren’t enough, Key would soon experience another “misfortune.” When he was 17, he helped his parents by laying insulation in the attic. Crawling around in the tight space on his hands and knees turned out to be more than Key bargained for. He soon experienced a tingling sensation in his leg and developed sarcoma, a connective-tissue cancer, in his right knee. Key had to have his leg amputated above the knee and then undergo two years of chemotherapy.

When he was in his twenties, Key decided to go back to school. He attended Arizona State University, where he soon learned he would need a bicycle in order to get around on campus. A “regular” bike like the average person rides obviously didn’t work for Key, so he gradually modified his, with the help of some very skilled people.

When on his bike, Key and his bike actually become “one.” What’s left of his right leg fits snugly into a cup-shaped socket attached to the bike right next to the seat. His right hand lightly grasps around a modified handlebar that is strategically positioned in the necessary spot. His left hand does all the work, shifting the electronic gears when needed, steering around corners, and braking at the crucial moments to keep him out of trouble, while maintaining maximum speed. 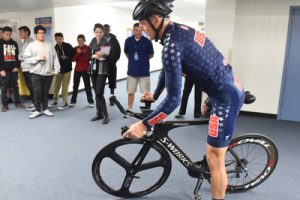 A “computer” inside his bike allows him to shift seamlessly, and with his left shoe clipped directly into the pedal, his left leg does all of the work. Because he has no “seat” muscles on the right side, Key essentially has to constantly stand up while he is riding. Has he ever fallen? “Many times,” responds Key. He just gets back up and keeps going.

Key talks openly about his prosthetics and how they have changed over the years. It used to be painful to wear the prosthetics. They pinched and caused raw skin and soreness. “But after the Iraq War and War in Afghanistan, with so many soldiers losing their limbs, prosthetics have greatly improved,” explains Key. “The materials they use to make them now include lighter weight material, like titanium and carbon fiber, and of course, the technology has improved, too.”

Key brought two bicycles and two prosthetic legs with him to show the students at Gililland Middle School. He demonstrated how his regular 10-pound walking leg differed from his under two-pound running blade. His racing bicycles are ultra-lightweight and aerodynamic, allowing him to race at top speed. Key also showed the students how quickly he can remove his prosthetic leg to then get onto his bike or vice versa. They were able to hear the robotic sounds they make as he made sure he was “snapped” into position. He compared himself to a “transformer” of sorts.

Key is currently the triple U.S. National Champion in Para-cycling for three consecutive years now. He rides his bicycle about 250 miles per week. Despite all the training and dedication to his sport, however, Key didn’t make it to the Rio Paralympics. He missed it by two spots. However, Key recently beat a Multi-World Champion in a World Cup time-trial by eight seconds! Another one of life’s ups and downs for Key.

“I just think it’s amazing how he was able to overcome these obstacles,” said Eighth-Grader Adrian Duran. “After hearing his story, I feel like I can do anything!” 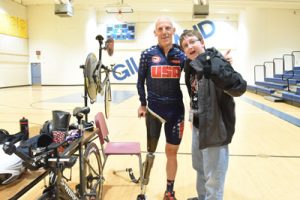 Although suffering emotionally as well as physically during his teenage years, (which can be a very trying time in life without similar challenges), Key felt like giving up many times, but he didn’t. He persevered and decided to turn to snow skiing and cycling, in which he found a whole new incredible world where he could feel “normal” again. On the snow or on a bike, he never felt like he was missing his leg or had an arm that didn’t function like most people’s. He also likes to play golf and started running about a year-and-a-half ago. He now runs five miles every other day, in addition to riding his bike just about every day.

Key now shares his experience with others every chance he gets, hoping he can bring a his new found freedom to others and remind them to never give up, no matter what challenges they face and no matter how many times they may get knocked down.

“When you feel like things aren’t going your way and you want to give up, find something you like to do and pursue that, no matter how hard it might seem at first,” recommends Key.

After his presentation to the 12- and 13-year-olds, a few people approached Key, thanking him for his inspiring message. One boy shook Key’s hand and said, “You are a survivor!”

Key probably has no idea how many people he has inspired simply by being the person he is, persevering and persisting after all that he has been through.

The popular saying: “When life gives you lemons, make lemonade” is used to encourage optimism and a positive can-do attitude in the face of adversity or misfortune. If anyone has made the best of the negative situations in life and taken this phrase to heart, it’s Todd Key.