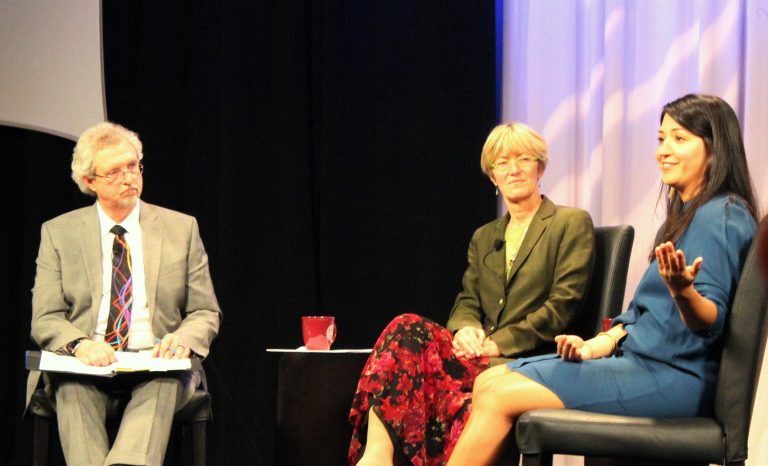 By Hanna Plotnik and Hana Dement

ASU School of Civic and Economic Thought and Leadership brought in two professors to discuss the implications of protests that turn violent during a panel at the downtown campus on Feb. 12.

This is the fifth event in a series that aims to address the many characteristics of persuasive protests versus extreme protests.

Professor Allison Stanger, one of the panelists from Middlebury College, was brutally harmed while trying to flee aggressive protesters during an event where Charles Murray was invited to speak in March of 2017.

“It is very much a question of recognizing the legitimate anger, but at the same time trying encourage the students to see how they can channel the productive direction to bring about the change they want to see,” Stanger said.

The other panelist, assistant Reed professor Lucía Martínez Valdivia was ambushed during a lecture by a group of students who were visually protesting and condemning the course and the teachers for teaching what they claimed were white supremist texts.

At the beginning of Valdivia’s classes, she likes to address the topic of hate speech and its protection under the First Amendment.

“Once you start censoring the rights of other people to say what they think, that is a very slippery slope,” Valdivia said.

Ariel Salk, an ASU student asked, “How do we educate this generation on proper ways to protest?”

Valdivia responded by saying, “We lead in part by example, if you actually want to affect change, you need to persuade people you can’t just silence them.”

In order to effectively protest, people need to know how ask tough questions and how to beat assumptions.

“To know how to reason and how to argue is the best thing we can give our students,” Stanger added, “The one thing you don’t have the right to do is interfere with the rights of others.”

Jonah McCoy, a student at ASU, feels that protests that turn violent are a sign of a decline in society.

“Once we start resorting to violence we already know that democratic principles are going out the window,” McCoy said, “Even in these places which are supposed to be bi-partisan, in which empirical truth is to prevail, instead we have partisanship.”

Lisa Kahn and Ali Kahn, parents of a student at Middlebury College who invited Charles Murray to speak, feel that free speech is vital to the survival of any nation or any country.

“Even more important, particularly to the topic of today’s speech, is free speech on campus,” Lisa Kahn added, “It is the job of the administration to allow people to understand both perspectives and to find their truth.”