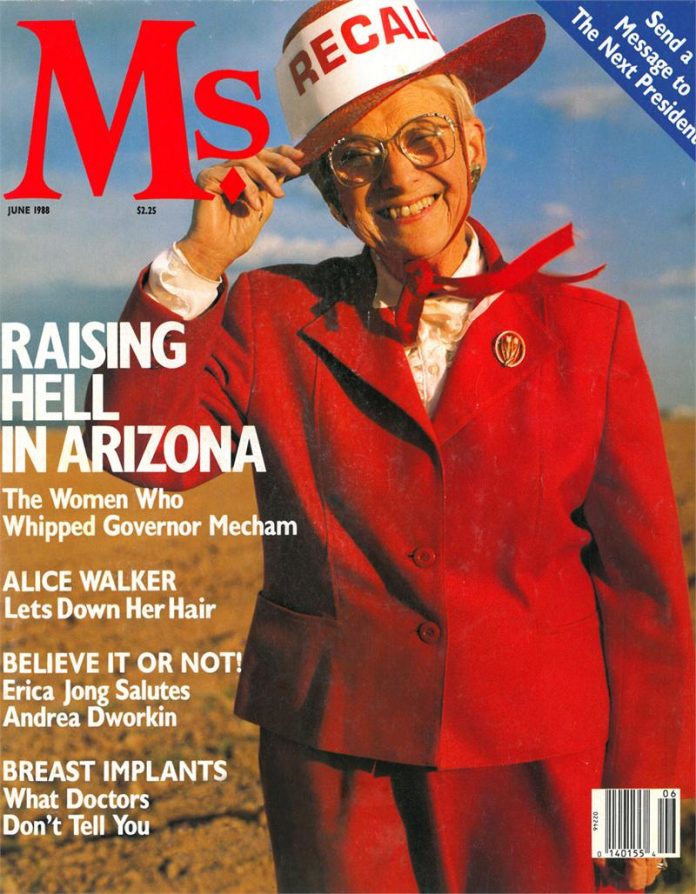 In Tempe at this time of the year, the Tempe Community Council (TCC) solicits nominations for the annual Don Carlos Humanitarian Award. This is an excellent opportunity to reflect on the past winners, including the 1990 recipient named Ms. Naomi Harward. It is also time for us to look forward to recognizing the new winner.

Naomi Harward was born on February 25, 1907. She was well educated and raised a family. When she joined the social work faculty of Arizona State University in 1955, she started living in Tempe. Ms. Harward had more academic and social activist accomplishments than can be listed here. The Social Networks and Archival Context (SNAC) center, which is hosted by the University of Virginia, has a comprehensive summary of Ms. Naomi Harward’s life as a scholar and an activist, which is publicly available online. This article will describe some of Ms. Harward’s local Tempe involvement.

Naomi as we called her, was a very incredibly dear friend of ours. Naomi had many friends, and quite a few political enemies as well. When I met Naomi in 1987, she was the Chairwoman of the Mecham Recall Committee. This organization was dedicated to the recall of former Governor Evan Mecham, which I joined.

Naomi and I were an unlikely duo. She was an Anglo woman who was about 78 years old when I met her. I was a young Hispanic labor activist, who was born into a Spanish speaking household, with more than my share of labor struggles by then. I was one of many who assisted Naomi, in what was the most divisive Arizona political effort in my lifetime. In her struggle against bigotry and for justice, Naomi never backed away from political conflict. We loved her for that.

Gov. Evan Mecham said plenty of things that infuriated plenty of minorities, gays and women. We channeled our fury into a recall petition drive that successful put Evan Mecham back on the ballot. Mecham was impeached before the recall election took effect. The Mecham Recall Committee put as much pressure on the state legislature as we could, to facilitate that process. It worked.

I visited Naomi’s house frequently in those days. Naomi did not speak a word of Spanish that I knew of. But her face would always light up when I called her “mi abuelita política”, which means my political little grandmother in Spanish. I loyally served Naomi as one of her trusted petition coordinators in the Mecham recall effort. We endured the constant verbal profane and sexually explicit bigoted threats from the supporters of Mecham which we called “Mechamites”. Naomi would often send me into the worst places, and I went.  Naomi would always refer to me as “wonderful”, but nobody could ever say it like her.

After the Mecham recall days, Naomi and I were part of Tempe neighborhood coalitions. Naomi requested that I support Barbara Sherman for Tempe City Council in 1988. Immediately after Naomi’s request, I started organizing the Tempe organizational recall forces to back Barbara Sherman.  Barbara won the on the first round, which was also the first time she ran for office.

In 1990 we backed Dennis Cahill for council and we lost, but we had a strong showing. To no one’s surprise, I was accused of the usual political misdeeds, which sounds familiar today. But if mi abuelita política told me I was wonderful, which she always did, I would surely do it again. In 1992 we backed Dennis Cahill again for council, and Dennis not only won on the first round, he was the top vote getter as well.

Sometime in 1994, Naomi was diagnosed with Alzheimer’s disease. In Naomi’s courageous style, she spoke about it for a newspaper article, so that others and their families could help understand the implications of the condition. When she passed away on March 28, 1995, like many of her friends, I went to her funeral. Without being disrespectful, her funeral was definitely the most upbeat funeral that I have ever been to. I was uncomfortable about even feeling that way. My other recall friends told me that is was a celebration of her life, and we certainly felt the same. Naomi’s family celebrated her life as well. I will always remember how Naomi’s family told us that of all the groups she was associated with, her recall colleagues had unique special place in her heart.

Although Naomi did not seek the media limelight, she was a media celebrity. She was only contacted by the media because of her activist works. Naomi graced the cover of Ms. Magazine with her presence in June 1988, for her efforts on behalf of the Mecham Recall Committee. She was in more newspaper articles and television reports than I can count. I had a few Tempe newspaper archives, which I included for this writing. If anyone has other stories about Naomi’s life, please feel free to share them.

Back in 1990, no one deserved the Don Carlos Humanitarian Award more than mi abuelita política Naomi Harward.  As life in Tempe continues to move forward, it is now time for someone else to win this coveted award, and to keep this tradition alive. 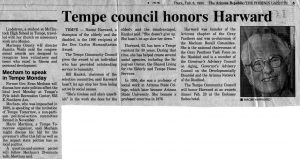 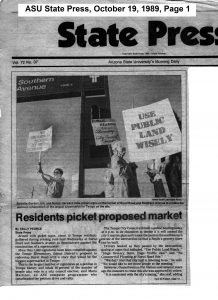 Serrano’s Hosts ‘Pink Out’ Event in Memory of Stephanie Serrano