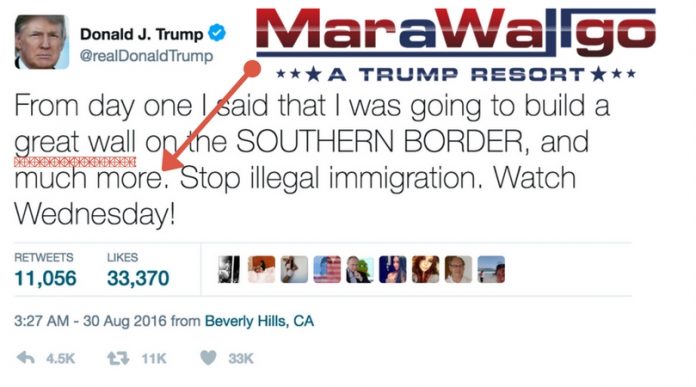 During his campaign, President Donald Trump promised to make America great again. That’s why 63,000,000 intelligent, future-minded Americans elected the host of Celebrity Apprentice into the Oval Office. Many Democrats and young adults and half of the entire country gasped audibly in horror at the election results, but two months into his Presidency, we know now that all these concerns were WRONG.

In fact, all of his opponents were WRONG, because President Trump is going above and beyond to make America great again! Yes, you heard it first here-not only is President Trump spending hours of precious time complaining about being wiretapped, standing up to the media on behalf of himself and his gorgeous hair, and deporting half of the country to foreign lands, he is now building Mar-a-Wallgo!

What is Mar-a-Wallgo, you may ask? Well, in my opinion, it’s pretty much the best idea ever, provided by the most intelligent, sensible man to walk the earth, President Trump. To make America Great again, the President will be initiating the construction of a mega resort along the border of the United States and Mexico. Thirty-eight hotels will span the wall, not only protecting Americans from (gasp!) Mexicans, but also generating tons of revenue as American tourists spend money they don’t have!

Why should Americans explore their own state parks and natural wonders when they can drive or fly across the country to stay at Mar-a-Wallgo, presented by a middle-class, hardworking, deserving man like President Trump? For Arizonans in particular, it’s time to get over that gaping hole in the ground better known as the Grand Canyon. Why would you want to stare at a bunch of rocks when you could stare at President Trump’s portrait, hanging in the lobby of an exquisitely expensive hotel that has absolutely zero impact on the environment and obviously didn’t cost taxpayers a cent to build!

In fact, Mar-a-Wallgo is so much more promising than any tourist destination in the country. 11 million people are expected to visit Mar-a-Wallgo’s environmentally-friendly and exclusively-American hotels every year, while only 5 million make it to the Grand Canyon each year.

Sure, Arizona tourism may suffer a little bit, and it may just go down the drain completely, but President Trump doesn’t mind. He’s more concerned about protecting his nation from any and all immigrants, with the exception of his wives, and directing all tourism traffic to a Trump owned-and-operated company. Arizonans should have no issue with this attack on their state tourism industry, because that would just be WRONG!
Anyway, that’s just my two cents. I am looking forward to staying at this five-star resort and supporting my billionaire President!