We’ve seen a plethora of press, mailers, and nasty TV ads designed to confuse voters about the Clean Healthy AZ ballot initiative, Prop 127, which would require regulated utilities in AZ to meet 50% of their electricity needs from clean, renewable sources by 2030.

Is the Clean Energy for a Healthy AZ ballot initiative good for Arizonans? No doubt about it. And not a moment too soon, given the newly released IPCC report that portends global catastrophe by 2040 if cites, states, and countries fail to phase out fossil fuels. I hope to be alive in 2040 and I want to be able to tell my grandchildren that we acted against these threats and embraced a clean-energy future. That’s why, in my city of Tempe, we passed a 100% renewable-energy goal and, in my state, to be on the right side of history, we must pass a 50% goal on November 6th.

The State of Arizona is woefully behind on clean energy. Solar provides only 6% of our electricity, while fossil fuels power over 90%. On the other hand, Nevada, Vermont, Nevada, and Massachusetts all generate more electricity from solar than our sunny state.

The chart below shows that  “Other Renewables” (solar and wind) are a tiny fraction of the energy Arizona consumes compared to coal, natural gas, and nuclear power. 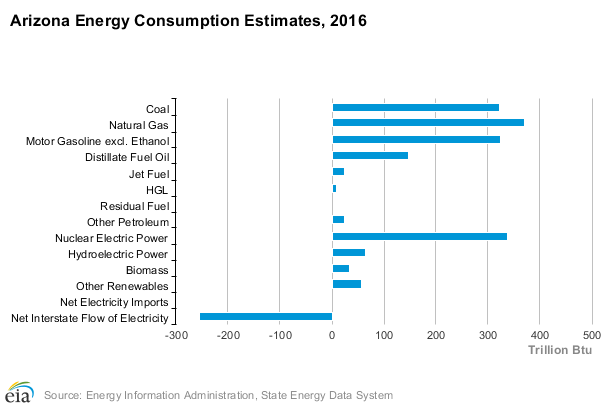 Arizona exports about 30% of its power, much of it coal, out of state. The nearly 50-year-old Navajo Coal plant in AZ supplies much of California’s coal-fired electricity. That means that, while Arizonans suffer the pollution, coal ash, acid rain and mercury contamination from coal-fired electricity that’s shipped to California, utilities pocket the profits.

Arizona Public Service (APS) plans to spend over $4 billion on investments for its coal, natural gas, and nuclear plants from now until 2020, but a measly $62 million on solar. Western Resource Advocates determined that a high-renewables portfolio would actually save APS ratepayers $300 million more than the APS proposal. APS also benefits greatly by purchasing dirt-cheap excess solar generation from California, selling it to AZ ratepayers at retail rates.

APS has poured tens of millions into a dark-money campaign to fight the 50% by 2030 ballot initiative. AZ Attorney General Mark Brnovich, the beneficiary of $425,000 in dark-money spending, reportedly rigged the Prop 127 ballot language to aid in this disinformation campaign. Another APS-related group has amassed $3.2 million to spend on candidates friendly to fossil-fueled energy.

Where does APS find so much money to crush any potential competition? Shareholder returns are up a stunning 100% over the past five years. APS increased its earnings over $40 million in a single year, to nearly $500 million in annual profit. APS has a profitable monopoly and will do whatever it takes to maintain and increase those profits.

Although Arizona Corporation Commissioner Andy Tobin has a proposal to get to 80% clean energy by 2050, that proposal contains two poison pills: 1) Palo Verde, AZ’s 35-year-old nuclear power plant would count as “clean” and 2) utilities would be granted 32 years to reach the 80% goal.

No other state in the US allows nuclear power to be lumped in with truly clean power generated by solar, wind, and geothermal in renewable portfolio standards. Why? Palo Verde nuclear plant is so large that including it as “clean energy” would drastically reduce the amount of solar required.

Solar is incredibly cheap, with one contract in Tucson for solar-plus-battery-storage at 4.5 cents per kilowatt-hour (kWh), and the solar portion an estimated 3 cents/kWh. Arizona currently spends $2 to $3 billion each year to import coal, natural gas, and uranium fuel from out of state. Although coal power is cheap to generate — usually about 3 cents/kWh), the damages from each kWh of coal are a stunning 17 to 27 cents.

Solar has other values besides low costs, such as nearly zero water use, free “fuel,” and no greenhouse gas emissions. Arizona would benefit from the Clean Healthy ballot initiative to get 50% clean energy by 2030, and, like our neighbor Colorado, we will find that clean energy saves us money, drives our economy, conserves our precious water resources, cleans our air and, ultimately, saves lives.

For too long, our regulated utilities have stymied the growth of solar and run roughshod over what is best for Arizonans.

The age of consequences has arrived, and the benefits of solar and other renewable energy are real.  Now it’s up to us to realize those benefits, to vote YES on Prop 127 and catapult Arizona into a clean-energy future.