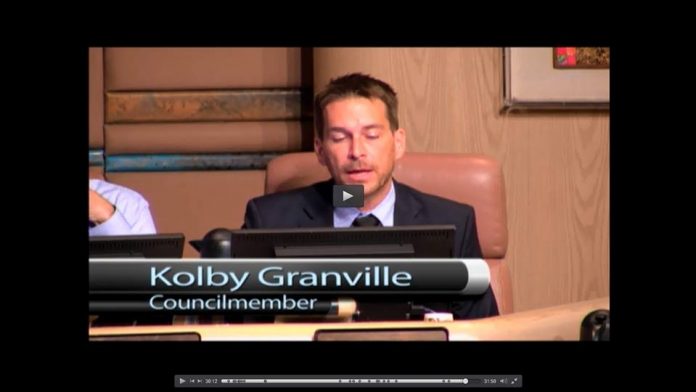 A report written by outside attorney Mr. James Burr Shields, was presented to the City Council on April 6th. The report established overwhelming evidence, that Councilmember Kolby Granville mistreated an unnamed assistant city attorney with, in an abusive fashion.

Granville’s failure to pay these costs will make him look like a fiscal deadbeat in respect to his financial restitution responsibilities. The restitution issue was totally neglected in the April 6th meeting.

There is upcoming meeting that is scheduled for April 20th, , and the public is encouraged to attend. Hopefully, the council will discuss the restitution issue and allow public comment. This issue was not discussed in the April 6th meeting. Hopefully that is expected to change in the next meeting.

While the City perhaps might not be able to force Granville to repay the attorney fees, there is no ordinance that would prevent Granville, from voluntarily paying back the City for these fees, stemming from his abusive actions. Granville has a moral imperative to pay these costs, and a political imperative as well. If he seeks further City office, voters will be well informed if he prefers to become just another fiscally deadbeat public official instead.

The sole reason for this incredible city ethics circus is Kolby Granville. As Tempe citizens, we have watched and paid for this his abuse of an employee, who has served our community so well. If a fine assistant city attorney, is absolutely not permitted by Tempe Personnel Code to tell Mr. Granville that his legal opinions are “sh—ty”, then Mr. Granville should not be allowed to either.  It’s not difficult.

For not effectively figuring out it sooner, Mr. Granville cost Tempe voters and taxpayers a lot of money, and some are not amused. It is time for Mr. Granville to pay up, and not stick the taxpayers with the expensive tab.