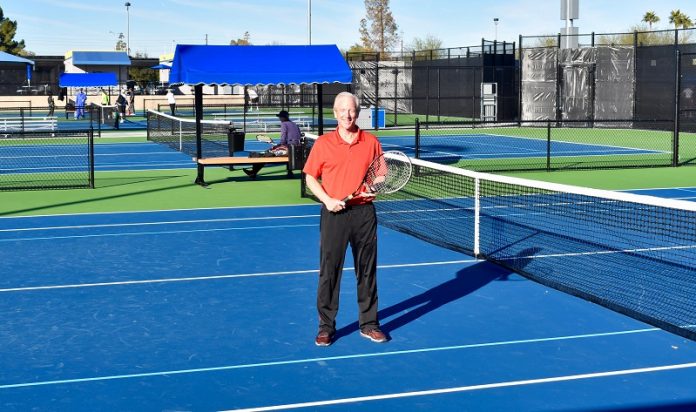 Just 30 years after baseball became an official American pastime, another sport was also making its mark. The first tennis court in the United States was built in 1876 and racquets have been swinging ever since.

In Tempe, tennis has a longstanding presence. For 43 years, residents have enjoyed the courts at Kiwanis Tennis Center, taking classes with quality instruction that rivals the most elite country clubs. This month, Tempe’s Kiwanis Tennis Center will set a new bar for the Valley, bringing the game of tennis into the millennial when it reopens with brand-new courts.

For the past decade, Larry Funk ran the show at Kiwanis. He joined the Tempe team in 2008 as a senior recreation coordinator for the tennis program.

“I love tennis. I’ve been involved in it my entire 40-year career,” Funk said. “Coming to Tempe gave me the opportunity to be more active in the day-to-day operations of the game, allowing me to be more involved, get more hands-on.”

Tasked with operations, programming and facility management, Funk was greeted with a solid tennis program but aging infrastructure. Outdated courts, a failing light system and a sub-surface that was deteriorating created challenges for attracting tournaments and other events.

“The past two or three years have been a challenge because the aging facilities were not as good as the programs,” Funk said. “To see what’s happening now is really exciting.”

Bringing tennis into the digital age

What’s happening now is the complete renovation of the tennis center. It is now full of features that no other public facilities in the Valley can offer. In fact, some of those features can’t be found anywhere else in the country.

“The most unique feature we’ve installed is the Playsight Smartcourt technology, which will be a huge benefit to tennis players, coaches and families,” Funk said. “We are the largest public facility in the country with all of the courts having this technology.”

The new Playsight technology includes two high-definition cameras on all 15 courts that can record a player’s serves, volleys and strokes. The cameras also provide analytics on how hard the ball is hit and whether it lands in or out of bounds. All this information is recorded, letting players and coaches look back on the game to improve their skills. The video feeds can also be live-streamed so family and friends can watch the match from anywhere in the world. Players can even post their videos on social media.

The cameras aren’t the only unique features. The tennis center is now the only public facility in the Valley that is using Plexicusion Prestige to cover the new post-tension concrete courts. This cushioned surface is also the official surface of the Australian Open. It is easier on the knees and helps the balls bounce a little slower, making it the ideal setting for recreational tennis.

Kiwanis Tennis Center was also completely redesigned and now offers seating and shade structures for spectators between the courts. Energy-efficient LED lights will shine more than two times brighter than before.

News of the renovated tennis center has already begun to spread. Colleges from across the country are interested in the facility, which can now offer a unique experience for tournaments and events.

“We’ve always had strong local programs, lessons and leagues,” Funk said. “With these enhancements we will attract more national and regional tournaments and special events that will fill up the tennis center on weekends and in between local programming.”

That means more visitors to Tempe and the economic boost that follows them here. In fact, the men’s teams from ASU, Illinois, TCU and Mississippi will practice on the new courts for the first time this month.

Teaching love of the game

Larry Funk’s vision for the Kiwanis Tennis Center helped pave the way for what will become a true tennis destination in the Valley. Though he loves all aspects of the game—the physicality and level of difficulty—his greatest reward comes from teaching the tennis novice.

“It’s about introducing people of all ages to the sport, getting them hooked, then watching them go on to play in school or with a league,” Funk said. “It’s about growing the game of tennis.”

Funk retired from the city in late 2018 but plans to stick around to help.

“I’d like to continue to share ideas and stay involved on a smaller scale,” Funk added. “It’s time for me spend time with family. And I can start playing again. I haven’t been playing as much as I’d like.”

A reopening celebration is being held on Saturday, Jan. 12, from 9-10:30am at Kiwanis Tennis Center, 6111 S. All-America Way. It’s free and open to the public. Visit tempe.gov/tennis for more information.

SCOTTSDALE FASHION SQUARE GETS BACK 2 COOL FOR SCHOOL ON AUG. 7