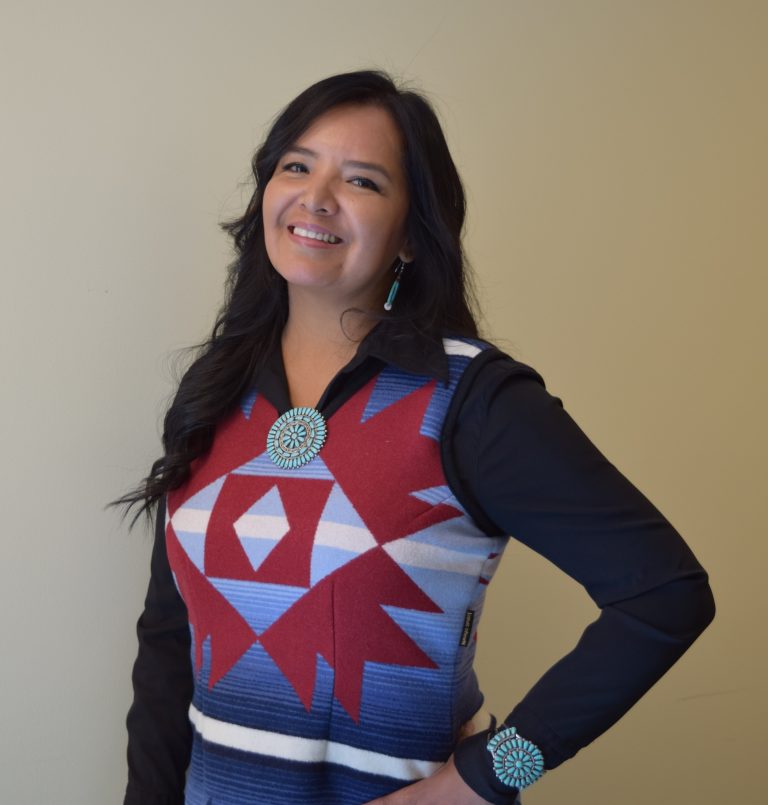 Geri Hongeva has been working in the field of sales, marketing and public relations since she was a young girl, she has been groomed to be fluent in both the Navajo and English language.

Although she grew up in Flagstaff since the age of five, Geri has remained fluent in the Navajo language. She considers her father, a Vietnam veteran, to be her role model. He encourage her and her two brothers to speak only Navajo at home. “My father would tell us that anyone can learn English, but Navajo will give you a rich life and it will save you in time of need,” stated Geri.

Geri also spent a lot of time with her great grandmother and grandparents at Black Mesa. She spent her summer breaks, winter breaks and weekends herding sheep along with all the kids in her family, where they only spoke Navajo. She is the eldest granddaughter, and was given a Navajo name by her maternal grandfather, Asdzą́ą́ Kinłání, which means Miss Flagstaff.

At an early age, Geri learned to market products to sell at the trading post, or negotiate the price of her grandmother’s rug. She traveled with her great grandmother & grandparents to be the translator for them. She learned to be a confident sales person at such a young age with her fluency.

In 2001, Geri received her BFA degree in Visual Communication from the School of Communication, Northern Arizona University. She began working as an intern at NAU, and when she graduated, she was hired as full time media specialist for TechShare Project, which helped teachers with Navajo language preservation in elementary schools. She was also a creative director for Anthropology, assisting in protecting sacred sites on the Colorado Plateau. Geri worked for NAU for over 8 years and is very knowledgeable of Native American Cultural Preservation.

Geri has worked for Navajo Parks & Recreation, Navajo Nation Fair and the Navajo Division of Natural Resources for a total of 8 years as the media representative, where she heavily promoted travel and tourism on the Navajo Nation.  She served a vital role in initiating and coordinating the Monument Valley Balloon Event consecutively for 4 years.

As the media representative, she was given the task to be the lead spokesperson for Navajo Tribal Parks for Nik Wallenda’s “Skywire” tightrope across the Little Colorado River Gorge in 2013. She worked with the Discovery Channel, Peacock Productions and the TODAY Show to broadcast live, to 13 million viewers, 219 countries with a record setting 40,000 tweets per minute on Twitter.

In July 2013, Geri was selected by Deluxe Studios to be the voice of C3PO in Star Wars: Episode IV, A New Hope, which was dubbed into the Navajo language, and has gained international attention for the Navajo tribe and its language preservation. She is the only female person to voice the droid (C3PO) in the history of Star Wars, which has been translated into 50 different languages.

As a mother of two, Geri continues to instill the Navajo language within her children. Her daughter attended Puente de Hozho, a Navajo language immersion school in Flagstaff, so she can read and write the Navajo language at an intermediate level. “She is the person I go to for correct spelling in Navajo, because I cannot read or write Navajo fluently. Together we make a good team,” explained Geri.

Her son will be graduating from NAU in the spring of 2020, following in her footsteps, from the School of Communication with an emphasis in video production.

Geri’s hobbies are photography, hiking, running and riding her motorcycle. Geri donates her time as a board member for Navajo Hopi Honor Riders, an organization with a mission to remember all fallen warriors and showing appreciation for Native American veterans.

“My father died of Agent Orange when he was only 49 years old, he was my hero. I was 24. He never declared to be a veteran to people, he was very quiet about it. I spent the last two years of his life taking care of him every day, getting him through chemo, radiation. It has to be the hardest time of my life, to see your father go through the suffering and then letting him go,” said Geri.

Persistence, growth, prayer and love was instilled in her by her parents, grandparents and great grandmother, using this she got through the difficult times. Geri continues to strive in her profession, as well as growing as a leader in her community by dedicating her time to nonprofit organizations.

April 2019, Geri was elected president of Arizona American Indian Tourism Association and has been an active board member since 2008. The 501c nonprofit organization promotes travel and tourism by working with all the 22 tribes in Arizona.

Geri enjoys being a senior casino host at Twin Arrows Casino Resort, where she has the opportunity to use all her skills, including her language. “I enjoy working for Navajo Gaming Enterprise because I have seen how much it has strengthened the Navajo economy in the past six years, at the same time, helping many families to work here locally,” stated Geri.

Her advice to those interested in joining the team at NNGE, “Be persistent, continue to grow as an individual, ask for advice, a lot of hurdles can be solved by simply communicating.”

“Geri brings a wealth of knowledge about the Navajo culture and language which we utilize to educate our internal and external guests to promote Navajo. She has become a vital asset in dealing directly with our guests which include locals, tourist and business leaders. The Team can count on her to help educate others about Navajo Gaming with her experiences leading up to the role as Senior Casino Host. When hiring we strive to add team members that have great qualities such as integrity, intelligence and energy; and if you have met Geri she exemplifies these qualities in her position.” Ken Johnson, Director of Marketing Twin Arrows Casino Resort, Hongeva’s supervisor.

For all the Star Wars fans out there, the Museum of Northern Arizona will have an exhibition called, “The Force is with our People,” from Oct. 5, 2019 to March 2020. They have invited Geri to be a part of this exhibit. Her C3PO cosplay costume and other personal memorabilia will be featured items.

To join the Navajo Gaming team go to https://www.navajogaming.com/about-navajo/jobs/

Navajo Nation Gaming Enterprise, in less than 10 years with the completion of four successful casinos, created over 7,425 direct, indirect and induced jobs with an overall economic output of over a billion dollars. The award winning AAA’s coveted Four Diamond Twin Arrows Casino Resort shares Navajo Culture through architectural nuances and local artists. Each of the property dining eatery establishments feature “Navajo Beef,” and traditional cuisine of the Navajo people. An invitation to stay, play and relax at one of our properties is an open welcome to the Navajo Nation’s beautiful scenic transformation.