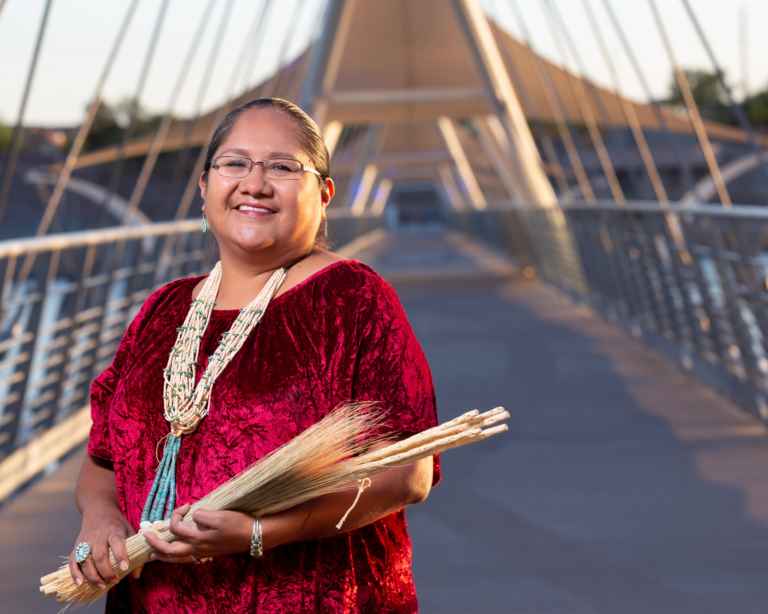 I recently met Debbie Nez-Manuel, an enrolled member of the Navajo Nation with roots in Klagetoh. Her early years in the small community among hardworking ranchers, weavers, mill workers, teachers, attorneys, silversmiths, and veterans instilled not only a strong work ethic and identity but also the responsibility to be a leader wherever she is. Talking with her now, it doesn’t take long to see that she took those lessons to heart.

Now, she is seeking to put her experience as a social work professional with a Masters in Social Work from Arizona State University, as a youth advocate, and a tribal consultant to work in the Arizona House of Representatives. Debbie is a candidate for the House from Legislative District 26, which includes the Salt River Pima-Maricopa Indian Community, northwest Mesa, north Tempe, and parts of south Phoenix. If successful, she would be the first Arizona Native woman elected to the legislature from Maricopa County. Running for state-level office is hard work but clearly in line with her can-do outlook of ‘Why not me? Why not now?’ You can see that attitude in three examples.

In 2013, Debbie and several colleagues realized that many young tribal people living in urban areas had become disconnected from their home cultures and languages. Many struggled with getting jobs, more education, and finding their own pathways to adulthood. She helped start Morning Star Leaders to address those issues. Today, Morning Star is well established and a premier source of initiatives for Native youth development and support in education, employment and other areas. The Arizona Humanities Council honored Morning Star with its Community Partner Award in 2019.

Second, during the 2019 legislative session, Debbie helped lead a grassroots effort to enact House Bill 2570. Her own story about losing her mother at the age of three encouraged others to tell their stories from around Arizona of missing and murdered Indigenous women. The bill, which passed the House unanimously, was adopted by the Senate, and signed into law by Governor Doug Ducey, set up a legislative study committee to look closely at the prevalence and cases of missing and murdered indigenous women and girls (MMIW). Data have pointed to significant problems throughout Arizona for some time but a comprehensive study with recommendations has not been done. Debbie now sits on the task force with other tribal leaders, law enforcement professionals, state legislators, and others.

Most recently, Debbie became the first indigenous woman elected as a national committee person for the Democratic Party.

Nancy Welch, the former vice president of the Arizona Center for Civic Leadership who met Debbie when she became a Fellow in the statewide, independent Flinn-Brown Civic Leadership Academy, has endorsed Debbie in her bid for a House seat. She said, “Debbie can help make changes in education, health care, and jobs that will benefit all Arizonans over time. She is a thoughtful, persistent problem solver who works from the facts to get things done but she doesn’t worry about who gets the credit.”

Debbie has lived in the Salt River Pima Maricopa Indian Community for 16 years with her husband and daughters. She worked for the tribal government as a social worker for 12 years. With husband Royce Manuel, a tribal member of Salt River Pima- Maricopa Indian Community who is well-known for perpetuating traditional language and practices, she is a popular speaker for the AZ Speaks program of the Arizona Humanities Council.

To learn more about Debbie Nez-Manuel and her candidacy for the Arizona House of Representatives from Legislative District 26, please visit https://www.debbieforaz.com/.