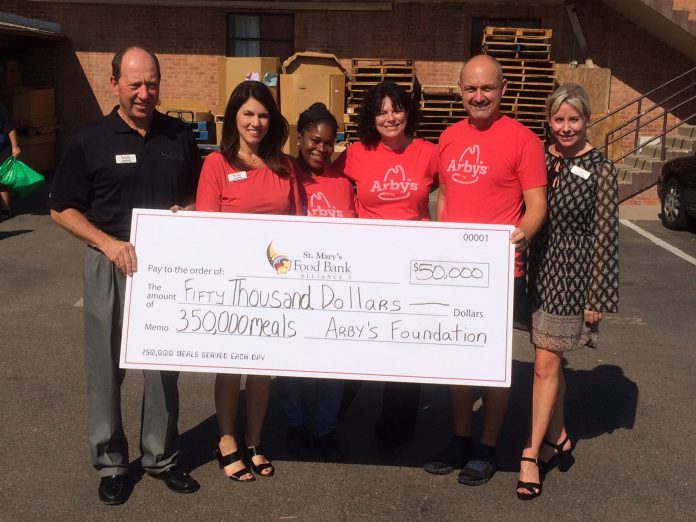 “All of a sudden we have 20,000 people that are homeless and living in these shelters [in Houston],” said Jerry Brown, director of public relations for St. Mary’s Food Bank.

Following the effects of Hurricane Harvey in Texas, St. Mary’s Food Bank saw a vast majority of its resources being sent to those affected by the storm, leaving their normal activities in Arizona in need of help to replenish those shortages. Brown, however, does not doubt that it was the right thing to do.

“We had all our St. Mary’s employees sign the bin that covers the top [of the boxes]. They all signed their own messages to the folks.”

On September 5, members of the community volunteered at Mercy Hill Church in Phoenix to pass out food to community members as a part of St. Mary’s Food Bank Mobile Pantry program. Though this appeared to be like any other Tuesday morning of volunteering at Mercy Hill, among those volunteers were over 20 employees dressed in red, Arby’s t-shirts.

With devastating aftereffects impacting community members in Texas, local organizations couldn’t help but look for ways to bring Texas back to their feet.

Fx4 is a 47-unit Arby’s franchisee that operates out of Gilbert. Their mission, “fantastic food, fast and friendly” only touches the surface of the mission by which their volunteers were helping the community that morning. The smiling faces of those volunteers and their enthusiastic greetings to community members, showed the strong partnership that Arby’s, and its local employees, has developed with agencies of St. Mary’s Food Bank.

The Arby’s franchise, or the parent company of Fx4, heads the Arby’s Foundation which generates grants to many charities. Through the Arby’s Foundation, St. Mary’s Food Bank received a grant of $50,000, which equates to about 350,000 meals, in hopes of replenishing its supplies after sending help to Texas.

Aside from contributing monetarily, Arby’s also launched a one-day campaign to get the community involved in giving. On September 5, customers at any Arby’s across the Valley could receive a free Classic Roast Beef sandwich after donating one dollar for St. Mary’s Food Bank.

“Sometimes you want to help, but you don’t know what to do,” said Jay Johnson, vice president of operations for Fx4. “Having a liaison like St. Mary’s, they have such access to the community and what their needs are, then we don’t have to guess.”

Tom Kertis, president and CEO of St. Mary’s Food Bank, is just as thankful for donors like Arby’s and agencies like Mercy Hill.

“We go from where there is excess food, and we get it to where there is shortage of food. That’s our job,” Kertis states. “We have financial donors, like Jay and his team. We also have donors that donate products to us. Then we have to have our agencies, our hands and feet on the street. It’s a whole process and we couldn’t do it without the whole team. No one part of the chain is more important than the other.”

Med Skeens, a pastor at Mercy Hill Church, was equally as humbled by the opportunity to partner as an agency of St. Mary’s Food Bank, opening their doors to the most vulnerable in one of Downtown Phoenix’s poorest communities. His church serves as a mobile pantry every Tuesday where members of the community are able to come and fill their baskets with food.

“Mercy Hill Church wanted to be that conduit,” he said. “We aren’t the big givers, but we give our property, we give our volunteers, our time and our heart.”