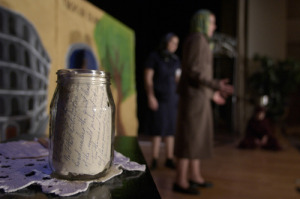 My Local News Arizona - Advertisement
(Chandler, Arizona) – The Greater Phoenix Jewish Film Festival, East Valley Jewish Community Center and City of Chandler will combine forces for a remarkable event that underscores the idea that one person can make a difference in the world. This long-standing partnership between the East Valley city and two Jewish organizations present the play “Life In a Jar: The Irena Sendler Project” on Thursday, January 12, at 6:30 pm at the Chandler Center for the Arts in Chandler.
The theatrical production is part of the Chandler’s Celebration of Unity, a series of events the City of Chandler holds in January to honor its community’s heritage and diversity.
The centerpiece of Life In a Jar: The Irena Sendler Project is an 80-minute performance that touches on the Holocaust, ethics, education, respect and unsung heroes and brings a message of hope, not despair. The play originated in a small classroom in a small town in the Midwest in 1989. Four girls were challenged by a teacher to create a National History Day project which, among other goals, would illuminate his classroom motto: “He who changes one person, changes the world entire.” The students discovered the little-told story of Irena Sendler, a Polish Christian woman who smuggled 2,500 children out of the Warsaw Ghetto during World War II. The world soon caught notice of this unsung hero of the Holocaust and her accomplishments and ultimately led to Irena being nominated for the Nobel Peace.
The performance will be followed by a question and answer session with current cast members, Megan Feist, one of the four students who created the play, and Norm Conard, the history teacher whose assignment led to the Irena Sendler movement and who is now the Executive Director of the Lowell Milken Center in Fort Scott, KS, which works with schools around the world to teach respect and and understanding among all people. Representatives from the City of Chandler, State of Arizona and the Polish Consul General of Los Angeles will also be in attendence.
The Greater Phoenix Jewish Film Festival uses the film version of Life In a Jar as the cornerstone of its Films in the Schools youth outreach program. Carefully trained presenters bring the film into public and religious schools to help teach the sensitive topic of the Holocaust. Since the school program began nine years ago, the GPJFF has shared this film with over 3,900 secular and religious school students.
On Friday, January 13th, 800 Chandler-area high school students will be bused to the Chandler Center for the Arts for a high school-only assembly and free presentation of the program.
For more information on the event, go to https://www.evjcc.org. To purchase tickets, call 480-897-0588, email [email protected] , or visit the East Valley Jewish Community Center at 908 N. Alma School Rd., Chandler.
DETAILS:
WHAT:             Life In A Jar: The Irena Sendler Project
WHERE:          Chandler Center for the Arts, located at 250 N. Arizona Ave., Chandler
TIME:                6:30 – 8:00 pm
COST:                $10 adults, $5 students (age 25 & younger w/ ID)