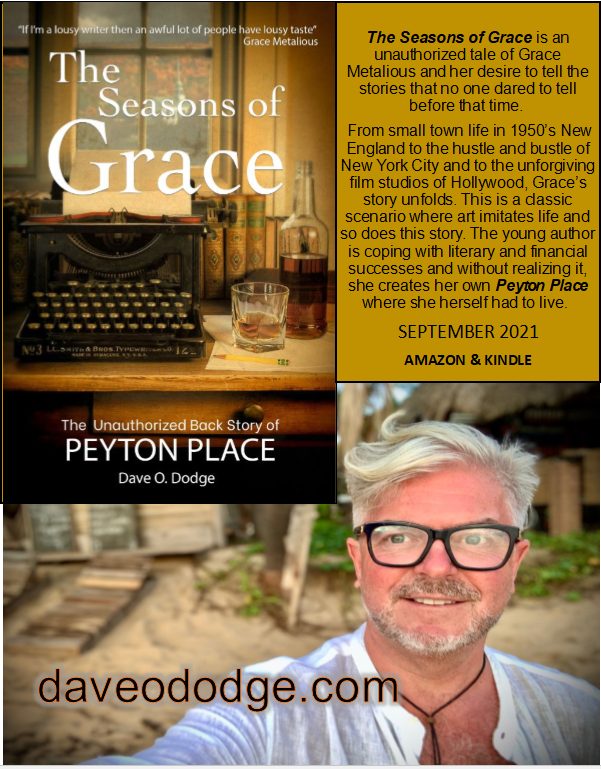 (PHOENIX) –International travel writer and former Valley PR and Charity Guru, Dave O. Dodge, has announced the release of his first-ever published book, “The Seasons of Grace”, which tells the unauthorized story of author Grace Metalious.

Dodge’s novel follows the life of Metalious, a New Hampshire native who wrote four novels during her successful career and is best known for her first book, “Peyton Place”, which became an unprecedented blockbuster when it was first published in 1956. Metalious’ book was dubbed “the first dirty book” and sold 12.5 million copies, with only The Bible selling more copies during the 1950’s. The book was also on the New York Times best seller list for over a year while at the same time being banned in numerous countries for its controversial content.

Dodge’s “The Seasons of Grace”, was released 65 years to the day of the publishing of “Peyton Place” and the novel thoroughly peels back the curtain with this fictional story based on the life of Metalious and her desire to tell stories, that no one dared to tell before that time. Her life, like her writings, was a whirlwind that created havoc and controversy with every strike of the typewriter with “Peyton Place” hitting on thought inducing and previously unspeakable subjects like rape, murder, incest, abortion, promiscuity, and adultery, all which Dodge analyzes and delves deeply into throughout his book.

“Grace Metalious was a female writer who grew up in poverty in a small New England town and her novels were unprecedented for someone with her background during that period in American history,” said Dave O. Dodge. “I wrote “The Seasons of Grace” to bring deserved recognition to this legendary writer who changed the game for all female writers during her era.”

Dodge, who spent time in Phoenix as a public relations guru, is a celebrated international freelance writer whose career has allowed him to travel around the world and back. At his core, Dodge bleeds New England blood and was raised in New Hampshire, just like his protagonist, Grace Metalious. His hometown gave him the inspiration to write his first novel about the fellow great New Englander.

“The Seasons of Grace” is currently available on Amazon and Kindle.

Dave O. Dodge, born and raised in New Hampshire, is an experienced travel writer, international tour guide, natural storyteller and owner of Ochenta y Dos [an urban bed & breakfast & spa]. Dodge has turned his many talents into writing novels with his first book, “The Seasons of Grace”. His novel thoroughly peels back the curtain with this fictional story based on the life of influential author Grace Metalious and her desire to tell stories such as “Peyton Place”, that no one dared to tell before that time. For more information about Dave O. Dodge, please visit his website DaveODodge.com. You can also follow “The Seasons of Grace”, on Facebook: The Seasons of Grace and Instagram: @the_seasons_of_grace.

ROCK IT UP Returns to Tempe Marketplace