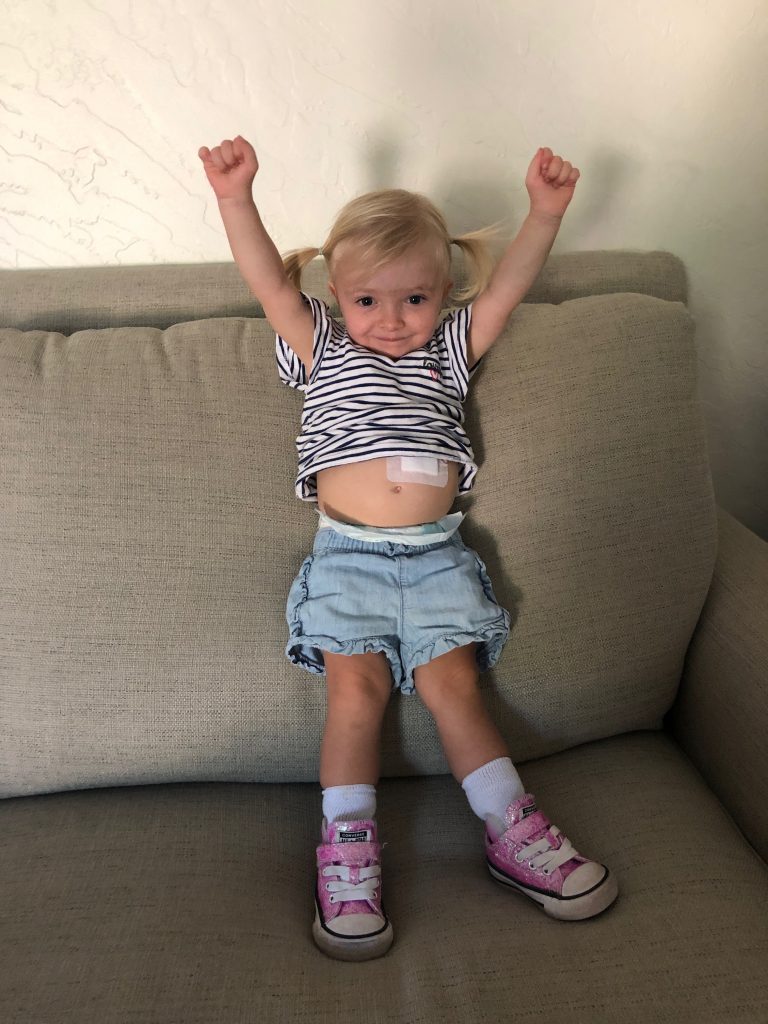 To strangers, Henley appears as a curious little girl, full of life and ready to experiment with new things. But what most people don’t realize on the first meeting is that Henley just accomplished an amazing goal. After having a feeding tube for most of her life, she made the progress needed to have it removed in July.

“It was just pride and amazing and kind of unbelievable,” says Henley’s mom Megan Beebe. “There were so many times through our journey that we thought she was never going to eat.”

Born weighing just four pounds seven ounces, Henley was diagnosed in utero with a two-millimeter ventricular septal defect, a hole in her heart. At seven months old the hole was successfully patched during open heart surgery, but it was around the same time that Henley’s parents learned she was missing information in her 15th chromosome, the likely cause of the hole. Other side effects of the deficiency are mobility, eye and vision, and feeding issues.

“The first couple months of Henley’s life it was very, very difficult to get her to gain weight,” Megan shares. “Eating was strenuous, and she would fall asleep.”

At five months old, Henley finally weighed eight pounds. It was at that point that Henley stopped eating and a nasogastric tube had to be inserted to make sure she was getting the proper nutrition.

When Henley was 11 months old, she transitioned to a gastrostomy tube hoping that without the invasive nasogastric tube in her throat she would be able to go through oral feeding therapy successfully.

In October 2018, Henley’s therapy began at United Cerebral Palsy of Central Arizona. As she worked through feeding therapy, Henley was able to overcome many of her oral aversions by getting used to things such as putting her own fingers in her mouth, her parents massaging her cheeks, and eventually experimenting with different foods and textures. She went from getting only thirty percent of her nutrition orally to getting eighty percent of it that way.

By January 2020, use of the feeding tube had ceased almost entirely, though Henley’s parents decided to leave it in through a double eye surgery she had in March and the birth of her younger brother in June. Finally, on July 5, the tube that had been part of Henley’s daily life for nearly two years was removed.

“We couldn’t believe we were actually taking it out, that she was going to be tube free for the first time in two years,” Megan shares. “It was an incredible feeling, it was amazing. All that work and effort, remembering how far we had come, it was just unbelievable.”

Since the removal, Megan says Henley’s appetite seems to have grown, and the toddler has even begun to experiment with using different cups. Henley’s developed a fondness for Cheez-Its, pears and ice cream. Her next therapy goals are to be able to stop using braces on her feet, and to learn to jump without fear.

“It’s amazing how much she’s gone through. Kids are so resilient, she’s so tough,” Morgan says. “But she’s just happy and full of life. You would not know everything she has gone through, dealt with, and is dealing with.”

“It’s a privilege and an honor to be a part of life changing stories, like Henley’s,” said Brenda Hanserd, CEO of UCP of Central Arizona. “The therapy and support that we offer at UCP makes tremendous difference in the lives of the families we serve.”

Before the COVID-19 pandemic, Henley was attending UCP’s Early Learning Center for her needs. Her physical and speech therapists come to UCP to work with Henley, her parents and UCP staff during her sessions. Telemedicine continues to be an option for many families during this time.

To learn more about United Cerebral Palsy of Central Arizona, visit here or join them on Facebook for the latest information on programs and reopening.