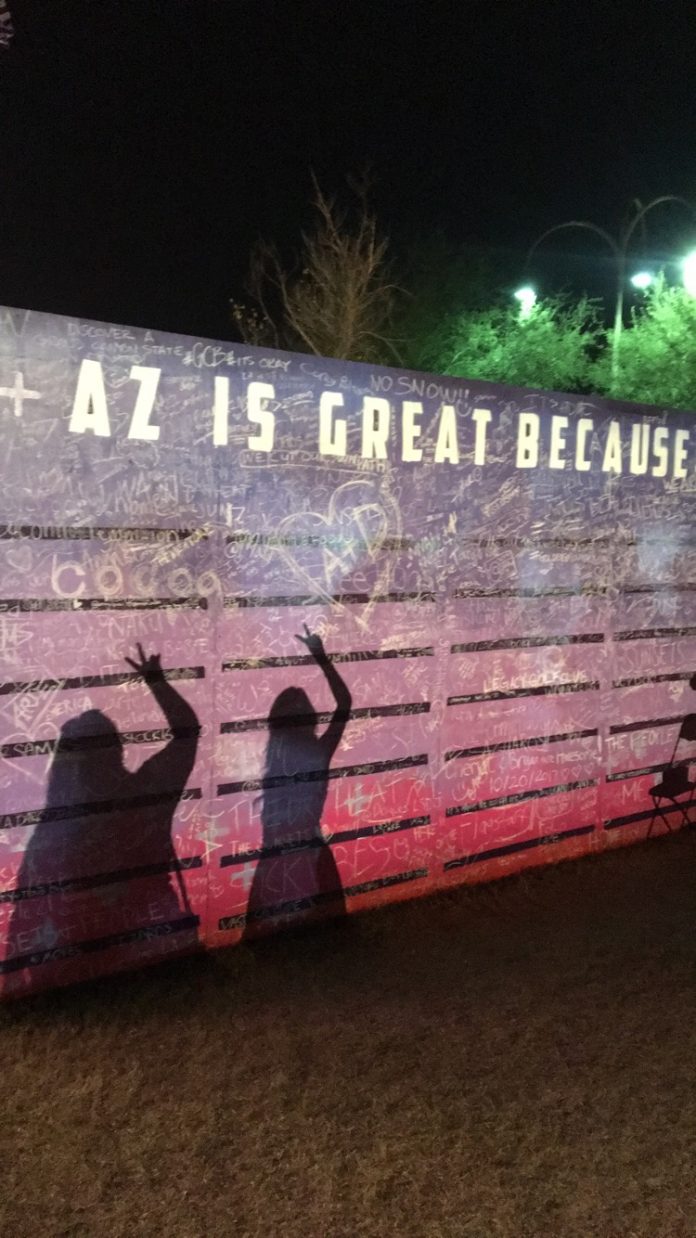 Over the span of three days and about 45 music sets later, Lost Lake Festival was the inaugural production of its kind in the Valley of the Sun, bringing with it diverse music, art, culture, and cuisine only miles from the heart of downtown Phoenix.

One of the first jaw-dropping aspects of the weekend, in fact, was the festival’s location. Secretly nestled over the grassy hills of Steele Indian School Park in Central Phoenix, the festival grounds transported attendees with diverse sights and sounds—encouraging its concert-goers to get lost, in all forms of the word.

Nano Rodriguez was an attendee for all three days of Lost Lake, and is not a new-comer to the music festival scene. Having attended other musical events in Arizona at Tempe Beach Park and Rawhide, he felt that the unique location of this festival was a huge selling-point.

“You hear like three or four stages at once and it’s an orchestrated chaos. You feel lost, like you aren’t in Phoenix. It transported me and I felt like I wasn’t here. This felt like a real, legitimate festival,” he said.

In fact, there is no reason that this production should have felt otherwise. Produced by Superfly, the creators of other large music festivals like Bonnaroo in Tennessee and Outside Lands in San Francisco, the wholesome organization of this festival was evident in all its forms.

“I feel that Lost Lake, in comparison to other music festivals that I have attended, was well-organized, well-planned and well-thought out. Logistically, it was excellent and the production value was seamless,” Rodriguez also noted.

Another admirable factor at Lost Lake Festival was its eclectic array of musicians spread out over the weekend. Bella Sisneros was among the attendees that were happily surprised.

“When I was buying my tickets months ago, what caught my eye of course were the headliners like Chance [the Rapper] and The Killers. But after a lot of the different sets that I already saw yesterday, I was pleasantly surprised,” she said on day two of the festival.

Showcasing both big-name artists like Chance the Rapper, The Killers, and Odesza, as well as smaller performers with local ties like Luna Aura and Playboy Manbaby, this festival had something in store for everyone.

“I was amazed to see Juanes on the lineup,” Rodriguez said. “Not only was it a multi-genre festival but it was also multicultural.”

Juanes, a Colombian two-time Grammy winner and 21-time Latin Grammy winner, had a set on the Echo Stage on Sunday, the last night of the festival. With his performance completely in Spanish, he pulled a smaller crowd in comparison to the larger stages throughout the weekend. In his closing remarks before ending his set, however, he said some closing remarks in English.

After thanking the diverse audience, he recognized that now, more than ever it is important to be accepting of those around you, even if they are different.

“Tenemos que respetarnos, agradecernos, y celebrarnos,” he ended with, which translates to his desire for people to respect, appreciate and celebrate one another.

Though it has not yet been confirmed that Lost Lake Festival will be returning to Phoenix next year, its trailblazing success was evident in the approval by its attendees.

“It was like a mini Coachella for Arizona,” Rodriguez noted. “Not because it’s cheaper or a wanna-be, but because of its smaller scale and Coachella-esque vibes. I think it was a pivotal ground-breaking experience that Arizona has never seen.”