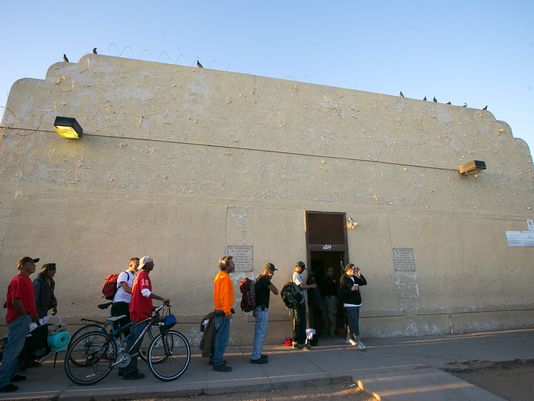 How do we define homelessness? The U.S. Department of Housing and Urban Development designs the terminology used to categorize individuals seeking homeless assistance with the Continuum of Care and updated its definitions in December of 2015.

The amended definition for the chronically homeless is, an individual or head of household that is a “homeless individual with a disability,” of the McKinney Vento Act, amended by the HEARTH Act, and have been living in a place not meant for human habitation, in an emergency shelter, or in a safe haven for the last 12 months continuously or on at least four occasions in the last three years.

Maricopa County contains the largest portion of homelessness of all geographic areas in Arizona, with a high amount that rests in the urban community of Phoenix. The sub-group of “Chronically Homeless” represent a significant amount of the homeless population in Maricopa County, state officials said.

The Arizona Department of Economic Security (DES), states in the 2015 Annual Report on Homelessness in Arizona, the total reached approximately 34,497 individuals. The Maricopa County Regional CoC is one of the three Continuum of Care (CoC) organizations designed in Arizona.

“The Phoenix Rescue Mission is dedicated to helping those addicted to drugs, alcohol, gambling, or pornography, any life controlling issue, that is keeping an individual on the streets,” Director of Marketing & Public Relations of The Phoenix Rescue Mission Nicole Pena said. “Our primary program focuses on long-term residential recovery for homeless and near-homeless people; we are currently working right now to build more housing to increase the number of beds we have available in our men’s addiction recovery program.”

The 2015 Point In Time (PIT) survey reported 9,896 people that experienced homelessness in Arizona on any given night. An estimated 14 percent, or 1,366 of the homeless identified as the sub-population, are the chronically homeless. The survey collected was before the amendment published the additional characteristics of an individual in the new sub-population of the chronically homeless. The aspects adjusted increases the total of homeless people in this subpopulation and is viewed as the main priority.

“In these upcoming months, I hope to see the Maricopa CoC make more of an effort to help with shelters in general, whether if it is the focus of just one overnight stay or a full week,” homelessness advocate Yasmin Tucker said. “Of course I want our government officials to accomplish the plan of establishing permanent housing, but the city of Phoenix needs to look at individual’s needs on a day to day basis, not just reaching the end of year goals.”

The 2015 PIT reported homeless individuals in Maricopa County of a total of 5,631. Of the total number recorded 4,342 of the individuals identified as sheltered people and the remaining 1,289 of individuals make up the unsheltered homeless.

Data collected for the DES annual report by the Maricopa Association of Governments Continuum of Care and Community Information and Referral, states the Maricopa County makes up 71 percent of Arizona’s total homeless population.

The DES presents two factors that could have impacted this increase of homeless individuals in Maricopa. The U.S. Census Bureau reported in 2014, Arizona’s population increased by 1.6 percent resulting in a jump from 6,626,624 to 6,731,484. The Bureau of Labor Statistics states the National U.S. unemployment average of Americans in 2014 was 6.2 percent in comparison to Arizona’s unemployment average of 6.9 percent.

“Maricopa County took a hit this year in their housing services for families; however, funding is increased for chronic homelessness and veteran homelessness, Social Work Manager of the Family Promise of Greater Phoenix Nicole Delgado said. Next in the process to get everyone safe and off the streets Delgado said is, “Affordable Housing, it is difficult for families and individuals to get back into safe and stable housing, especially if they have an eviction, felony, or insufficient income.”

The leading causes in Maricopa of homelessness, suggested by the DES, consists of economic factors such as jobs, evictions, foreclosures, and lack of affordable housing, each seem to have influenced the growth of first-time homelessness in Arizona. The DES annual summary report states the recently drafted statewide initiatives of former Gov. Jan Brewer, includes the creation of The Arizona Commission on Homelessness and Housing (ACHH). The commission developed a revised plan to prevent future homelessness.