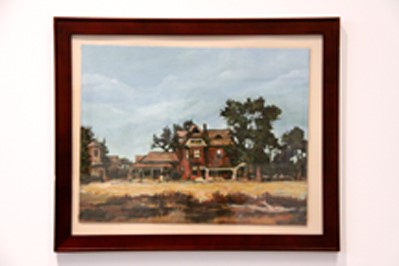 Originally published June 11, 2010 – Ever see the 1993 movie Six Degrees of Separation — the premise of which was that every person could be connected to anyone else by a chain of no more than five acquaintances? Researching today’s column reminded me of the film. Except, we may be talking about three degrees of not much separation.

Eduarda Harter Yates who put me in touch with Jana for more information about the duo, told me that a Jack Haehl painting of the Petersen House was on display at Tom Harter: Picturing Change in Tempe at the Tempe History Museum.

Eduarda Yates is Tom Harter’s daughter. Tom and his family lived in the Petersen House 1951-1968. Tom was an Art Professor at ASC when 22-year old Jack Haehl attended his classes. What’s that? Three degrees of separation? Hopefully you see where I am going.

So, at the same time that Jack and Mike were starting up their magazine, Jack was also pursuing his artistic talents in Tim Harter’s class.

Tom Harter had an unabiding love for the home that Niels Petersen built in 1892 – and saw unlimited artistic opportunities in the surrounding landscape.

Consequently the Petersen House was the frequent destination for class field trips. In a previous column we showed a photograph of Tom with a class — busy sketching and painting from the home’s wide front steps.

Jack Haehl captured a brooding portrait of an ancient relic from a bygone era – drooping overhang, a creaky old porch and the last days of a now-gone pump house.

It is a work considerably removed from Haehl’s edgy cartoons in Devil’s Inferno – revealing an entirely different side of a remarkably talented young man.

Often auditing Tom’s impromptu classes were his daughters – Susan and Eduarda, both of whom grew into accomplished artists themselves. Eduarda recalls: “It was easy for me when we held class at the old red house. I just headed out the front door.”

All the principals of this story have long been separated. Tom’s family moved out of the house in 1968. Tom passed away in 1981. Jack Haehl died in 1994. Eduarda still lives in Tempe.

But now Haehl, Harter and Eduarda are reunited after all these years in the wonderful exhibit at the Tempe History Museum. Along with a Tom Harter retrospective are paintings by some of his students including Jack and Eduarda whose works are virtual neighbors in the exhibition.

There you have it. Six degrees of separation — or close to it. The newly expanded Tempe History Museum is open Tuesday through Saturday 10-5, Sundays 1-5.

Visit the Petersen House Tuesday-Thursday, and Saturday 10-2 before it closes for the summer on June 27th.