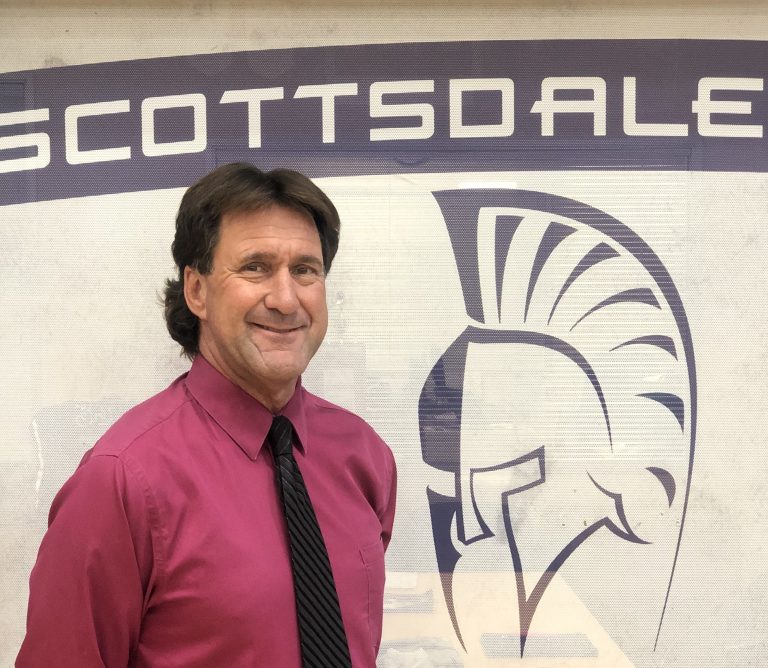 Great Hearts Academies is excited to announce that Duane Ediger, athletic director (AD) at Scottsdale Preparatory Academy (SPA), was voted AD of the Year for the 2A Conference. This is the second consecutive year Ediger has received this honor and the third time he has won this coveted award over his ten year career as an athletic director.

“I love what I do every day,” says Ediger. “Along with my co-workers in the athletic department, we work extremely hard to develop our athletes to perform at the best of their ability on and off the court/field while developing lifelong skills that can benefit them in post-secondary opportunities.”

The award is voted on by the 2A Conference athletic directors. Ediger has served as the 2A president for the last two years. The decision was made by members from the 48 other schools that are in the 2A Conference after Ediger was nominated by his region.

“This is a big honor and we couldn’t be more proud of Duane,” says headmaster of Scottsdale Preparatory, Alison Chaney. “We know how dedicated he is here, but to be recognized by his peers, two years in a row, just shows how great he is.”

Ediger has been the AD at Scottsdale Prep for five years. He oversees an athletic department that offers a full range of offerings for middle school and high school students. In SPA’s short time as an Arizona Interscholastic Association (AIA) member, the school has won nine state championships, eight state runner-up titles and earned the AIA’s Overall Excellence Award twice. The AIA is the governing body of Arizona high school athletics. Prior to coming to SPA, Ediger served at his previous institution for 28 years in the capacities of athletic director, assistant athletic director, teacher, counselor and coach.

Ediger will receive this award at the Arizona Interscholastic Athletic Administrators Association (AIAAA) Awards Luncheon in Prescott on Monday, September 10, at 11:15 a.m. The AIAAA was founded in 1982 by a group of high school athletic directors who realized that education and programs were needed to foster higher standards of professionalism with the ranks of Arizona’s high school athletic directors.

Scottsdale Preparatory Academy is a member of the prestigious Great Hearts Academies network of prep schools in metro Phoenix. The public charter school has more than 760 students in grades 6th through 12th. It is located at 16537 N. 92nd St. in Scottsdale.