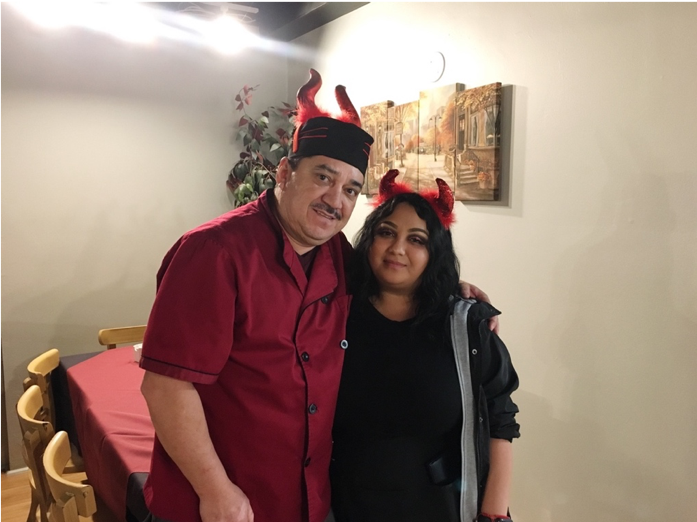 After a lifetime of working for Italian based restaurants, a West Valley man has finally been able to achieve his lifelong dream: opening up his own restaurant.

Jaime Rivera is the current owner of The Pasta Factory in Avondale, Arizona, a local, family-owned Italian food restaurant.

Getting to this point in his life came with many challenges, including moving to a new country at a young age and even facing cancer, but Rivera has finally made his dreams a reality.

His 27-year-old daughter, Yesenia Rivera, who works at the restaurant as a server, says that ever since she was little, she would always hear her dad talk about opening up his own restaurant.

Seeing it become a reality in front of her own eyes has encouraged her to to work hard in her own life for everything that she desires.

“I’m just proud,” she said. “Words can’t express what walking into a place that your father worked so hard for feels like. It just feels amazing and it makes you want to work harder for your own dreams and goals.”

Rivera was born in Nayarit, Mexico, in San Pedro Lagunillas, a town with a population of about 7,000 people. There he lived with his parents and seven siblings.

As a child, he worked with his father in the fields of his town and would eat tortillas with salt on a daily basis, a meal he says was all they could afford.

Regardless of being so young, Rivera’s father was able to implement a hard work ethic and a humble personality in him from the beginning, something that would serve him well for the years of work that were headed his way.

At 11 years old, Rivera experienced one of the biggest challenges in his life – moving to California without knowing any English or anything about the foreign country he was now in.

He would, however, soon experience some of the most pivotal moments in his life that would lead him to want to open up his own restaurant in the future.

A vivid memory Rivera has that helped shape him to who he is now is what he experienced during gym class as a child. Only speaking a minimal amount of English, Rivera says that all the kids in school would taunt him and even go as far as filling his Mexican-styled boots that he would take off for gym class with water. Rivera was upset, but his parents made sure to let him know that he shouldn’t stop participating in his culture because of an unaccepting community. “That’s when I started to say you know what, I’m going to demonstrate to these people that I am better than them,” Rivera said.

Fast forward to when he was 15 years old, Rivera said that this was the climatic point in his life where he knew that one day, he wanted to open his own Italian restaurant. He began working for a family-owned Italian restaurant in Los Angeles where the owners themselves were from Tuscany, Italy. Because he was young, he could only work as a bar assistant— making cappuccinos and helping out the servers however he could.

What started as a job to help support his family though, blossomed into a job where he would spend the next 16 years of his life garnering a love for Italian food, learning how to speak Italian himself, and learning just how much he loved working with people. While he was working his first few years at the restaurant, he attended the University of California, Los Angeles, where he began studying culinary. He was unable to finish all four years of college but continued to work for the family owned restaurant he was so dedicated to, as well as a local country club.

Rivera also met his wife during this time, and once they began building their family, they decided they needed to move away. When the year 2000 came around, Rivera said that he wanted to leave the area of Los Angeles, as he said he felt it was too dangerous at the time to raise his kids in. It was on a trip to visit his sister in Arizona that he decided that the West Valley would be the place where they would move to.  It was this decision that would help him further shape his future as a restaurant owner.

When he moved to Arizona, Rivera already knew that he wanted to open up his own restaurant, but the timing wasn’t right.  He had six kids and two of them were infants, so he knew that he would have to wait until they were old enough to even think about starting the process. Yet, Rivera still wanted to work for an Italian food-based restaurant, so he began working at Olive Garden as a server.

He was able to move up positions throughout his 19 years with the company at different locations in the West Valley. Most recently, he was the general manager of a staff of about 120 people in the Westgate Entertainment District in Glendale. All these years of experience paid off he says, even if he hadn’t owned his own restaurant, he was confident that being in the restaurant business for 35 years had served him well and taught him how to run a restaurant.

At some point, Rivera started wondering why he was doing all this work for another company when he could do it for himself, so he began putting together his plans for what he was holding off on for years.

Then he was diagnosed with cancer.

“Four years ago, I was going to die,” Rivera said. “I had cancer, and it was bad. I told [my family] that I wasn’t going to go, that I was going to be okay, and I am. I’ve been cancer-free for three years.”

Rivera says this was only a setback that made his push even forward for himself and his family and made him realize how he should take advantage of every single moment in his life.

Thus, the process of opening up his restaurant began. “When I started my process, it was so hard,” Rivera said. “They didn’t believe in me.”

He says that the hardest part of the process was getting the community to trust him, as the city would constantly tell him that it wouldn’t be easy to get through to the people in Old Town Avondale, as they didn’t love the idea of having new establishments put into their community.

Once he acquired his permit and key to the location though, his family started putting together all the pieces and had their grand opening on Sept 28. 2019. Today, Rivera hopes more than anything that he will be able to help and serve people that cross his path every day, and he already has.

Avondale resident Yasmin Acosta, who has become fond of the restaurant, says that her trips to the restaurant have made her appreciate the hardworking people like Rivera in her community.

“I’m Hispanic myself, so I support any local Hispanic restaurant,” Acosta says. “They make me know that Hispanics truly have a big place in the U.S. They show a big resemblance of hard work and dedication, and this family truly nails that.”

With the process of opening up his own restaurant, Rivera hopes that he will also be able to teach his children a few lessons.

“I know it’s a lot of time that you have to put into this business, but it’s worth it,” Rivera said. “I’m always teaching them to believe in themselves. If they want something, then they can get it, but it is on them. Nobody else will do it for them.

His daughter Yesenia says that he has taught her to push forward no matter the situation and hopes she is able to make him proud of her own decisions.

Rivera says getting to this point in his life is only the beginning. Opening up one restaurant was his first achievement, and with certainty, Rivera says that he will continue to grow.

“Working for your own self and having your own business is good but I’m not stopping here,” Rivera said. “This is my first restaurant, and then I’m going to open more. I want to move up and open more and get people to work. I want to demonstrate that Hispanics can do it too.”