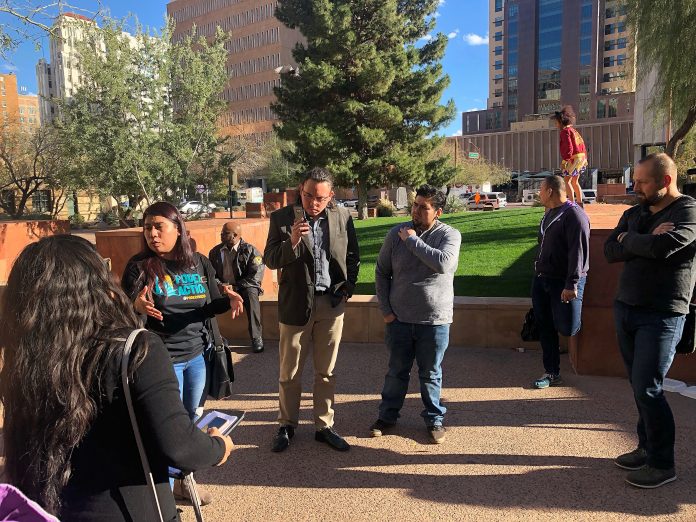 The Phoenix City Council approved approximately $5.7 million in funding for the city’s police department to purchase 2,000 body cams for officers to wear on duty, in Wednesday’s meeting, in an effort to be transparent with the community after last year’s rise in police shootings.

In a 7-1 vote, with Vice Mayor Jim Waring voting no without comment, the request for funding of police body-cams, along with relevant technology, such as data storage, and 21 new positions in the police department handle the footage. The $5.7 million comes now and purchases the cameras from Axon Enterprise, Inc. and the request also calls for $16.7 million through fiscal year 2022-2023, according to the ordinance S-45348.

While this vote did not set policy for the police wearing the cameras nor did it confirm an agreement with the Phoenix Law Enforcement Association, the police’s union, many citizens spoke for the passing of the ordinance and pushed for stricter policy. Parris Wallace, the community college organizer for “Poder in Action” an activist group looking to “disrupt and dismantle systems of oppression” in Arizona, according to their mission statement, spoke in favor of stricter policy before the vote.

“We’ve seen and felt the culture of violence from unnecessary arrests to the shooting of 44 people last year and the killing of 23,” Wallace said. “We do not and cannot trust this department and as we’ve said for several years body cameras are the bare minimum, the absolute bare minimum and the steps that can be taken towards transparency.”

Wallace said that without the policy in place to fully punish officers for not turning on cameras, that this would be a waste of the city’s money. She also said she was concerned about the use of the facial recognition software to target people involved in the incidents.

Shawn Severud, another citizen at the meeting, said that the city needs to improve the speed at which it acts, prior to the vote.

“I want to point out how long this process has taken to get to this point. We’re the fifth largest city we need to start getting our act together, whether it’s this or levels of pollution it’s time to start acting like adults,” Severud said. “It needs to have teeth so if an officer chooses to turn off the camera there is real punishment, there doesn’t need to be any redactions.  I’m concerned with the way this city functions sometimes with delayed release. I’m worried about redactions and editing.”

Prior to the council’s vote, the council members were able to ask Phoenix Police Chief Jeri Williams and Executive Assistant Chief Michael Kurtenbach questions about the request. Councilwoman Vania Guevara asked for clarification about delay of video releases that was spoken about in the public comments.

Kurtenbach said, “with the redaction tool, if we’re approved, will allow us more expediently to blur out, if video, or to redact audio that is imprudent for release so we can prepare case files more quickly, so those cases can move along and so we can properly process public record requests.”

Prior to the vote, Williams said that the public does not need to worry about the officers turning cameras on and off, although those who do turn them off will be punished.

“We have auto activation as one of the main features in the system. You don’t have to worry about officers turning cameras off or on because of auto activation features,” Williams said. “Our officers who don’t turn on the cameras will at a minimum receive a written reprimand and that is in the policy.”

Kurtenbach said that the police department’s policy for the cameras, which he wrote, sets the rules for when and where officers are required to have the cameras on, prior to the vote.

“The camera would not be on at all times; the officer would have the opportunity for a lunch break or go to the bathroom,” Kurtenbach said. “The policy specifies when the cameras will be on.”

Reverend Reginald D. Walton said he supported this plan, prior to the vote, and said it would have a large impact moving forward.

“I would hope that you take a look at yourselves as you vote. This is historic,” Walton said. “You have the chance to help to make it better, for law enforcement and for the community at large.”